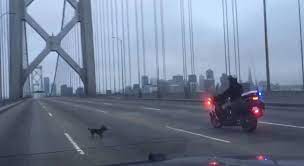 For a brief Sunday, the “C” in CHP stood for Chihuahua, who leads police. That’s because a black dog led what police describe as a high-speed pursuit over the Bay Bridge between San Francisco and Oakland before being placed in official custody.

The dog’s only identifying tag — black, with a silver human skull. It cemented his status as a hardcore animal who’s not wowed by authority. His flight from the law was captured on a dashboard camera. And it posts on social media in what quickly became a well-liked video.

It took at least three units — two officers on motorcycles and one in a car — to corral the animal. Which had been streaking its way toward San Francisco.

Police issued a call for help finding the dog’s owner, asking on Facebook, “Missing a Chihuahua?”

At one point in the chase, the dog appeared to toy with his pursuers, stopping to face an officer on a motorcycle — who then started to dismount from his machine — before tearing off again.

The Associated Press adds, “After it captured it, it took the Chihuahua to a San Francisco animal shelter where staff members named it Ponch after the CHP Officer Frank Poncherello played by Erik Estrada in the TV series CHiPs.”

On Monday, San Francisco Animal Care and Control officials sent an update on Ponch, saying he’s doing well, “but he would love to see his family.”

Actor Erik Estrada retweeted that message, much like he did after seeing an earlier tweet about the Chihuahua’s escapade.

Ponch is doing well this morning

@ErikEstrada, but he would love to see his family. #BayBridgeDog

If keeping just one dog can seem like a problematic commitment sometimes,…
We use cookies on our website to give you the most relevant experience by remembering your preferences and repeat visits. By clicking “Accept”, you consent to the use of ALL the cookies.
Do not sell my personal information.
Cookie SettingsAccept
Manage consent