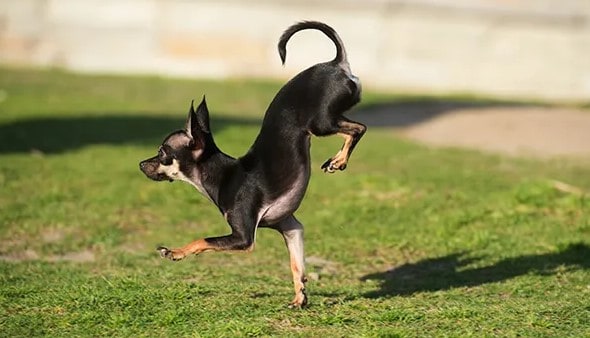 Konjo is an adorable name, but it is also the label of this record-breaking Chihuahua that recently made the news. Continue reading to find out more.

Jiff, the pomeranian dog, hit the headlines when the 2015 Guinness World Records book hit the shelves in September last year. The talented pooch was celebrated for his ability to walk on his front and back paws at a fast rate. He set new records titles for ‘Fastest time to complete 10 m on hind legs by a dog’ and ‘Fastest 5 meters on front paws by a dog”.

Coupled with a celebrity fanbase and fame in a Katie Perry music video, Jiff had it all. But records are made to be broken, and there’s a new lady on the scene named Konjo. The half Papillon, quarter Jack Russell, quarter Chihuahua from Tusti, California has stepped up to claim a piece of the glory. Check out the video below.

Konjo has claimed the title for the fastest 5 meters on front paws by a dog with a time of 2.39 seconds. She smashed Jiff’s record of 7.76 seconds. The attempt occurred at Tustin Sports Park, Tustin, California, USA. Owner Julia Pasternack was confident about Konjo’s ability when she first contacted the Guinness World Records team.

“My dog, Konjo, will break the recently added record of the fastest dog on two paws.” “Baby Konjo, as she is so lovingly called, is a very special 2 lb papillon/chihuahua mix. She walks on her front paws daily at a speed surpassing the existing title holder,” wrote Julia. 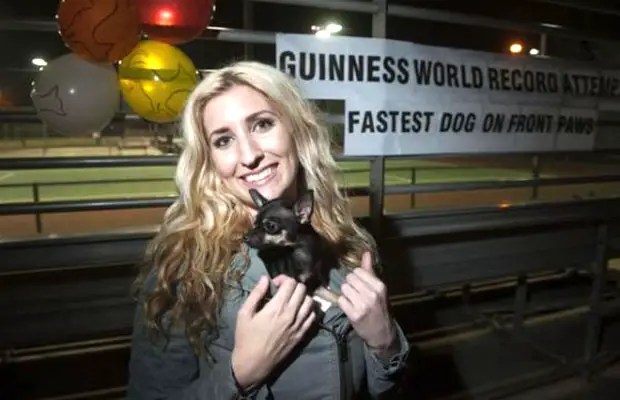 The Story Behind the Pup

She explained how Konjo first started to run on her front paws. “She started walking on front feet when she was a puppy and does it 100% naturally. My theory as to why she started doing this is that her center of mass resides primarily in the front, allowing her better balance. Her smaller stature probably makes her more agile.”

“She grew up in a two-story home. Because she is so tiny, the height of the staircase step now becomes comparable to her overall length. This allows her to go down at a steeper angle and thus become used to putting total body weight on her front feet.”

And why does Konjo continue to show off her talents? “My veterinarian believes she continued to walk on front feet due to positive affirmation she may have received.” And, being so small, Konjo doesn’t require a whole lot of food.

“I’m still on her first bag of dog food,” says Julia. “It’s been over a year and a half.” Julia seemed to be confident about Konjo’s extraordinary speed and balance. Now, is there a dog out there that can run even faster?