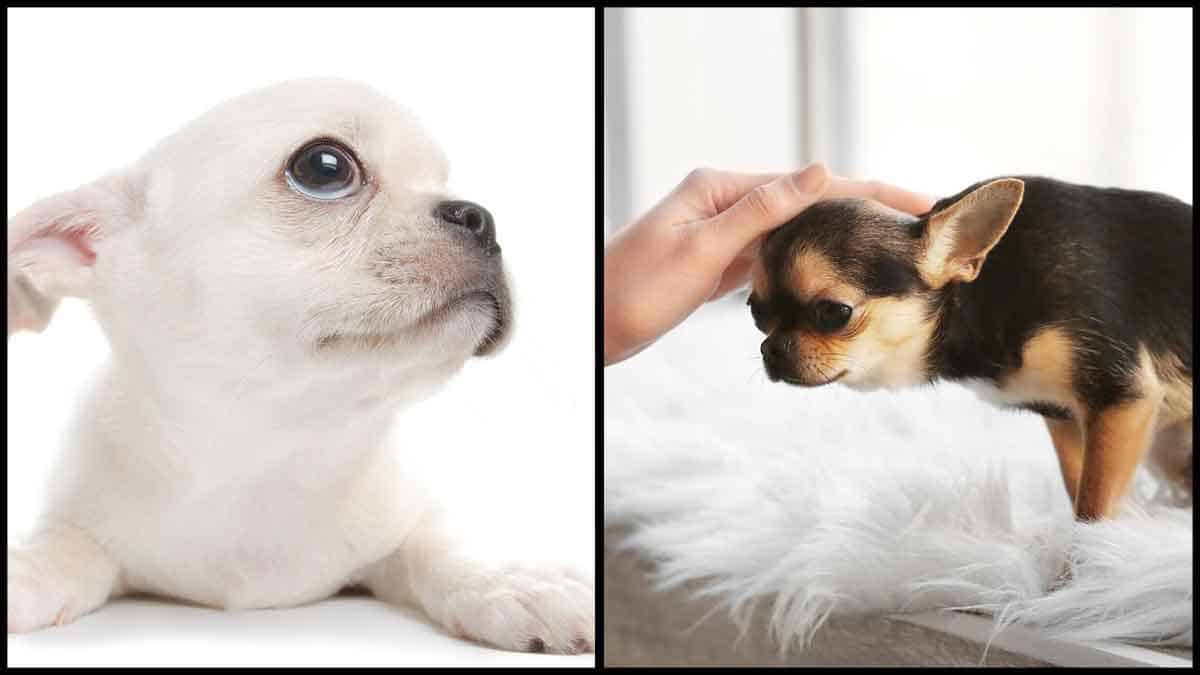 Hydrocephalus is a condition where cerebrospinal fluid builds up in a dog’s skull, putting pressure on the brain. It is also sometimes referred to as “water on the brain.”

It’s a serious condition that can result in permanent brain damage or death. It’s often congenital, meaning it’s present at birth, and certain breeds have a predisposition to the condition, especially small dog breeds.

Mild cases are sometimes treatable with medication, but puppies born with the condition are often euthanized because surgery is expensive. If you see the signs of hydrocephalus in a dog or puppy, then you must consult your veterinarian immediately.

Here’s what you should know about the symptoms, causes, and treatments for hydrocephalus in dogs.

Symptoms Of Hydrocephalus In Dogs

Some dogs show no symptoms at all of hydrocephalus. Although, if it goes untreated and fluid continues to build in the skull, it’s likely that signs of pain and other symptoms will appear. Sometimes a puppy’s head will appear enlarged because the skull hasn’t fused yet.

If you see these signs or any of the following symptoms in your dog or puppy, consult your vet immediately:

Causes Of Hydrocephalus In Dogs

There are different causes of hydrocephalus in dogs depending on whether the condition is congenital or acquired later in life. Congenital means the condition is present at birth and is often the result of genetics.

Certain breeds, especially small breeds, are predisposed to the condition, including:

Congenital hydrocephalus may also result from a brain hemorrhage in a newborn after difficult labor, exposure to certain drugs during pregnancy, or prenatal infection.

Acquired hydrocephalus may appear due to a Vitamin A deficiency, parainfluenza virus, intracranial inflammatory disease, swelling in the brain, or other infection.

However, the most common cause of acquired hydrocephalus in dogs is brain tumors.

Treatments For Hydrocephalus In Dogs

If hydrocephalus in dogs is mild and caught in the early stages, then it may be treated with medication. The goal is to reduce the inflammation or the production of cerebrospinal fluid.

Usually, vets prescribe corticosteroids this purpose. Sometimes, they may also prescribe anti-seizure drugs and other medications to treat the symptoms.

However, in some cases, surgery is the best option for treatment. The procedure involves placing a shunt that redirects cerebrospinal fluid away from the brain and into the abdominal cavity where it can then be easily reabsorbed by the body.

This surgery requires a brain surgeon and is usually expensive, so many dogs never receive it and are euthanized, instead.

Vets generally treat cases of acquired hydrocephalus by focusing on the underlying causes. They may use medication, surgery, or radiation and chemotherapy in cases of tumors.

It’s important to see your vet at the first signs of hydrocephalus and allow them to determine the best course of action. When treatment begins early, it can prevent brain damage, and dogs can mostly make a full recovery.

Have you ever cared for a dog with hydrocephalus? Did your vet treat the condition? Then let us know in the comments below.