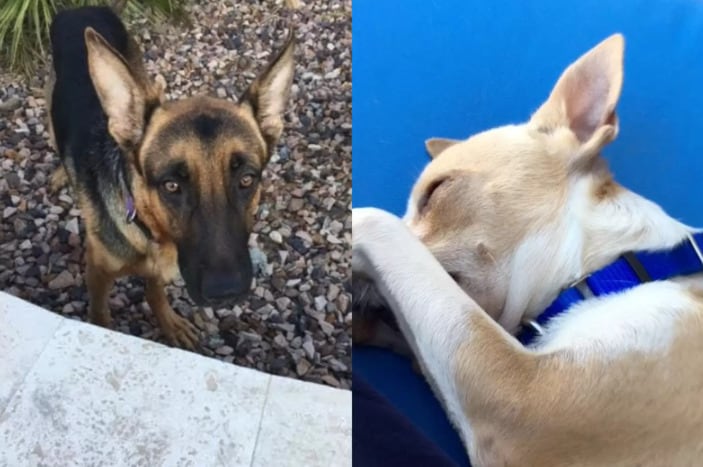 Have you ever met a Chihuahua?
Then you know what a good heart they have. Read a story about a bit of shelter Chihuahua.

They never leave each other’s side. And need to find a home together 💕. As a pair, Jefe and Jericho are quite contrasting sorts of canines. But, despite their differences in size and breed, the two sweet pups are downright inseparable. And they’d like very much to stay that way.

The two dogs were surrendered by their former owner to Emergency Animal Medical Technicians from the Arizona Humane Society. And there was little doubt that their bond to one another was more profound than most. Sadly, though, one of the dogs was sick.

“From the moment it rescued them, it was clear that Jefe and Jericho were best friends,” Ashleigh Goebel, from a shelter, told The Dodo in a statement. “Animal rescuers were surprised to find a sick, malnourished, tick-infested German shepherd, Jericho, with a small Chihuahua enduringly lying on top of him when they arrived at the scene.”

Jefe became frantic as rescuers lifted Jericho to get medical attention, so they headed to the Humane Society’s trauma hospital as a pair. “It was then clear that the two were extremely bonded and would have to be adopted together,” Goebel said.

Fortunately, JeJericho’sondition has improved, but hehe’llequire daily medication for valley fever to keep healthy and active.

Throughout the recovery, Jefe has stayed by his BFBFF’side.

Now that Jericho is doing better, the Humane Society hopes to find him and Jefe a loving home.

After all, who could ever force these two apart?

Folks interested in adopting Jefe and Jericho have been asked to call the Arizona Humane SoSociety’slternative Placement team at (602) 997-7585 ext. 2156. To learn more about other adoptable pets in the area, visit the shshelter’sage on Facebook.