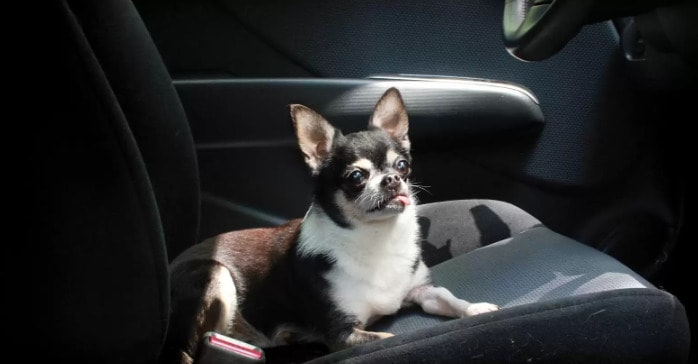 She had no idea she’d be so happy and healthy four years later. Just one night. That’s about all the time Heather Hayes expected the ancient and very sick shelter Chi to live.

As marketing manager at the Asheville Humane Society in North Carolina, she frequently passed the kennel of the trembling dog who spent her days hiding under her bed.

But one day, Hayes passed the kennel – and the trembling dog was staring back at her.

“The staff at the shelter wondered if she was even adoptable because her health was so bad,” she tells The Dodo. “I said, ‘Let me take her home for a night, and if we decide she doesn’t have a quality of life, and we have to let her go, I want her to be at home.

And she told her husband as much when he came home asking about the strange little dog with the tongue that refused to stay in her mouth.

And she told her husband as much when he came home asking about the strange little dog with the tongue that refused to stay in her mouth.

The sudden infusion of love seemed to agree with the supposedly dying old dog. She was still there the next day.

And if she was going to be sticking around, she would need a name.

“She was surrendered to the shelter as ‘Jersey Girl,'” Hayes explains. “We decided we needed to give her a better name. Josie … Jazzy … and my husband said, ‘Why don’t we call her Jay-Z?’ “And then she looked right up at him when he said it. That’s why she has a boy name even though she’s a girl.”

Life, it seemed, was not quite a wrap for Jay-Z. She found a fresh footing with her new siblings, all former shelter dogs making the most of new lives.

“Jay-Z was the first dog and senior I adopted,” Hayes says. “After we adopted her, we took four more senior and special needs dogs. And now, Jay-Z has her pack of senior rescue Chihuahuas.”

“Jay-Z was the first dog and senior I adopted,” Hayes says. “After we adopted her, we took four more senior and special needs dogs. And now, Jay-Z has her pack of senior rescue Chihuahuas.”

“It is so rewarding to bring home animals who are overlooked and give them a family,” she adds. But no dog packed a bigger reward in the tiniest form factor than Jay-Z.

Realizing the dog wasn’t leaving her soon, the couple began taking her along on epic expeditions.

Jay-Z climbed alongside Hayes to the top of North Carolina’s towering Mount Mitchell. She gazed at the ocean for the first time in her life. She even picnicked at the famed Biltmore Estate.

No one’s quite sure of Jay-Z’s actual age – although it’s undoubtedly somewhere around ancient. But it’s been four years since Jay-Z came home to spend just one night with this family.

And she’s been motoring ever since.

She’s had few health scares along the way. Hayes even keeps a tribute letter in a drawer, thinking she will publish it in the event of the dog’s demise.

Whenever that should happen.

“She has the most incredible will to live of any animal I’ve ever known,” Hayes says.

But when that end finally comes, Hayes can take comfort in knowing she taught an old dog the most critical new trick of all – to be loved is to live.

“Jay-Z taught me to cherish senior animals, who need love and comfort the most in the final years of their lives. Like people,” Hayes writes in the practice letter for the dog’s funeral.

“She taught me to appreciate the little things like basking in a sunbeam together or sleeping in late, cuddling on a Saturday morning,” she notes.

“I will never forget her sweet face, her howls at the firetruck, her licks on my arm, or her little trademark tongue, as long as I live.”