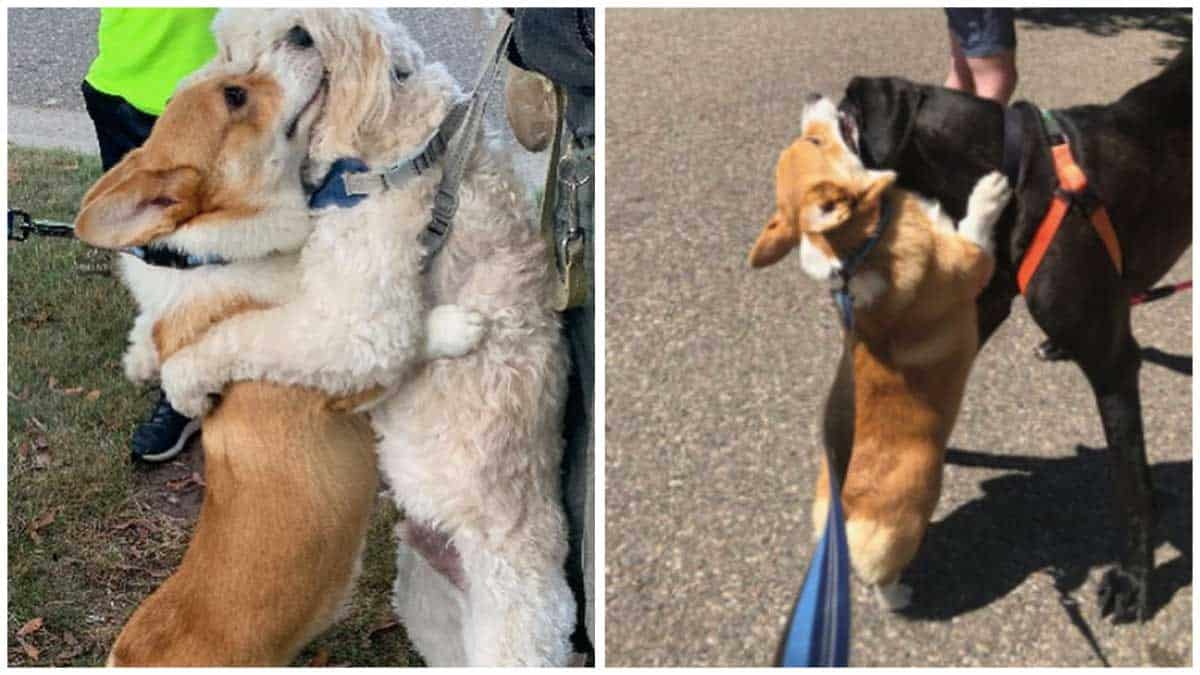 Loving Corgi Hugs Every Dog He Meets On His Walks

Wallace understands that times are tough, and the loving corgi knows how to make things better — with a big hug. Well, as big as his little arms can go.

When Noah Raminick is walking Wallace, he can expect to stop every time Wallace spots another pup. The year-old corgi loves to play and won’t let another dog walk by without giving him an embrace.

“He’s the biggest sweetheart,” Raminick, Wallace’s brother, told The Dodo. “He’s always very happy to be around people and other dogs. He loves to give face kisses to people and when he sees another dog, he’s always the one to initiate a play session.”

When it comes to large dogs, the low-bodied pup shows no fear and will stand on his hind legs to get the best possible angle for his hug. Wallace’s best friend Daisy is a Great Dane, but the corgi knows that size doesn’t matter.

“They always hug when they see each other,” Raminick said. “And one of her paws weighs as much as Wallace’s entire body.”

With smaller dogs, Wallace makes sure to play gently, so he doesn’t spook his new friend. Wallace won’t go in for the hug until he sniffs out whether the other dog is OK with it first.

“The thing I find interesting with his hugging is that he wasn’t trained to do that at all,” Raminick said. “I think it comes down to him being really excited about playing with another dog.”

Wallace makes sure to spread the love when he’s with his human family, too. “His favorite things are morning and evening cuddles, playing fetch, and me chasing him around the house,” Raminick said. “I don’t think Wallace has any dislikes.”

Wallace’s family is happy for their pup to continue spreading the love to the dogs and people in his neighborhood, adding a little more joy to everyone’s day.