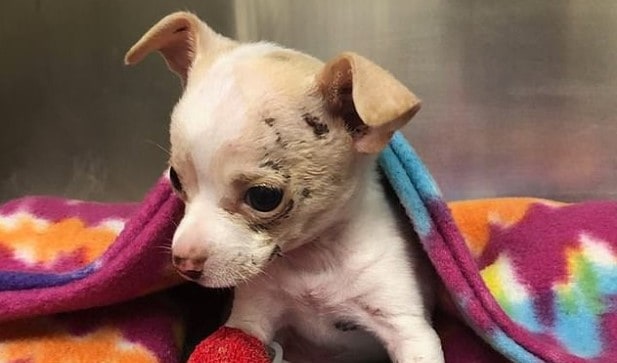 A little dog is lucky to be alive after being snatched by a hawk and then falling to the ground by the bird of prey.

Incredibly, the tiny Chihuahua, who weighs just 1lb, had no broken bones but had several scratches and punctures to its skin from the Texas hawk’s talons.

The puppy was found after a group of construction workers in Austin heard the dog crying.

When they went to look for it, the puppy fell to their feet in midair. As the workers looked up, they saw the hawk flying away.

The little dog has since been named Tony Hawk, after the pro-skater.

‘This teeny tiny guy was picked up by a hawk and then dropped from midair,’ the Austin Animal Center wrote on their Facebook page.

‘We’d like to introduce you to this nugget, who we’ve all taken to calling Miracle Puppy. It’s a miracle that he not only survived but that the wounds on his head and chest are fairly mild.’

The veterinarian who took care of the pup, Lindsay Riddick. I told KVUE that the workers and the care team are delighted that the dog would survive.

‘We are so happy that this little fighter will live on to tell an incredible story,’  she said.

Tony Hawk looks far better now than when he was taken to the emergency clinic.

Right after the attack, he had some puncture wounds on his head, in his ear, and one on his chest, but luckily no broken bones, and his injuries are now healing up nicely.

Once the dog’s condition had improved, Renee Keyes, who has fostered animals for years in the Austin area, took care of him.

The family expects to have Tony Hawk for four weeks before adopting him.

‘It was immediately well, I have to him you would think at least a broken bone but nothing he’s a lucky lil’ guy,’ said Keyes.

‘He’s so tiny, so you can easily see why he might be mistaken for a rat and prey.’

‘We will give him lots of love and socialization. And then I will pick the perfect home for him to be adopted,’ said Keyes.

Austin Animal Center says owners must protect their small pets from wild animals. Wildlife, such as hawks, owls, and coyotes, all prey on small animals.

‘Let Miracle Puppy’s story be a reminder to protect your small pets from wildlife,’ said the shelter. ‘Hawks, owls, and coyotes will prey on small animals, even in your fenced backyard. If you have small pets, keep your eyes on them at all times while outside.’