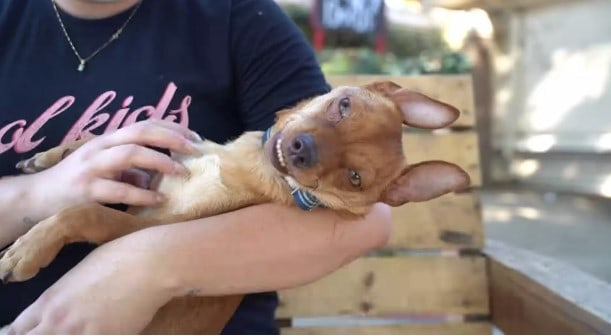 Meet this Chi With a Rare Condition (Smiling All the Time)

Jasper, a Chihuahua mix, has a rare condition that causes the muscles in the pup’s face to pull back as if he is smiling. This is according to the Front Street Animal Shelter in Sacramento.

There’s a dog at the Front Street Animal Shelter in Sacramento that can’t stop smiling!

“Meet the shelter dog who can’t stop smiling,” the clip said on-screen. “Jasper has an unknown condition that affects his facial nerves, causing them to pull back into a constant smile. Sadly this is uncomfortable for him and causes lots of twitching, and he has kidney problems.”

“He looks happy on the outside, but that’s not how he feels,” the shelter wrote in the caption, later adding, “We are intent on trying to give him a happy life, but the tests and treatment will be very expensive.”

In the video, the shelter said on-screen, “We are determined to give him a good life.”

The Rare Condition that Changed Everything

Haley Waugh, Front Street Animal Shelter’s public information coordinator, told CBS Sacramento that their goal is to make Jasper as happy and healthy as they can.

“I think everyone that sees him just instantly smiles. It’s kind of the first thing you notice when you see him is he has a big old smile on his face,” Waugh said.

She added, “He might not have the most time left but we’re going to do whatever we can to make the best of it and give him as much time here as we can as comfortably as possible.”

Once Jasper heals, the next step will be finding him a forever home. “We’re also hoping to find this sweet boy a home,” the shelter wrote in the video. “He is great with other animals and loves everyone he meets.”

The Front Street Animal Shelter is raising funds for Jasper and other animals in their care through a GoFundMe campaign titled “Give life and happiness to shelter pets.”

Despite a rough start as a “bait dog,” she’s a smiley girl.…
We use cookies on our website to give you the most relevant experience by remembering your preferences and repeat visits. By clicking “Accept”, you consent to the use of ALL the cookies.
Do not sell my personal information.
Cookie SettingsAccept
Manage consent