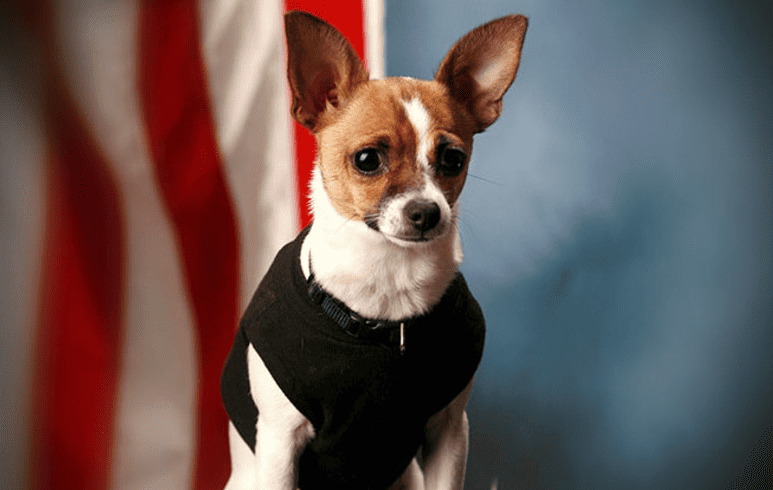 The smallest police dog is Midge, a chihuahua/rat terrier cross who measures 28 cm (11 in) tall, 58 cm (23 in) long. She works as an official Law Enforcement Work Dog. And has an owner, Sheriff Dan McClelland (USA), at Geauga County Sheriff’s Office, Chardon, Ohio, USA.

Midge passed her Ohio Certification as a Narcotics Dog on 7 November 2006. She is alert to the presence of marijuana. And they can use her for arrests, search warrants, and drug seizures. The courts and judges also recognize her actions.

Midge accompanies Sheriff McClelland on all his daily meetings and calls responses. She participates in search demonstrations and anti-drug messages to the Public. And she is small enough to search school lockers (completing her first at only six months old!) and does regular drug checks of inmates’ property at the county prisons.

Unlike her larger counterparts, when on drug raids she would not tear the upholstery of a car or leave muddy paw prints.

Her size meant she had no problem searching underneath vehicles. And she was able to sleep on her owner’s lap as he sat at his desk.

Mr McClelland’s successor Sheriff Scott Hildenbrand recalled: “He used to joke that people would see him in a parade in a car and would say, ‘Hey, there’s Midge and whatshisname’.

“I think she was more popular than him.”

Being the smallest police dog, Midge is always petted and loved by other police officers. Despite the fact that she can often get irritated.