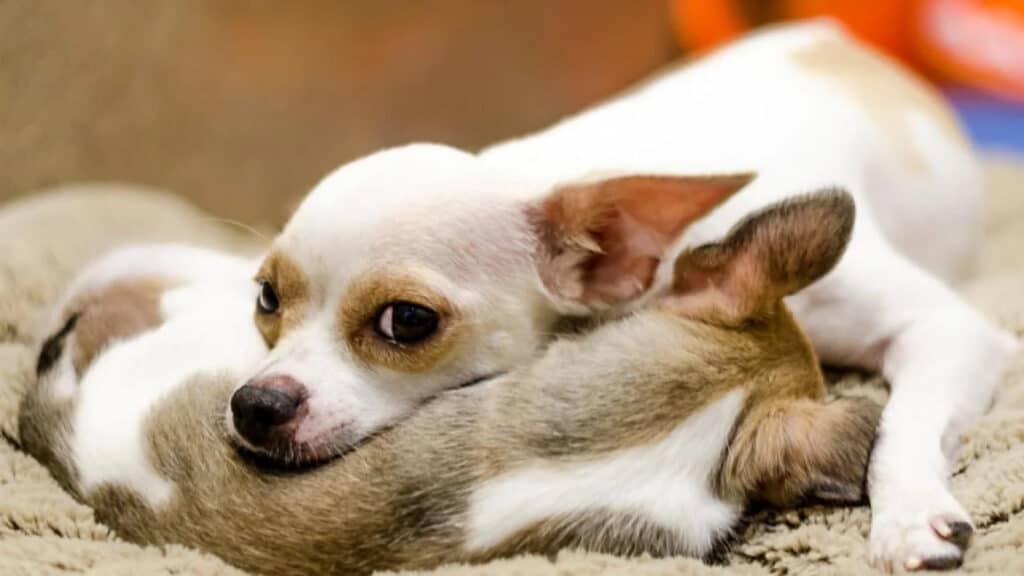 Protective Chihuahua dog goes from “toughest puppy mom” too little sweetheart after she realizes caregivers were there to help her and her pups.

When Pinky came to the Sanctuary, she had only one thing to say to people: “Don’t mess with me, and don’t even think about messing with my pups!”

The tiny, angelic-looking Chihuahua could go from utterly calm to fiercely aggressive in seconds. But no one could blame her. Pinky came from a place with too many dogs and not enough care or love from people. She didn’t know how to trust people alone, never mind trusting them around her then-helpless, three-week-old pups.

During her first ten days in Dogtown, Pinky was so frightened that whenever her caregivers would come close enough to take a peek at the three precious pups. She would snarl and snap at them until they backed off. On the one hand, the behavior showed what a wonderfully protective mother she was, guarding her babies with all the strength she could muster from her little body.

Getting Pinky the Chihuahua to trust

However, caregivers like Analia Matias, known around Dogtown as “The Puppy Mom,” knew they would have to get Pinky. To trust them if only to ensure the puppies were healthy and growing the way they should. Because their mother was so agitated, the puppies were already showing signs of fear. They needed to learn socialization skills so they wouldn’t grow up to be afraid of people, too.

“Pinky was the toughest puppy mom I’ve ever worked with,” says Analia, who had to enter the Chihuahua’s room slowly and cautiously in the beginning. But once she realized that her caregivers were trying to help. And not hurt her and her babies. Pinky stopped getting so upset and began to let them come closer and closer.

Analia recalls one particular day when she could finally go in and pet the pups gently while whispering to the worried mother. After that, there was no more snarling or teeth-baring from Pinky. She was finally comfortable allowing people to tend to her and her puppies.

Dramatic changes for a little dog

That was a big step for Pinky, and her caregivers were thrilled. But, once her puppies were weaned and adopted into a new home. She started making even more dramatic changes now that she no longer had to protect them. First, Pinky went to school, participating in a shy dog class at the Sanctuary specifically for dogs 20 pounds and under. As well as a playgroup for small dogs.

As her circle of canine friends expanded, she started to win over more people and show that she could trust them. For example, even though she’d gotten used to petting. She would back away or bark whenever anyone tried to pick her up. She’ll roll over onto her side bashfully when someone reaches for her.

One of the biggest sweethearts

Pinky hasn’t completely lost all of her shyness. But the little dog has become one of the biggest sweethearts in Dogtown. “When she bonds with you, it is extraordinary,” says her current caregiver, Dara Merrifield. Pinky gets all wiggly when she sees people she likes, and she’ll even give them little kisses on their faces.

These days, she’s even paying it forward by helping other shy dogs settle in comfortably in Dogtown. That includes one of her roommates, Lyric, who spent the first two years of his life in a shelter. She’s showing him everything she’s learned in her few short months at the Sanctuary. Including that getting love, affection, and treats from people can be pretty sweet.