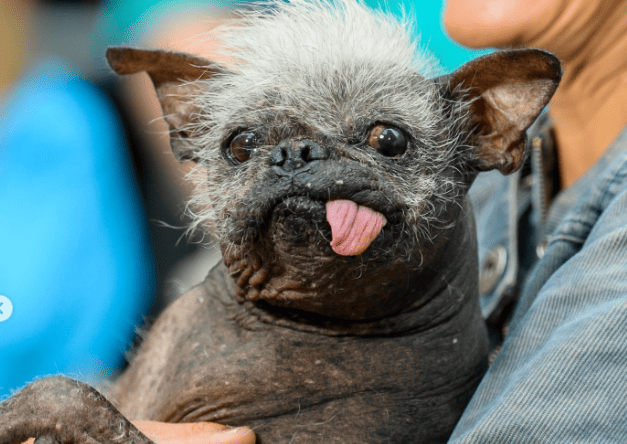 There is no contest like the World’s Ugliest Dog Contest, and thank goodness a winner has recently been named. After hours of deliberation, judges at the Petaluma, California contest called Mr. Happy, a Chinese crested-Chihuahua mix, their best in the show. Now his owner, Janeda Banelly, is speaking out about his victory.

Mr. Happy might not have the most familiar face out there. But when Banelly saw him at an Arizona shelter in August 2021, she knew she had found her pup. “I believe this humble soul is also an example, in subtle ways. Is it to help humans realize that even old dogs need love and a family too,” she explained to TODAY. Mr. Happy had a whole host of medical conditions. And when Banelly brought him home, she told her that he would only have a month to live. But that didn’t stop her.

“He was the happiest creature I had ever met,” she explained to the news outlet. “He hobbled up to me and chose me. I vowed that day. They would so love him that he would never remember how awful his previous life had been.”

The contest is meant to raise awareness about pet adoption and rescue. And the title of “Ugliest Dog” is intended to exemplify many dogs who aren’t given a chance because of their appearance.

“Since the ’70s, the Contest has been a testament that all dogs do not have to meet AKC pedigree standards to be man’s (or woman’s) best friend,” the website reads. “The owners of all dogs are also people, from youngsters to senior citizens. And each proud of their pet despite missing fur, crossed eyes, duck waddles, or mismatched ears.”

“The annual World’s Ugliest Dog® Contest is not about making fun of ‘ugly’ dogs, but having fun with some wonderful characters and showing the world that these dogs are wonderful!” it continues.