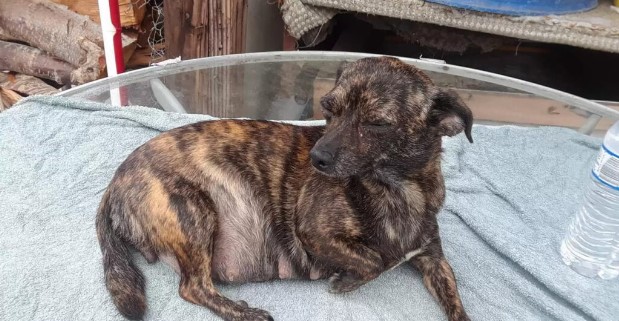 Bridgette, a little Chihuahua, was homeless, covered in fleas, wandering the streets of Los Angeles in the 100-degree heat, and was enormously pregnant.

“It was obvious to anyone who saw her that she was pregnant.”

“It was obvious to anyone that saw her that she was pregnant,” Linzi Glass, The Forgotten Dog Foundation executive director, told The Dodo. “She had a huge abdomen and was only a few days away from giving birth when we got her.”

Almost as soon as Bridgette got situated in a safe. Cool room at her foster family’s house, she gave birth to four tiny puppies.

And this happy ending very nearly didn’t happen at all.

A concerned resident had taken Bridgette in for a few days before The Forgotten Dog Foundation heard about her. Not only did Bridgette end up homeless again after the landlord of the building found out about the dog in the apartment. But Bridgette had also been given the wrong kind of flea bath. So when rescuers found her, she stank of chemicals from a soap meant to treat lice in human hair.

“Our vet office immediately bathed her multiple times and treated her for fleas with a product that is safe for pregnant moms,” Glass said. “Fortunately, no harm was done to the puppies from this, nor did it harm Bridgette.”

“Chihuahuas originated from the state of Chihuahua in Mexico and made their way across the border,” Glass explained. “There are many in California because many of them do not get spayed/neutered, like Bridgette.”

And now, she and her puppies will have a chance to know what a natural home feels like once they are ready to be adopted, probably in at least 12 weeks.

Bridgette is now nursing her babies in a comfortable bed and eating many meals herself to gain strength. “We are feeding her four times a day. A combination of wet high-calorie puppy food, chicken and rice, and puppy kibble,” Glass said.

Bridgette was wandering the streets of LA with no place to have her babies safely. The Forgotten Dog Foundation wrote on Facebook. “[But now] she is getting all the good food and care that she needs!”