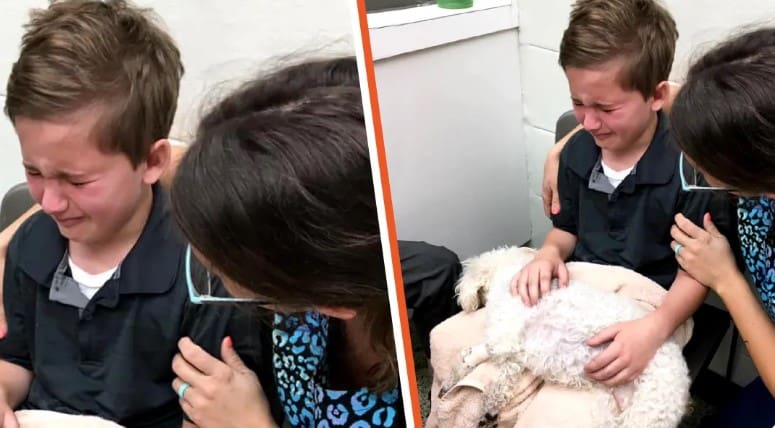 All pet owners want for their pets is the best. Even though it might result in them being hurt, they understand that what needs to be done must be done. This is the story of a son who had to hold his dying pup in their arms as she passed on.

Forming connections is quite a natural occurrence that happens almost daily. Some people form deep bonds with their fellow humans. Others develop a strong relationship with animals and eventually welcome them into their homes as pets.

Although people choose to live with pets for various reasons, the important role these animals play in their owners’ daily lives can not be overemphasized.

Sadly, sometimes, nature takes its course sooner than it should. And, many pet owners are left to deal with the loss of their pets more quickly than expected.

Some pets live for the maximum number of years and eventually die naturally. But, others are put down by their owners due to issues like underlying illnesses.

For the owners, seeing a pet go through so much pain and eventually making the tough decision to let them go is a very heartbreaking experience.

In 2020, a little boy named Robbie and his mother, Maria Henry Gay went through a heartwrenching moment. This was when they put down the former’s dog, Buffy. However, the little boy understood that it needed to be done. And, he had only wise words to say. Here are the details of the intriguing story.

Why Did Robbie Develop a Love for Senior Dogs

Growing up, Robbie had a tough life. He was frequently abused and, at some point, got hospitalized twice with brain injuries. Eventually, he was sent into the foster care system, and that was when Gay and her husband adopted the little boy.

Following his adoption, Robbie decided to extend the love he received from his adoptive parents to old and unwanted dogs from a local animal shelter by adopting them. Robbie confessed:

“There’s something about old dogs that I just like. Because people don’t want older people and older dogs. Then only want babies and puppies.”

The little boy continued his act of love and compassion. And, for the first time in a very long time, everything was going well for Robbie. However, Gay had only one problem with her son — he could not cry.

Robbie had gone through a lot in the past and developed a tough skin. But, it would take the death of one of his old dogs to bring the little boy to tears.

What it Took to Hold his Dying Pup

In a heartfelt Facebook post shared on February 6, 2020, Gay explained the circumstances surrounding their old dog, Buffy’s death. The woman told netizens that the dog was scheduled for a teeth cleaning and removal session with Vet Dr. Mac.

However, before putting Buffy under anesthesia, Gay explained that the doctor felt something was wrong and decided to look through some lab work. Sadly, after looking at the tests, the doctor confirmed the mother’s fears — their dog had an underlying illness. According to Gay:

“Buffy showed signs of advanced kidney failure, so anesthesia was not an option, and as a family, we decided that the kindest and most loving thing to do would be to let her go…”

After making the decision, the mother knew it was only right to let Robbie be a part of the tragic and unforgettable process. So, she picked up her son from school. And, on their way to the vet, Gay recalled Robbie saying he wanted Buffy to be in his arms when she went to heaven.

Immediately after they arrived, Gay granted her son’s wish. The photo accompanying the mother’s heartfelt message showed Robbie carrying Buffy on his lap while bawling his eyes out. It was indeed an emotional moment for the mother and child.

Robbie’s Thoughts After the Painful Moment

Gay confessed that after putting Buffy down, she and Robbie headed home. On their way, the mom made her son aware that she was proud of him for understanding the need to care for old animals and helping them live without suffering.

Robbie’s reply to his mother’s words would make Gay even prouder. The little boy said:

“I know how it feels not to be loved or cared for. And, I don’t want any animal of mine to ever feel that way. …Thank you for being proud of me. Are you OK, Mom?”

Gay did not expect such words from her son. But, hearing them made the mother know how much more Robbie understood about compassion. She further explained that the little boy understood how the foster care system worked and related it to old dogs.

“He is sadly aware that the longer a child remains in foster care, the less likely they will be adopted. He told me once, ‘if all you guys had wanted were a baby, you would never have gotten me.’ He relates to our ‘old people’ (that’s what we call our senior dogs) in much the same way,” Gay confessed.

The proud mother believes that Robbie has found a place to practice compassion in the older dogs. The little boy also desires to adopt older foster children in the future. But in the meantime, he is focused on adopting as many old dogs as his parents will allow.

Although Robbie will spend a short time with some of them, due to their age, the most important thing is getting to show them love and care. According to the little boy, all dogs deserve to be loved, and their well-being in the moment is what matters.