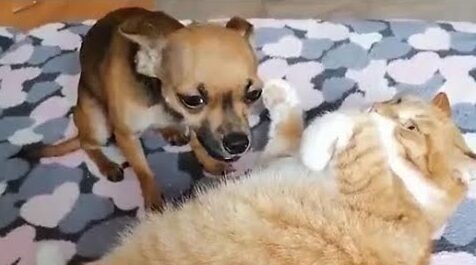 Watch: Jealous Dog Isn’t Too Happy About Cat Getting Attention

A jealous dog growls when his cat sibling gets all the attention.

Chihuahuas are famous for their grumpiness. And, this video explains why it’s probably true. The hilarious video features a chihuahua annoyed by his feline sibling getting all the attention. Filmed by Elena Shatrabaeva of Russia, the video shows her two pets – a cat and a chihuahua dog – sitting together on a bed. However, when Ms. Shatrabaeva began petting her ginger cat, it did not sit well with her jealous dog, who started growling and making “scary sounds.”

The 27-second clip, which has left thousands of dog-lovers amused, shows the dog looking startled by his owner’s blatant favoritism as she began stroking her cat. The tiny puppy cleared his displeasure. And, his owners filmed his growling every time Ms. Shatrabaeva tried approaching the feline. On the other hand, the cat seemed blissfully unconcerned by the chihuahua’s jealousy – throwing her paws up in the air as if asking for more belly rubs.

The video has been viewed thousands of times on YouTube. In the comments section, several viewers confessed that they were left in splits after watching the grumpy puppy, while others shared their experiences dealing with pet jealousy.

“Chihuahua is notorious for jealousy,” wrote one person in the comments section. “My chihuahua is like this,” another added.

Some tried to imagine what was going through the minds of the two animals as the incident played out. “Cat be like – she is just petting me from here,” wrote one viewer. “Looks more like he is protecting the cat. Still cute, though,” another theorized.