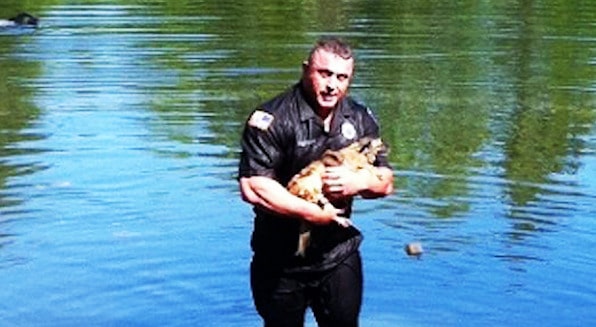 A Carver Police Officer is being hailed as a hero. He dove into the water to save a dog from drowning in a submerged truck.

Debra Titus, 59, was driving her pick-up truck on Saturday afternoon. And she accidentally went into the water at South Meadow village in Carver, Massachusetts. Her truck quickly sank underwater with her and her two dogs, Moochie and Stitch, inside.

Debra and Stitch managed to get free, but Moochie was still stuck inside when Officer David Harriman arrived.

The policeman quickly took off his gun belt and dove underwater to save Moochie. The water was very murky, but Officer Harriman managed to pry open the truck’s door and found Moochie in the back seat. He told the Boston Herald that Moochie was unconscious when he pulled Moochie to the surface, but when he gave the dog a “little squeeze,” the dog came to.

Moochie was shaken from his ordeal but otherwise in good health, according to police. Harriman gave Moochie to his relieved owner and went right back to work. He checked back with them an hour later to see how they were doing.

Officer Harriman is an avid dog lover and has an 8-month-old English Bulldog named Jax. He said a dog is like a family member, and he would hope someone would do the same for his dog, given the situation.

Way to go, Officer Harriman! You save the dog.

If you enjoyed this story, please LIKE Reshareworthy on Facebook and let us know, so we will publish more awesome stories like this in the future!

Share this good deed with your friends – everyone should know what this hero did!