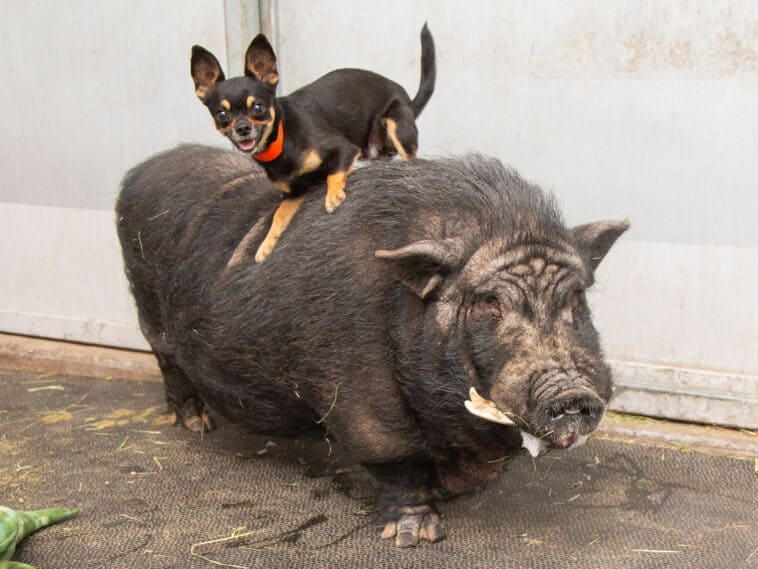 Two unexpected pals are sticking together!

Animal cruelty investigators from the Arizona Humane Society (AHS) rescued Timon and Pumbaa, a chihuahua and pig, respectively, earlier this month when their previous owner was arrested on charges unrelated to animal cruelty, according to a release from AHS.

Professionals don’t recommend that dogs and pigs live together. But, Timon and Pumbaa’s relationship is undoubtedly an exception.

“Immediately, AHS staff saw just how strong of a bond these two have, especially when Pumbaa is kind enough to allow Timon to hitch a ride on his back from time to time,” AHS shared in its release.

The Story of Chihuahua and Pig

Pumbaa needed medical care when he arrived at AHS. Arizona shelter could not provide, so AHS turned to the experts. The shelter contacted Better Piggies Rescue for help. Fortunately, Better Piggies had the resources to take in Pumbaa and Timon. So, the duo did not have to slip up.

According to May 23 post on the Better Piggies Rescue’s Facebook page, the pair of pals have found a permanent home. The rescue wrote that Pumbaa “made himself right at home in the front of the sanctuary” with the facility’s resident pigs. So, Better Piggers plans to make the animal a permanent ambassador.

“He’s a natural greeter, and I can’t wait for everyone to meet him when we start up tours in September,” Better Piggies Rescue shared on social media.

“Plus, he needs to be near his best friend, Timon, who we are working with to become a sanctuary dog,” the rescue added.

They established the Better Piggies Rescue in 2017 near Cave Creek, Arizona. Now, it is one of the only sanctuaries for pigs in Arizona, according to AHS’ release.