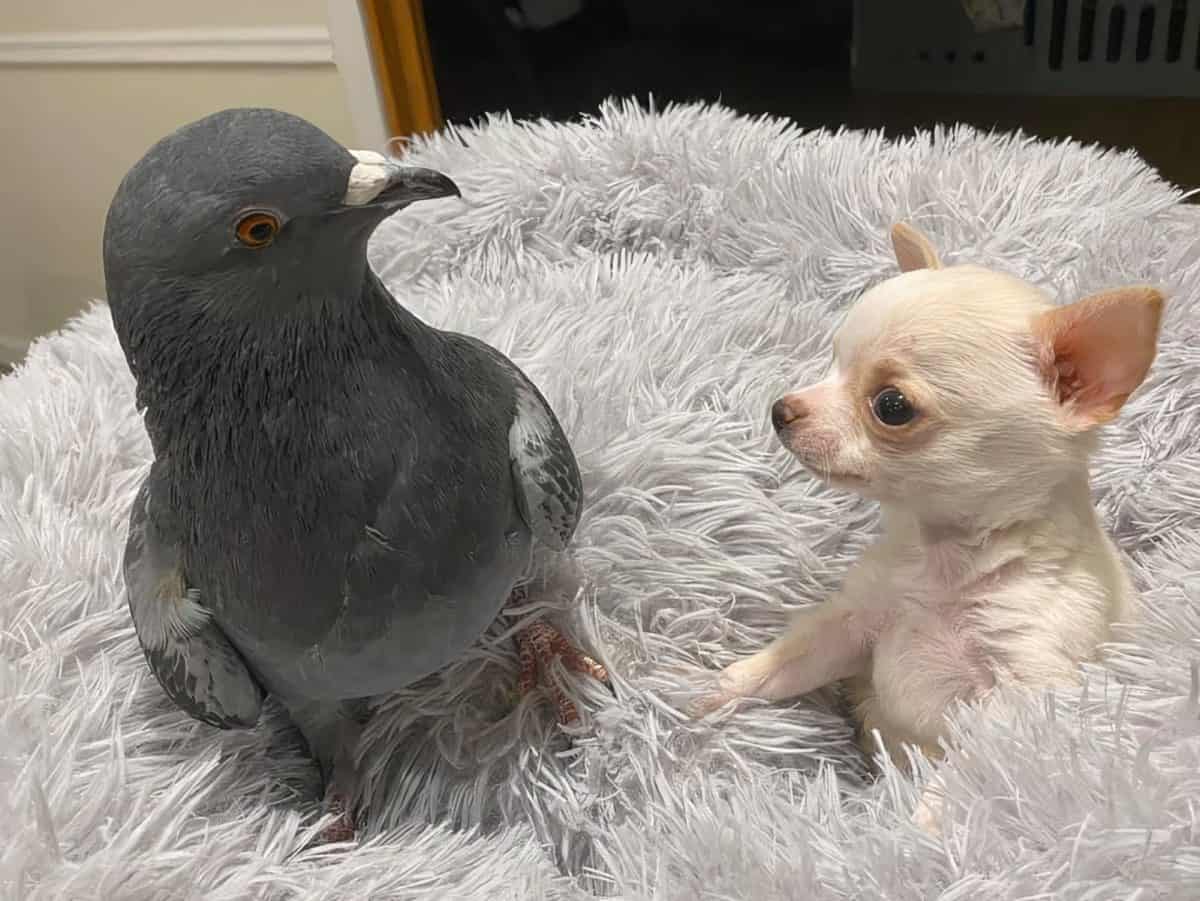 Chihuahua and Pigeon: Bringing Back the Unlikely Friendship of The Duo

For those of us who have been in the presence of adorable Chi’s, we know that you can achieve everything with the right amount of love. As a toy dog breed, Chihuahuas are very snuggly and friendly, as long as they feel your intentions are good. The latest proof of this comes to us from The Mia Foundation, a US-based organization fighting for animals with congenital disabilities. Using the “we all matter” matra, this foundation has found homes for several adorbs animals – including our very own Chihuahua.

Sometime last year, they posted a picture that restored our faith in humanity. Two of the cutest animals in the New York shelter have found an unlikely friendship that’s full of affection, snuggles, and co-dependency. The white-coated chihuahua named Lundy and parrot called Herman has repeatedly proven that true friendship goes beyond species. Even though they have their differences, these two angels have one thing in common: bodily dysfunctions that have made them stronger and fiercer.

What’s Wrong with Lundy and Herman?

Unfortunately, Lundy has experienced the poor misfortune of not being able to use his back legs. Still, that doesn’t stop the eight-week-old chihuahua from running around to play with his parrot buddy. While charming in all his might, Herman can’t fly due to a problem likely caused by a brain injury. The black and violet parrot doesn’t let that get in the way of jumping around in style, so he can get to his Chi friend whenever he’s bored. After all, you don’t always need wings to fly, right?

According to Sue Rogers, who runs the foundation, this unlikely friendship was completely born out of chance. As she explained to the WHEC, she randomly put Lundy down in a bed where Herman was residing peacefully. She told the news source that “they (Lundy and Herman) just looked really cute together, so I took some pictures and posted them to Facebook.” The foundation’s owner also said that people called her crazy for saving a pigeon, who she felt very strongly about. Talking about Herman and his crazy behavior, Sue said that she wanted him to live his life to the fullest since “his life has meaning too.”  And speaking about the mischievous chihuahua, “Lundy….well, who wouldn’t love that sweet little nugget?”

Where Are They Now?

Because people shared the pictures a million times over, the shelter got many donations in the following weeks. As of late last year, the foundation’s board told the press that they received over $6000 in contributions used to give the animals their much-needed surgeries. Sue and everyone involved is really grateful for all the downpour of emotions granted to them by the community. At last, these fragile animals will have better living conditions, and who knows – maybe a forever home too. If you want to learn more about Chihuahua’s unlikely friendships with other species, we suggest you check out our chihuahua & chicken article.