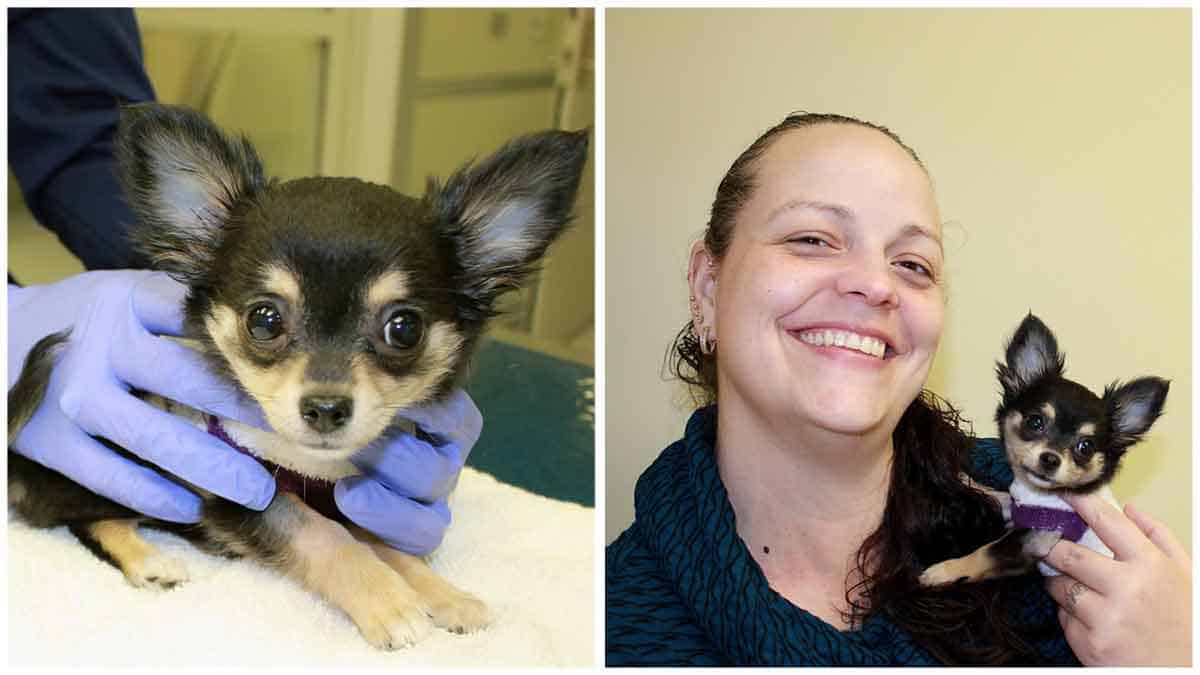 Small patients are nothing new for Auburn’s College of Veterinary Medicine. But a recent case is believed to be the smallest one to date to undergo Patent Ductus Arteriosus, or PDA, heart surgery. The owner and tiny dog flew a long way, more than 2,600 miles, to have the heart methodology surgery.

Weighing less than two pounds, Luna, a three-month-old, double-coated long-hair Chihuahua, came to Auburn as a referral patient from her Seattle-based primary care veterinarian. Luna’s owner, Jennifer Glover, says that as anxious as the process was, she is forever grateful to Auburn and to her Seattle veterinarian for saving her pet.

What is this Heart Surgery?

Patent Ductus Arteriosus is a fairly common congenital heart defect that occurs in about 3,000 newborns yearly in the U.S. and is also common among dogs. Clinicians and staff at Auburn’s Wilford and Kate Bailey Small Animal Teaching Hospital treat several PDA patients annually.

Luna, however, was a special case because of her size. At just 0.8 kg—or about 1.76 pounds—Luna was treated slightly differently to compensate for her size, said Dr. Harry Boothe, a veterinary surgeon and professor of soft tissue surgery in the Department of Clinical Sciences who led the surgery team. “Surgery in small, young patients is a challenge from both an anesthetic and a surgical perspective,” Dr. Boothe said.

“An additional dimension of Luna’s surgery was the fact that her thoracotomy necessitated placing her on a ventilator [breathing for her] during the surgical procedure. Specific challenges included minimizing hypothermia, avoiding hypoglycemia and gaining access to the heart and abnormal vasculature.

“The overall procedure for performing the surgery was essentially the same as any other Patent Ductus Arteriosus ligation surgery. The scale was just smaller.”

Luna was diagnosed in January. “I initially noticed that she had a persistent, hacking cough,” Glover said. “This was at nine-and-a-half weeks old, so I took her to our vet and he detected a heart murmur.”

When the puppy continued to exhibit signs of the illness, her veterinarian conducted an Echo test and, from that, determined that the tiny dog suffered from PDA.

Why is this Heart Surgery Required?

PDA occurs when a temporary blood vessel—the ductus arteriosus—fails to close after birth. In a normally functioning heart, the pulmonary artery carries blood to the lungs to collect oxygen. The oxygenated blood then travels through the aorta to the rest of the body. In the womb, the ductus arteriosus serves this function by providing oxygenated blood directly from the mother.

The arteriosus should close after birth. PDA occurs when it fails to do so. Symptoms vary in severity from mild to potentially fatal congestive heart failure. Sometimes it might even go undetected until maturity. Most often, however, surgery is required to correct it. In Luna’s case, Glover said the prognosis for a normal life span if left untreated was not good.

“I met with a veterinary cardiologist in Seattle, but because Luna is so small, he was reluctant to do the procedure,” Glover said. “We began researching for veterinary hospitals where this procedure had been performed successfully and often, and we found Auburn.”

Several telephone consultations were involved leading up to Luna being admitted for PDA surgery at Auburn. Glover brought Luna from Seattle and the pup was admitted to the Bailey Small Animal Teaching Hospital on Feb. 8.

Luna was extremely small even compared to case studies nationally, according to Dr. Boothe. Information cited in a large retrospective study of dogs with PDAs (more than 500 cases) published in 2014 listed their smallest patient being 1.8 kg and their youngest patient being 3.3 months. Luna weighed 0.8 kg and she was 2.8 months of age at the time of her surgery.

Glover stayed with her pet in Auburn for two weeks prior to the procedure and for Luna to receive a post-surgery examination and evaluation. Luna received a clean bill of health and was discharged Feb. 12.

“I am so pleased with the level of care that we received at Auburn,” Glover said. “Hayley and Dr. Boothe talked with me for a long time to ease my anxiety about Luna and the surgery. I was very nervous, but they calmed me. They even gave me their contact phone numbers and sent photos of Luna. That helped keep my stress level down.”

Luna’s medical team recommended that Luna be evaluated by her primary veterinarian in six months, but added that the tiny Chihuahua should recover completely from the condition and live a normal, healthy life.