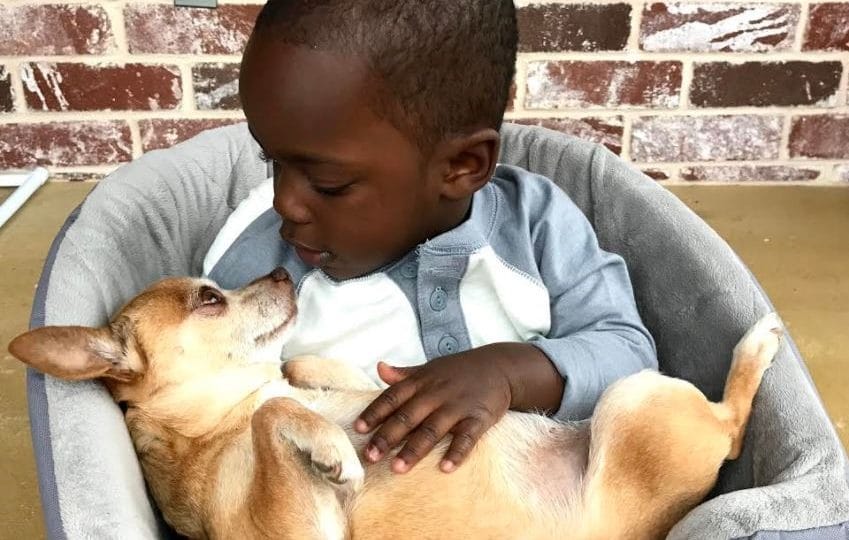 Chihuahua Wins Over Fearful Boy and the Internet Falls in Love

“What if he doesn’t like dogs or is allergic to cats?” friends asked Holly Brookhouser about Marcelo, the little fearful boy who she and her husband Chris were adopting from the Democratic Republic of the Congo in Central Africa.

The Brookhouser home was filled with rescues: dogs, cats, a rabbit, and a hedgehog. “We were warned during the pre-adoption process and training that some of the triggers can be pets, so I knew going into it that it would be something to be on guard about and be ready for,” Brookhouser said. 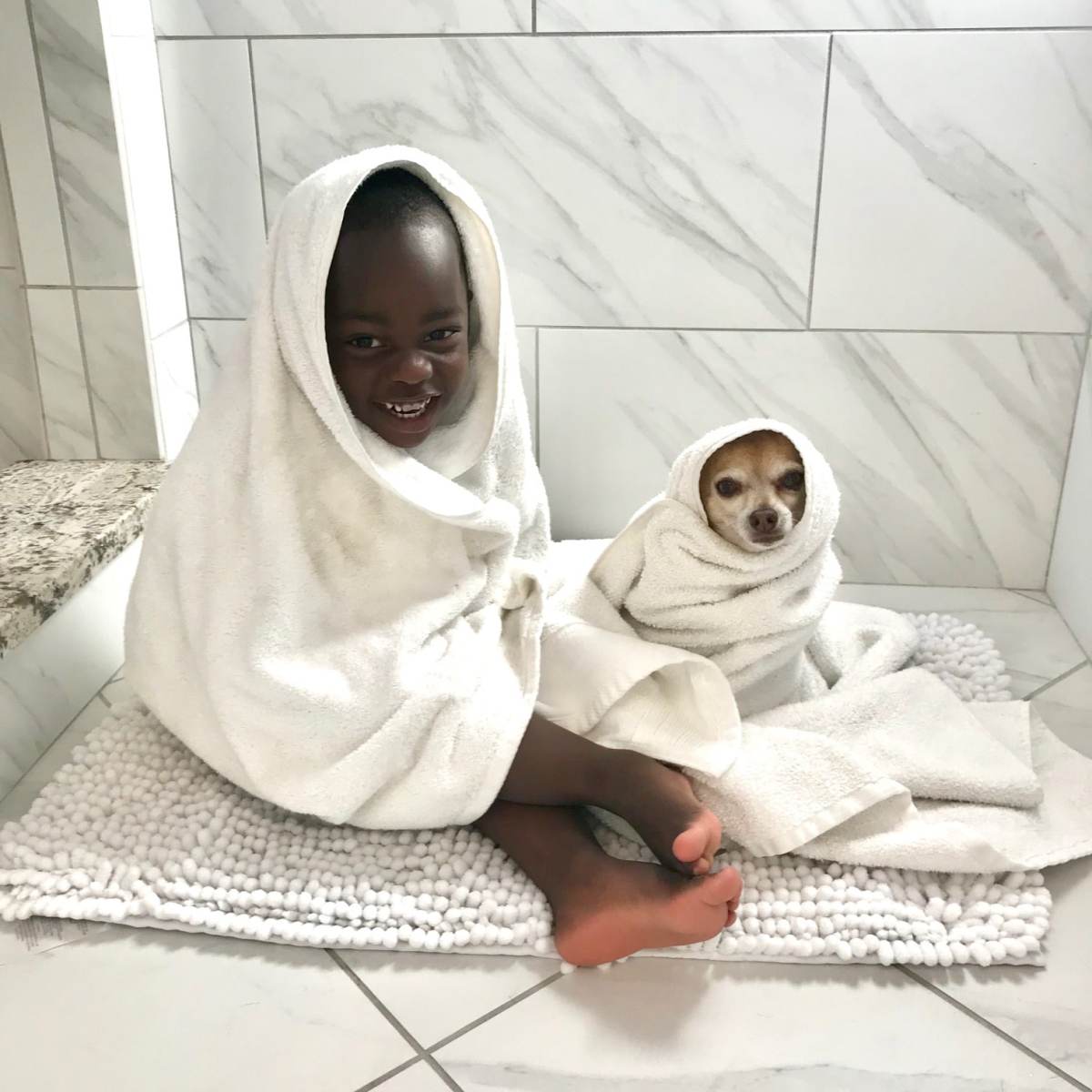 She stayed positive and thought things would be fine, especially since a video of Marcelo and his foster mom featured a dog in the background. “But once the fearful boy got here and my dogs ran to greet him, he screamed bloody murder,” Brookhouser, who chronicles the adventures of her pack as PawsofOz on Instagram and Facebook, said.

Marcelo was only two years old when he arrived in his new home in Centerton, Arkansas, in 2018. He was terrified having left all that he knew to come to an unfamiliar place with totally new surroundings, plus he only spoke French and Lingala, his native languages.

Thankfully, Chris had studied French in college so he was able to help Marcelo understand things during the first few days. However, Marcelo, the fearful boy, had some outbursts where he would yell at his new family in Lingala. 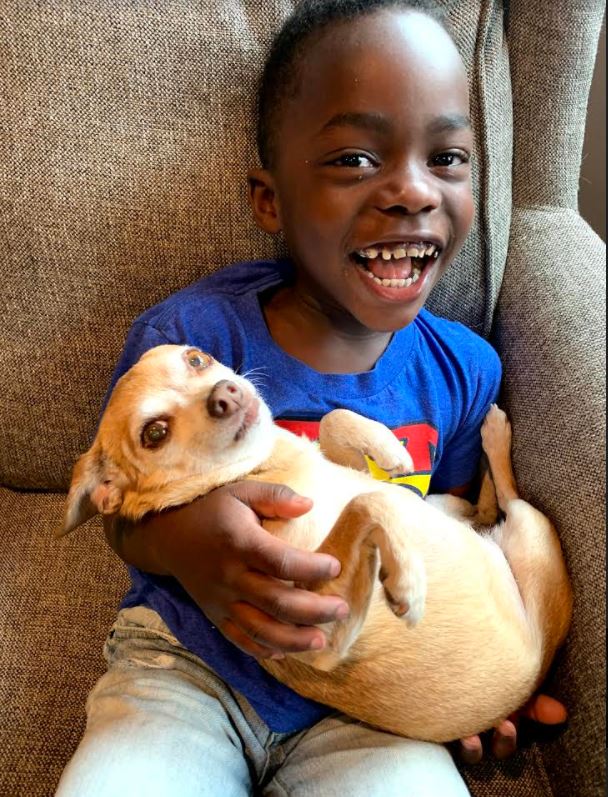 To top it off, he was petrified of the dogs.

Initially, Marcelo didn’t want the dogs around him. That included Mini, a 10-pound senior Chihuahua mix, and Davey, a 20-pound senior terrier mix. If the dogs were on the couch with Marcelo, he would move away or try to swipe at them without making contact.

“I still wasn’t fazed because I know Mini,” Brookhouser said, knowing Mini’s good natured and docile temperament. She kept Davey, on the other hand, who is sometimes temperamental with children, further away from Marcelo. “But Mini is such a kid lover that I knew she would break through to him.”

The New Normal With Dogs

The family then went into cocooning, including Macy, the Brookhouser’s teenage daughter. They spent all day on the patio and engaged in play with the dogs running around so that Marcelo would get used to the new normal. “My husband would try to get him to understand in French what was happening and then in English just explaining things,” Brookhouser said.

By being in a relaxed atmosphere and hanging out with family who interacted with the dogs, fearful Marcelo saw that he could trust everyone and was able to let down his guard.

After about two weeks, the family was on the patio and Marcelo slowly tried to pet the cats. But, the cats were a little cautious around him. Mini was there as well. “I asked Marcelo, ‘Do you want to hold Mini?’” Brookhouser said. “And he said, ‘Oui.’” 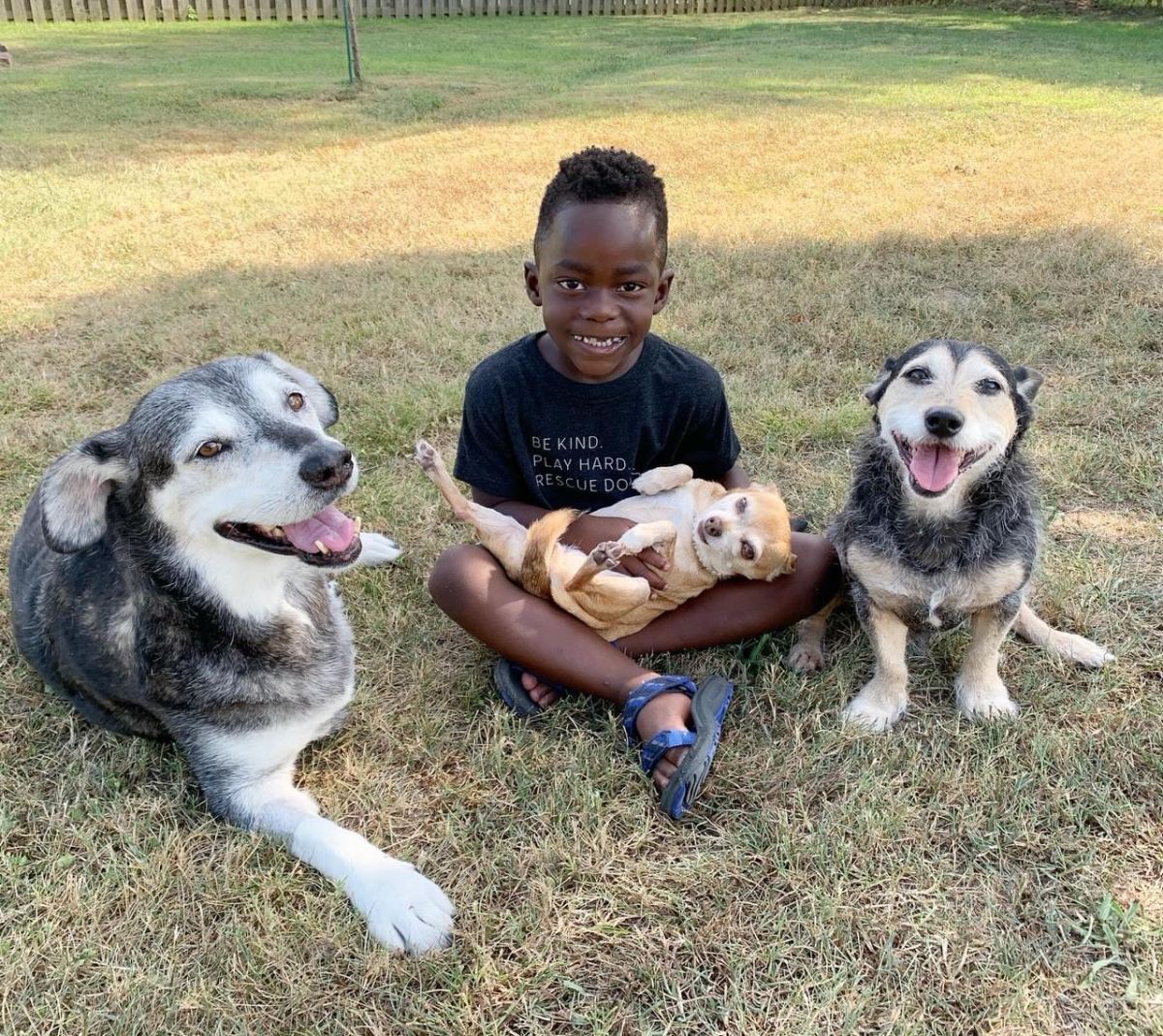 Brookhouser sat Marcelo down and handed Mini to him. “That just sparked the love fest,” she said. “He realized that it was really cool to be able to hold and pet her. When I went to take her away at one point, he told me, ‘No.’ He was telling me it’s his dog.”

Although Brookhouser wasn’t surprised, she could breathe a sigh of relief.

A Lifetime of Pets

A big animal lover since birth, Brookhouser had parents who loved cats and took in strays. “I had a Siamese cat attached to me from the day I was born who slept with me in the crib,” she said. “We always had dogs and cats. I’ve never been without them.”

Brookhouser obviously got the rescue gene from her parents, adopting her first cat when she moved out on her own. When she met Chris, he had a family cat and they bought a dog together. When Brookhouser later found out the dog came from a puppy mill, she promised never to buy another pet and made it her mission to get involved with rescue work. 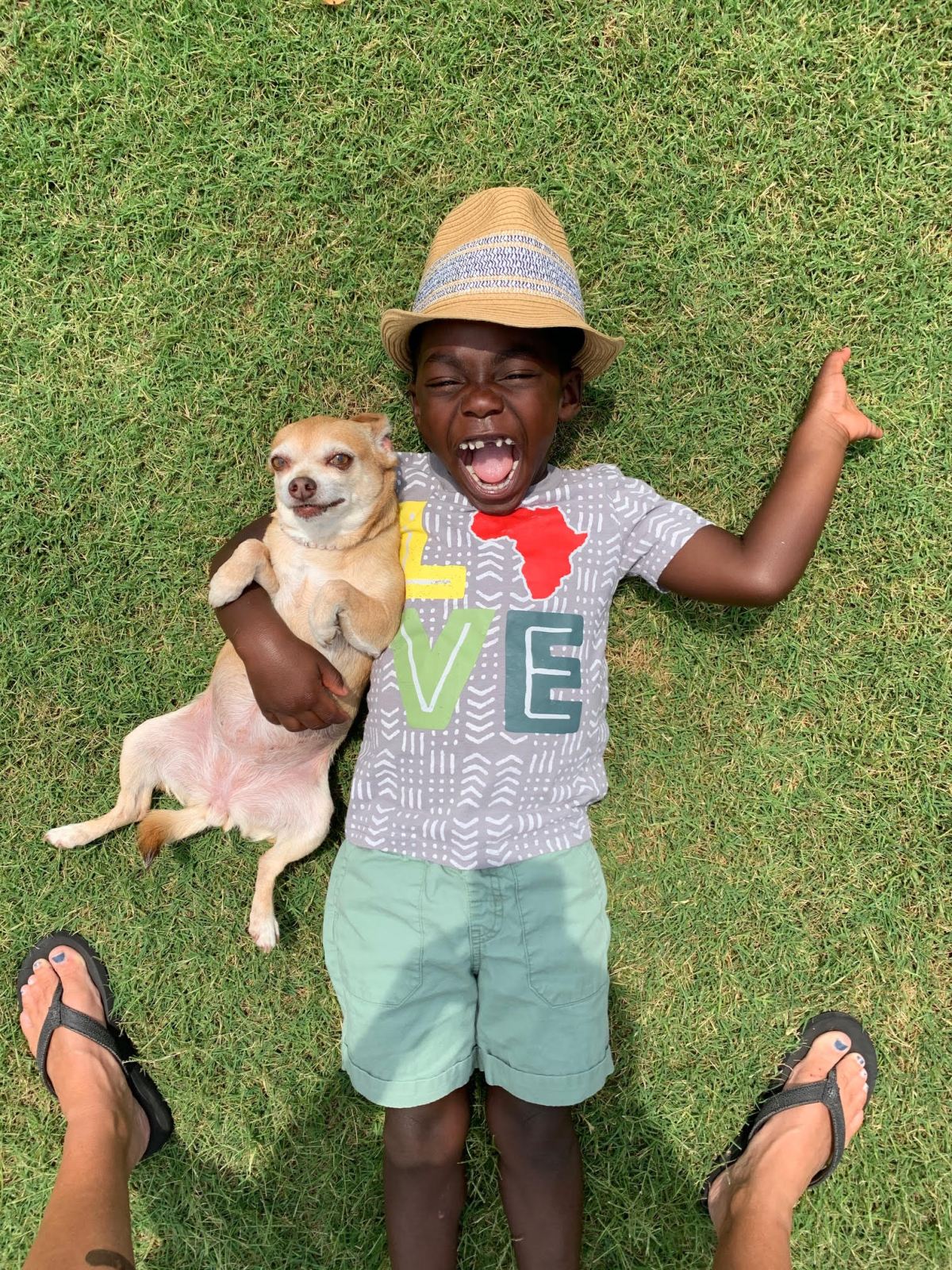 The couple moved a handful of times due to Chris’ job. While living in Wichita, Kansas, in 2010,  Brookhouser started to volunteer at a no-kill shelter while Macy was in kindergarten. She worked with the medium-size dogs in the back area where she cleaned, fed, and watered the dogs.

Along Came Davey and Mini

Brookhouser wanted to adopt an overlooked, big older dog. Things changed when she was assigned to care for Davey, who was 1-year-old at the time. Originally on the euthanasia list at the city pound, Davey was saved by the no-kill shelter. Davey eventually wore down Brookhouser and she adopted him.

That following summer, fearful Macy accompanied Brookhouser to volunteer. One day, after Brookhouser finished cleaning at the shelter, Macy wanted to look at the little dogs. 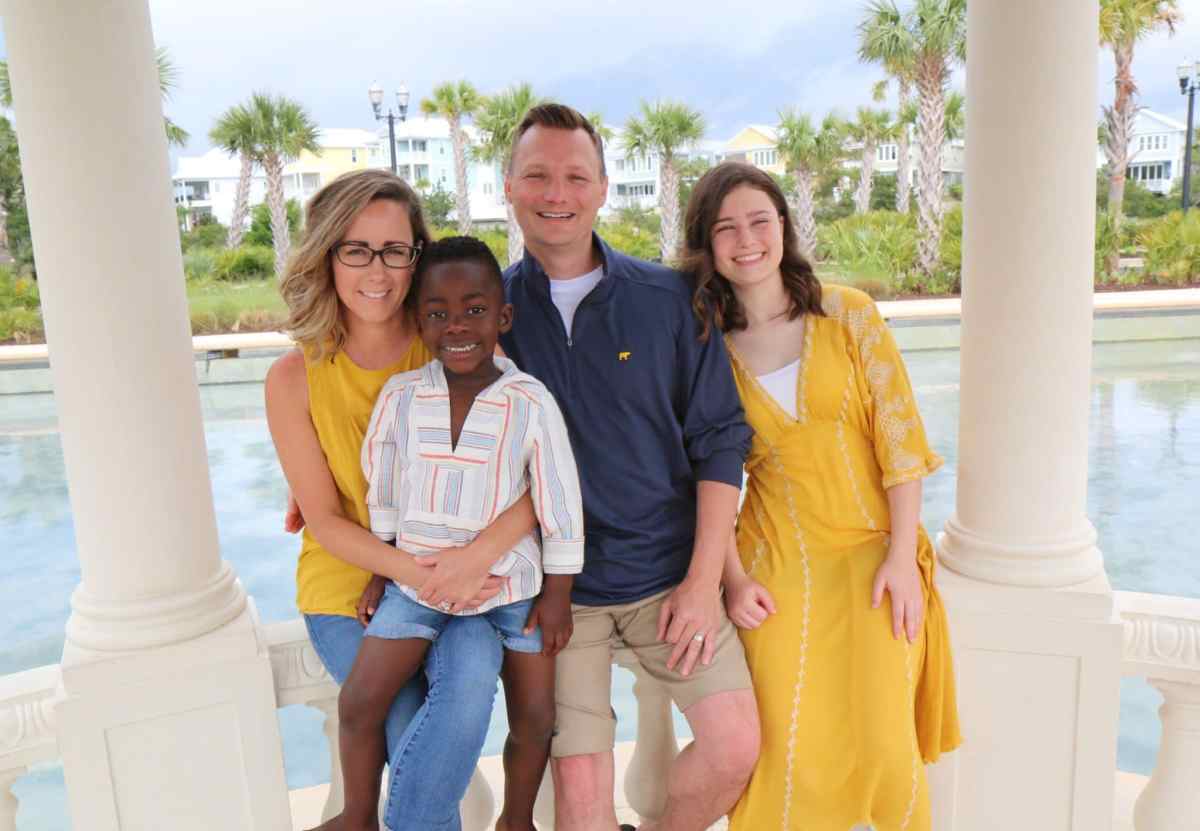 “That’s when we saw Mini,” Brookhouser said. “She just clicked with Macy.” Mini had been relinquished at the city pound by her owners who had lost their jobs. Thankfully she ended up at the no-kill shelter.

They started taking the 4-year-old dog to adoption events. “Macy would hold her and while I talked to people about other dogs I was showing, people would try to look at Mini. But Mini didn’t want to have anything to do with anyone else. People would tell me they were interested in the Chihuahua but that the little girl holding her said she’s not for adoption.”

Brookhouser knew she was fighting an uphill battle. Even though she didn’t think she wanted a Chihuahua, “Macy was undermining my efforts,” she said. 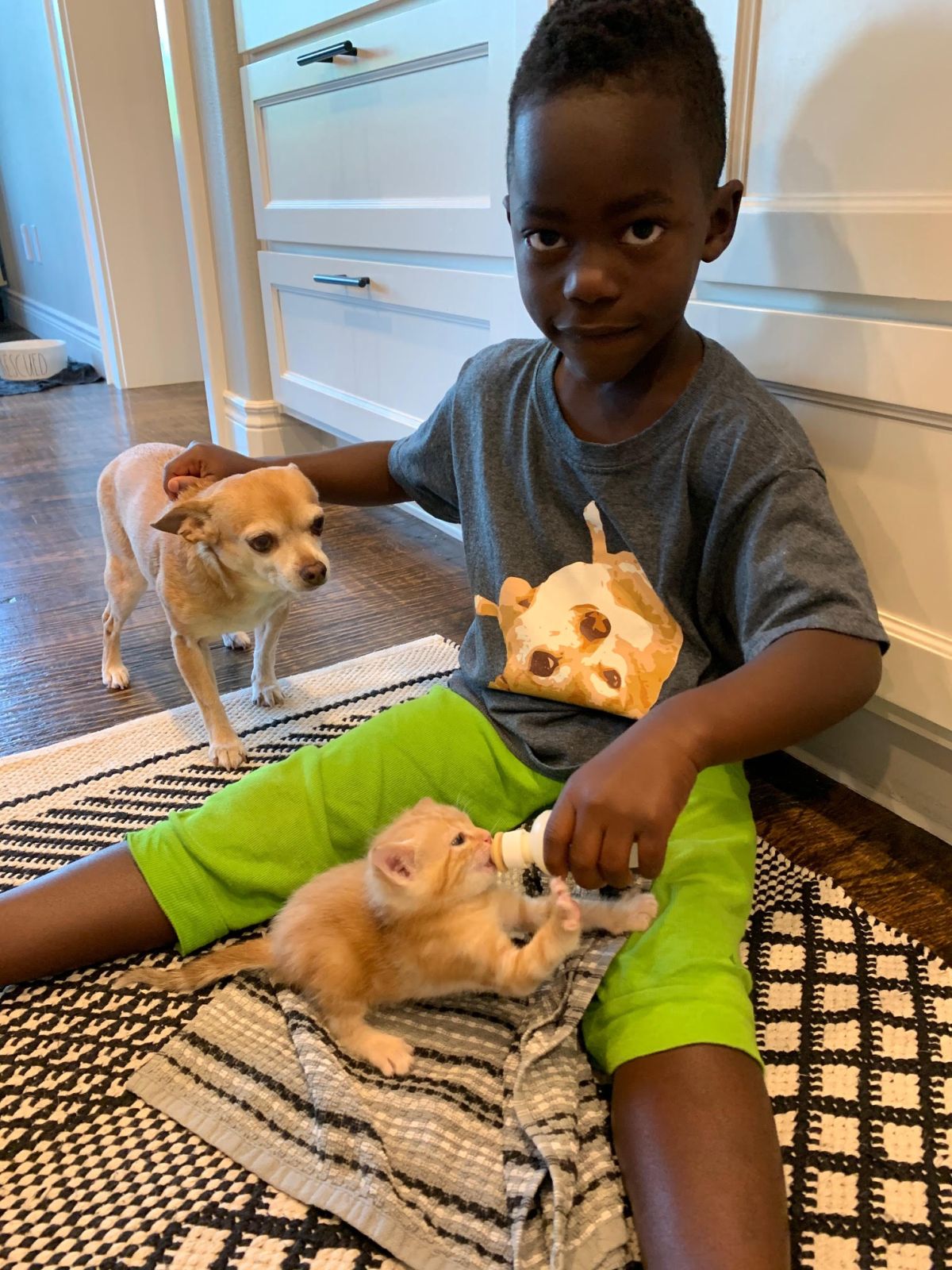 For her birthday that August, Brookhouser told Chris she wanted him to help her clean at the shelter. She knew he wouldn’t say no because it was her birthday. That’s when she introduced him to Mini.

“He fell in love with Mini,” Brookhouser said. “But I put her back in her cage. When we got to the car he said, ‘Are we not bringing home Mini today?’” So, they brought her home and surprised Macy when they picked her up from school.

A Boy and His Dog

Brookhouser had previous impressions of Chihuahuas that just didn’t fit Mini’s personality. So, when fearful Marcelo came into the picture, Mini was the perfect one to change his mind about dogs. Mini made her presence known but wasn’t pushy. “She slowly worked her way into his little circle,” Brookhouser said. “I think she realized she needed to be more patient and allow him some space.

It helped fearful Marcelo to see that Mini was relaxed and not crazy. “She would approach him and roll over on her back and show him her stomach,” Brookhouser said. “She followed him everywhere.”

After that first time he held Mini, Marcelo became brave and overcame his fear. “It boosted his little ego,” Brookhouser said. “They became inseparable. Mini was happy to have another little human again.”

Mini has definitely taught Marcelo to be gentle and kind with animals. And, Marcelo has lots of animals other than his own so he can practice. Brookhouser continues to foster animals through Best Friends Animal Society, and after speaking with her, we found she actually dog sits for Rover, too!

The friendship between Marcelo and Mini is more than special. “It shows that rescue dogs are worthy of love and a second chance, and that they can help break through fears and stereotypes,” Brookhouser said. “All they know is love and forgiveness and help teach us compassion and empathy.”

And what does Marcello have to say about it all? “Mini rides in the car with me and she plays with me in the backyard,” he said. After all, that’s what best friends are for. 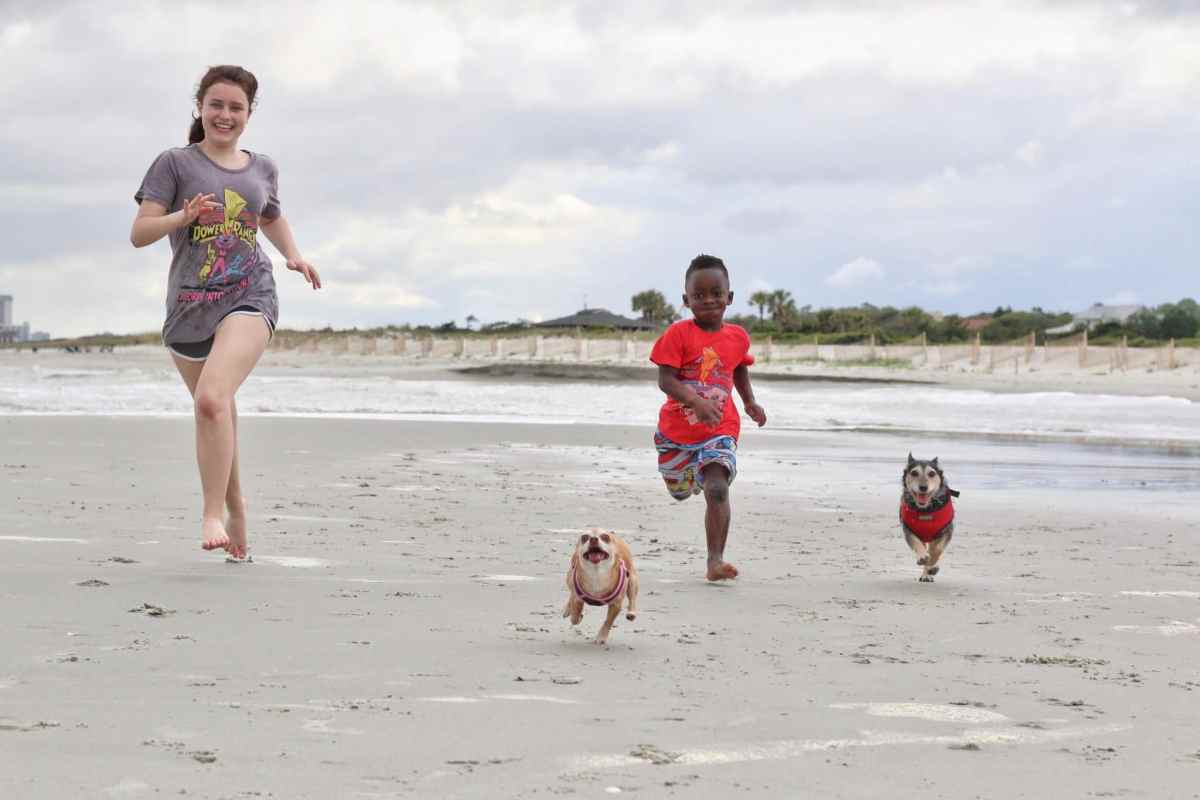