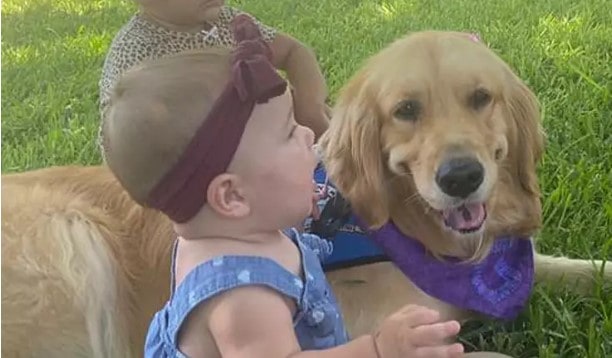 Eight golden retrievers support survivors after a gunman opened fire at an elementary school in Uvalde, Texas. The school shooting traumatized the poor kids, but the sweet pups were there to make it all better.

After tragedy struck on Wednesday in Uvalde, Texas, where 21 people were killed in a mass shooting at Robb Elementary School, several comfort dogs were sent to the area to support survivors and first responders.

On Wednesday, the Lutheran Church Charities (LCC) K-9 Ministries — known for its nationwide dedication to providing canine comfort and support to those impacted by disasters — sent eight golden retrievers to respond to the mass shooting.

How Support Dogs Can Help with a School Shooting

“We just see a lot of shocks, crying, [people who are] distraught, especially coming in the day after a mass shooting,” Bonnie Fear, LCCs’ K-9 crisis response coordinator, told Good Morning America. “People are not ready to process or listen or answer questions. So we just show up with the dogs.”

“We listen if they talk,” she added. “We’re silent. We let the dogs connect with people, and they can express their feelings at that time, and we’re not counselors, so we are just present, standing with them in their sorrow.”

Fear told the outlet that LCC plans to have the dogs attend the mass vigil in Uvalde and visit the community’s civic center, where they can connect with school staff and students, first responders, and families of the victims and survivors.

The organization has also provided canine support for past mass shootings, including the 2012 shooting at Sandy Hook Elementary in Newtown, Connecticut, which left 20 first-graders and six educators dead.

Tim Hetzner, LCC president and CEO, recalled the positive impact the program has had in the past.

“I remember one situation in Sandy Hook, four days after the shooting,” Hetzner told GMA. “We were at a community center, and this couple was there with their young boy. … I had a dog named Howe at that time.”

A Brighter Future for All

“Howe looked up at the boy, got up, and walked over to the boy. He then rolled into his legs, and the boy came down on top of him,” he continued. “They just laid there. After about 10 minutes, the boy lifted Howe’s ear and told him everything that had happened in that classroom. Parents started crying because it was the first time the boy had talked in four days. First time and it was a dog.”

According to Hetzner, the charity’s K-9 unit has expanded. From four dogs in 2008, they now have more than 130 dogs across 27 states. Animal lovers can help these comfort dogs with important work by donating to LCC. This allows the group to cover the canines’ travel expenses.