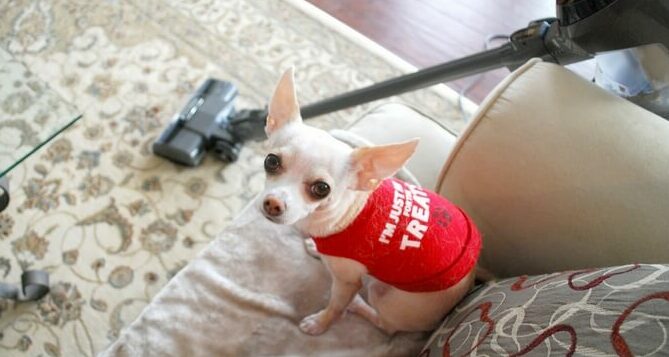 Dealing With Fearfulness in a Chihuahua

According to Chihuahua rescues, fearfulness is the number-one behavior problem they see with dogs coming into recovery. The level of a dog’s fear can range from pronounced cautiousness to such terror that it causes the release of its bladder and bowels.

Fearful Chihuahuas are also the number-one cause of dog bites. Most people incorrectly assume that most dog bites are not the result of a confrontation with an aggressive, dominant dog. Fear-biting occurs when a frightened dog is put in a situation where she feels she is confronted with life. Threatening danger and has nowhere to escape.

This could happen in an innocuous situation. As Chi sees it, she has no escape (the leash and her owner are holding her). And she is facing life. Threatening danger(the little girl).

Signs of fearfulness include a tucked-under tail. E ars flattened against the neck, slight crouching, shaking, hiding behind the owner, and attempts to run away. In extreme cases, a dog may urinate, defecate, or bite in self-defense.

Fear can originate in Chi’s genetics and be exacerbated by her upbringing (her experiences or lack thereof with people and dogs).

In a Chihuahua with the genetics to be a very outgoing dog, fearfulness can stem from abuse, neglect, and lack of socialization.

So, if you own a Chi puppy, you have a tremendous influence on the outcome of her temperament, whether she is genetically predisposed to be fearful or not.

If you own a rescued Chihuahua that is fearful, she is not a lost cause! You can do a lot to help your Chi overcome many if not most of her fears. For both pups and adults, how to pull a shy dog out of her shell(or to prevent a puppy from becoming shy). It is through socialization.

Chihuahuas do have to worry about predators. Hawks, owls, and other large birds of prey can quickly swoop down and carry off a puppy or adult Chi. Perhaps due to the breed’s early ancestry and the necessity for self-preservation, the Chihuahua has a unique reaction to specific sudden overhead movements.

Pancaking, as Chi owners call it, is when a Chihuahua flattens herself on the ground. A large shadow passing overhead or the slightest sound in the trees can trigger this defensive reaction. If a Chihuahua pancakes from time to time, it does not mean she is timid, shy, or fearful; this is a natural reaction.

Suppose you find your Chihuahua pancakes frequently for non-threatening movements (the ceiling fan) or sounds (a jet overhead). In that case, you can help her recognize these things are not dangerous through one of the following training techniques:

Do Not Comfort Your Chi

The one thing you do not want to do is scoop up your Chihuahua in your arms and comfort her – no matter how badly her pancaking pulls on your heartstrings.

Comforting a dog when frightened will only make her reaction worse the next time. Why? Because your Chi sees your hugging and cooing as a reward for her behavior, thus reinforcing the exact behavior you want to eliminate.

Suppose you are dealing with a young Chihuahua puppy already showing signs of being genuinely fearful of strangers and not the least curious about people, even within a reasonable comfort zone. In this case, your Chihuahua probably has the genetics to be fearful.

Even if you have adopted a timid adult Chihuahua, there is no natural way to know if your Chihuahua’s fear is inherited or shaped by its environment.

Whether working with a naturally shy or well-socialized puppy or dog, your approach to socialization will be the same. With the fearful Chi, it will take more dedication to continue working with your Chihuahua.

What Is a Timid or Shy Dog?

Though the Chihuahua is loving, devoted, and playful at times with those she knows well, this is not a breed that, by nature, is an outgoing, gregarious creature with strangers. She is much more likely to want to watch anyone unfamiliar from a distance and make her approach on her own terms when she feels comfortable.

With a breed that tends to be a little wary, it is essential to work on socializing your Chihuahua.

A puppy or adult dog not exposed to many friendly people will only become more and more reclusive. Even a well-adjusted Chi that was well socialized as a puppy can become increasingly suspicious of people if an effort is not made to introduce her to friendly strangers throughout her life continually.

Socialization Is the Key

Also, as a Chihuahua owner, you need to understand that socialization is not a one-size-fits-all deal. It is a process that begins when a puppy is adopted and continues throughout the dog’s life.

The well-socialized and friendly Chihuahua will also warm up quickly to strangers. So, they should allow themselves to be petted and offered treats by lovely people. She should not quiver, tremble, shake or bark, snap, or charge aggressively at people.

So given that the Chihuahua is a breed that is prone to be standoffish initially with strangers, how can you tell if your Chi is genuinely a timid dog by nature or whether she has not had enough socialization?