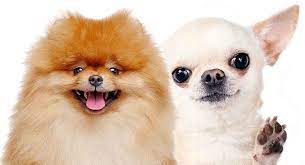 Do Pomeranians And Chihuahuas Get Along?

If you’re wondering if Pomeranians and Chihuahuas get along, you’ve come to the right place.

Do Pomeranians and Chihuahuas get along?

Pomeranians and Chihuahuas can be taught to get along. You have to put in the work at the beginning to make sure the two dogs get used to each other. It’s gonna take some time, patience and a lot of barking at first.

It’s important to consider the age and energy levels of both dogs. That can prevent unnecessary interactions between the two.

For example, an older dog won’t have the same interest in playing as a puppy would.

To make it even easier for them to accept each other without excessive barking, you can get one of each sex. This is likely to prevent dominance-related issues.

How did Pomeranians and Chihuahuas come to be

Originally, Pomeranians were working dogs pulling sleds in Iceland and Lapland. To get an even better idea of the Spitz Family they come from, think about the Samoyed, Akita and Alaskan Malamute.

Queen Victoria of England loved Pomeranian but wanted to have a smaller one. In the mid-1800s she brought one like that in England.

This led to smaller Pomeranians becoming more trendy and eventually left us with the breed as we know it today.

Chihuahuas come from a warmer region which can also be recognized by their fur. Unlike the long, fluffy jacket of the Pomeranian, their fur is very short.

Chihuahuas are believed to be descendants of the Techichi – small hunting dogs that are now extinct, used by the Mexico Toltec civilization in the past.

Chihuahuas became companion dogs in the 1960s because they could be kept in apartments.

Both dog breeds are similar in size.

Although Pomeranians are slightly taller and appear bigger because of their coat, it’s significantly easier to get along with Chis because no dog is intimidated by the size of the other.

Small dogs like Pomeranians and Chihuahuas often feel the need to appear bigger and scarier when they see a bigger dog. That’s when you can experience excessive barking.

Since you’re interested in both of the breeds, it’d be great if you get to know all about their character traits.

Pomeranians love to be the center of attention. They’re bold and communicative. They make excellent watchdogs which have to do with their ancestry. They’re confident and brave. They’re friendly but don’t get along with children.

Some negative traits that could be caused due to poor socialization an early age are:

Although Pomeranians are slightly taller and appear bigger because of their coat, it’s significantly easier to get along with Chis because no dog is intimidated by the size of the other.

Small dogs like Pomeranians and Chihuahuas often feel the need to appear bigger and scarier when they see a bigger dog. That’s when you can experience excessive barking.

Exercise is always a good idea – for both dogs and people! If you have several games in mind, that your dog truly loves, it’s time to put them into action.

Tiring out your dogs by playing with them will direct their attention towards something fun and engaging. After at least an hour’s playtime, your dogs will feel more relaxed and less likely to make a mess in the house or pick a fight with each other.

Although Pomeranians are tiny they have bursting energy. They do not have that much endurance because of their size.

2-3 walks a day plus active playtime should be just enough exercise to keep your Pomeranian stimulated and happy.

Chihuahuas are even less energetic and running around their home could do wonders for them. To stimulate and socialize them properly, you’ll need to provide them with time outside to sniff and explore.

Consider mental exercise as well. Some dog toy puzzles can keep your Pomeranian and Chihuahua busy while you’re doing something at home or simply are away.

Since both breeds are companion toy dogs, it wouldn’t be smart leaving them alone without anything to do while you’re gone.

If one of the dogs is the dominant type and the other one the submissive, they are gonna be fine. If both are dominant, then there are gonna be issues.

One way to get an idea of how they will get along is to get them together outside. That way the meeting will not be on one of the dog’s territories. Both dogs should be leashed.

When at home, don’t forget your first dog and continue paying the same amount of attention to them, just as before. This is bound to prevent arising jealousy.

What you could also try, is giving food to your current dog first.

Make sure you feed both dogs in different places to avoid one dog snapping at the other. There’s nothing like food to provoke the dog’s instincts of territorial protection. By keeping the two dogs apart while feeding, you will prevent potential conflict.

How to introduce the two adult dogs to each other?

You can try the following technique: secure a crate for each dog. Lure the dogs in the crates with a treat. Then, position the crates facing each other.

That will keep the dogs from attacking each other. Leave the like that for about 10-15 minutes. Be prepared for a lot of barking!

Repeat each day and increase the amount of time they spend together. At some point you would be able to leave the Pom and the Chi together without issues.

Note: When you have a newcomer dog, keep the two dogs in separate rooms first. They will need time to adjust to each other’s smell.

Socializing a Chihuahua and a Pomeranian puppy

It’ll be best to take two puppies, as puppies are prone to be curious and adaptable. So, the more they socialize from the beginning of their life, the better.

This is crucial for how well they will get along with other types of dogs throughout their life later on.

If a puppy is not socialized properly from early puppyhood, this can cause behavioral problems not only with other dogs but with humans as well.

Remember that when you get a puppy, your home is a new environment to them. It’s important to make the puppy feel welcome.

You can do this by petting and stroking the puppy.

Basically, by showing them affection. Have a crate or a puppy bed in a room where the puppy feels safe. This will be a safe haven.

If you introduce a new puppy shortly after your first puppy has settled in the house, make sure you give enough space and time for adjustment to both of them.

Although puppies are curious, some of them could react very strongly to an unfamiliar situation. This could lead to squeaking, running, barking, and hiding.

Pomeranians and Chihuahuas are intelligent but could act bossy and stubborn. This could cause trouble for the owner during the housebreaking period.

To avoid frequent messes around the house such as chewed cables, pieces of furniture on the floor and so on, it’s essential to stimulate the brain of your dogs.

Both breeds are quick to learn commands, especially when you give them plenty of positive reinforcement. Have a treat in your hand while repeating a word you want your dogs to obey.

Some basic obedience commands can save you a lot of nerves in the future. That is when you want your dog to stay beside you instead of running off with other dogs.

Or when you want to stop excessive barking that would eventually lead to a bad relationship with your neighbors.

Luckily, if you start training your dogs in the early stages of their lives, all of this could be prevented. Then you’ll have two cute-looking dogs that also act cute. At least most of the time.