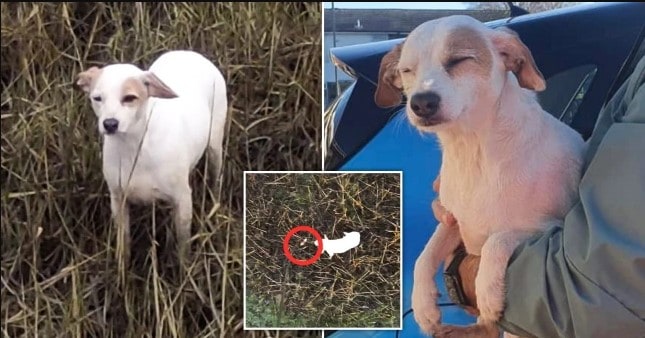 Pup Rescued from Drowning with a Sausage Drone

The Jack Russell terrier was in danger of being overwhelmed by rising tides when she was found stranded on mudflats in Havant. Millie went missing after slipping her lead and was on the run for four days. But, she was rescued in a very unlikely manner.

She was lured to safety by a sausage attached to a drone by a piece of string.

The Jack Russell terrier, called Millie, went missing after coming loose from her lead in Havant, The Guardian reported.

She was found stranded on mudflats near Portsmouth, with rising tides threatening to sweep her out to sea. This prompted a rescue effort to swing into action.

Police, firefighters, and coastguards tried tirelessly for four days to rescue her. But, they were left scratching their heads when even kayaking to her wouldn’t work.

The chances of Millie being reunited with her owner seemed increasingly unlikely when a rescuer had the idea of attaching a sausage to a drone. This was with the hope of tempting her to be rescued safely.

The chair of the Denmead Drone Search and Rescue team, Chris Taylor, told The Guardian: “It was a crazy idea.

“One of the local residents on the beach where we were flying from supplied us with the sausages. I think they were from Aldi. The woman cooked them up for us and we attached them with string.”

Luckily, the pork-dangling plan worked. The terrier followed the sausage towards her rescuers, away from the rising tides.

“If we hadn’t… got her away from that area the tide would have come in. And, she would have been at risk of drowning,” said Mr. Taylor.

“It was something we had never tried before. The sausages were the last resort.”

Mr. Taylor said it was a rescue method teams facing the same challenge in the future might want to try.

He said: “We certainly would consider using sausages again. Every dog and search operation is always going to be different. But, if we were ever in a similar situation again we would employ the same methods to lure the dog.”

Ran Away a Second Time

The maximum take-off weight of the drone had to be checked before attaching the sausage to it to make sure it would fly.

Once on higher ground, Millie ran away a second time. This left her owner Emma Oakes worried once again for her safety.

The pet was eventually found inland from the marsh. Then, she ran into the arms of her owner’s father when she was found.

Ms. Oakes, a care home owner, told The Guardian: “Relief just poured over me. It was just absolutely fantastic to have her home.”