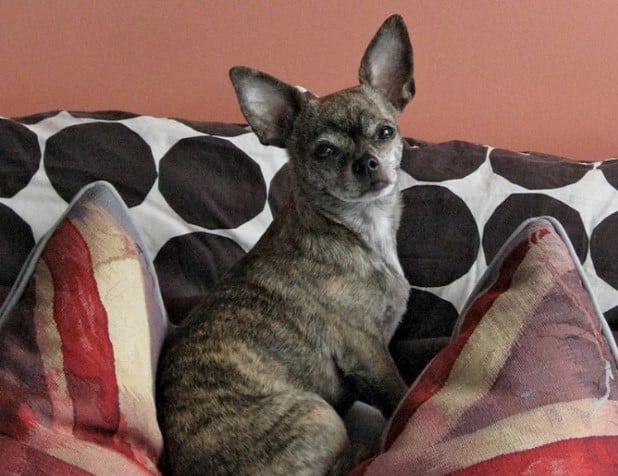 How I Found My Chihuahua Bessie

“I’ve never seen a Chihuahua that color before.” “Nice tiger print.” “What do you call that pattern?” Walking with Bessie is a bit of public performance, but I can’t fault people for their interest. If it weren’t for Bessie’s coat, she probably wouldn’t have ended up with me.

I couldn’t have a dog. I lived in a Brooklyn apartment—one that was relatively big at 900 square feet. But an apartment nonetheless. I didn’t have a backyard, and what’s more, dogs weren’t allowed. But that didn’t stop me from wanting a dog. I’d created a nearly impossible portrait of my mythical pup-to-be after knocking on the door of my childhood home in South Carolina and being greeted by a brindle Chihuahua.

I got a tour of the house much smaller than I remembered. And I left with a mental checklist of my dream mutt: from a shelter, an adult, and a bigger Chi mix, about 10 pounds. I had no idea how demanding a list that was, though it didn’t matter since a dog was out of the question.

A friend suggested that I sign up to walk dogs at the Brooklyn Animal Resource Coalition, my local shelter. So, I filled out the paperwork one Saturday and went back for duty after work that same week. Mostly what you see on the streets and in the shelters in New York are Pit Bulls, so I expected to get that.

I love big dogs and was looking forward to being put through my paces by a pent-up hunk of muscle. I was surprised when the staff person led out a tiny, droopy-looking dog wearing a polo shirt. “You can tell she just woke up,” he said.

Leash in hand, I wondered if they started all volunteers small. Instead of a big dog yanking me along, I gently pulled a little one who was not interested in leaving the shelter. She wouldn’t take a single step. It was late, so I picked her up and headed off to get in 30 minutes before closing time.

When I put her down a few blocks away, she sniffed, peed, and did the usual doggie things, but without much joy. She had a cherry eye and didn’t smell particularly good. But here she was: a 10-pound brindle Chihuahua mix. When we returned to the shelter, she was shivering, so I picked her up again. This time, she shifted her weight against me. “Can I request her the next time I come?” I asked as I handed her over. It took only two more walks and a plea to my landlord before I adopted Bessie.

I’m sympathetic to strangers who react to her brindle coat as though they’ve just spotted a unicorn on the streets of Brooklyn. After all, I still have trouble believing she materialized myself.