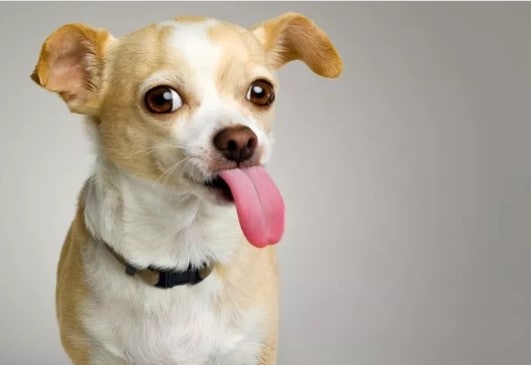 A disabled Chihuahua puppy brings comfort and joy to an Arizona man who was recently told his brain cancer is terminal. As many pets do for those with medical conditions that leave them with pain, mental anguish, anxiety, and much more.

In November, Andrew Kuzyk underwent surgery to attempt to remove the brain tumor found back in August. Still, his wife told KSAZ-TV that doctors could not remove all of it because it is “wrapped around his memory.”

Two months earlier, Kuzyk and his wife’s dog gave birth to her second litter of puppies. According to his wife, Pamela Anderson, her dog Claire got pregnant after they waited too long to neuter their other dog Charlie.

Champ a six-month-old white Chihuahua with one brown ear and one brown spot over one eye. He was one of the puppies in the litter but was born without his two front paws. When Kuzyk and his wife Anderson saw the little pup, they knew they had to keep him for themselves.

“His front paws are missing, so I said we’re not getting rid of him because I don’t want anybody to hurt him,” Anderson told KSAZ-TV.

What did the kite say?

The couple said Claire initially rejected Champ and was worried he might not survive, the East Valley Tribune reported. Kuzyk said he felt the puppy was “very similar” to him and decided to take him “under his wing.”

A few weeks ago, the couple was told that Kuzyk’s radiation and chemotherapy were no longer working. And Champ is now stepping up to provide comfort and company.

“He is such a joy to us,” Anderson told the East Valley Tribune. “I just feel like he’s here for a reason for us.”

Research has proven that animal-assisted therapy provides numerous physical and mental benefits, including the release of serotonin and lower blood pressure.

UCLA People-Animal Connection (PAC) also states that animal-assisted therapy can reduce pain. Reduce the number of medications an individual might need and lower anxiety, among other benefits.

In addition to providing these health benefits, many cancer patients report feeling less lonely when around dogs.

While Champ can use his front elbows to run, the couple said they want to invest in a wheelchair to help Champ with his overall mobility. Anderson told KSAZ-TV that his back is starting to bow, and they do not want it to get broken.

The couple is raising money through a Facebook fundraiser to purchase the front leg wheelchair Champ requires. The total goal is $350.

Newsweek reached out to Pamela Anderson and the UCLA People-Animal Connection but did not receive a response in time for publication.