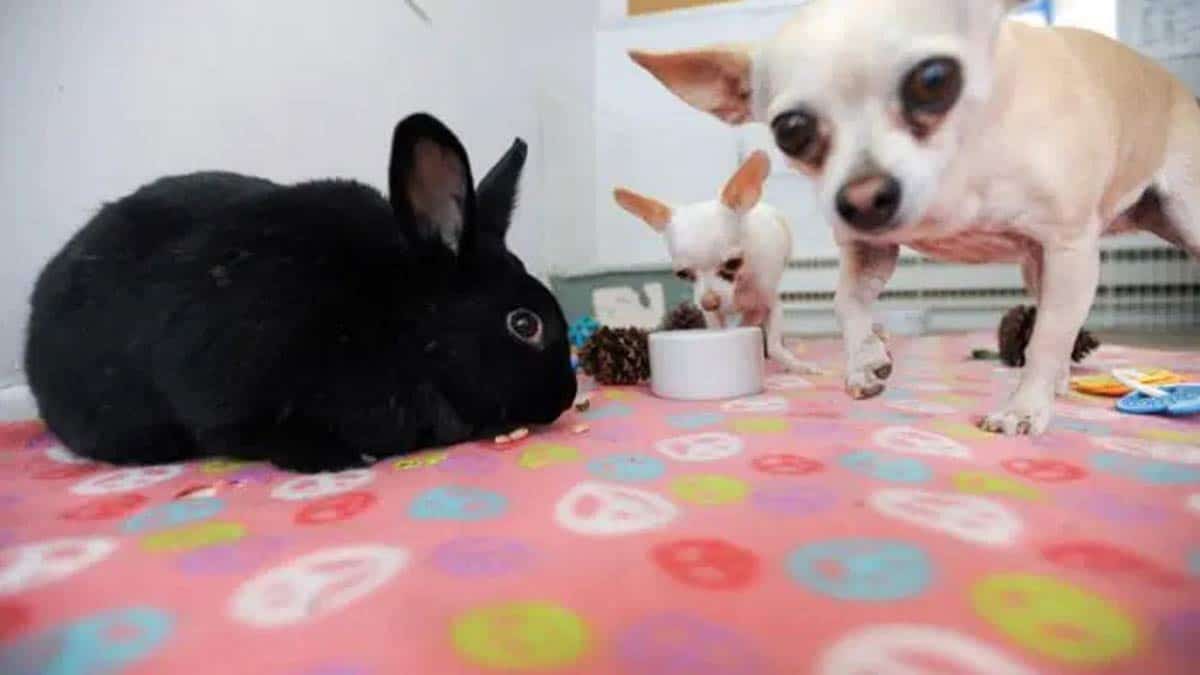 Office Bunny and her Chihuahua Friend

When switchboard operator Kay Sullivan shakes a Ziploc bag filled with Cheerios, Girly Girl the rabbit dashes out of the cardboard box she’s been sleeping in. The little bunny and her Chihuahua friend are adorable, to say the least.

Nose twitching, the big bunny hops over for a treat. “We’re only supposed to give her a few of these,” Kay says, feeding three Cheerios to the rabbit. Then the bunny snarfs them up and looks around eagerly for more.

The little bunny and her Chihuahua friend

Girly Girl, whose original name was Hawkeye (because she’s missing an eye), earned her feminine nickname when she moved into the little switchboard office over a year ago. The nickname stuck, and because she’s such a good officemate, Girly Girl herself stuck around too.

She made her big move after losing her bonded partner. Bunnies are very selective about their friends. When they do bond, they partner for life and become each other’s biggest support system. Bunnies who lose their partners go through a grieving process; they can lose their appetite and become depressed and lethargic.

Girly Girl needed a change of scenery to perk her up again. Fortunately, one of her caregivers at the Bunny House happened to be transferring to the switchboard office. The small, quiet space seemed perfect for a bunny run. There’s even an outdoor enclosure where Girly Girl could stretch her legs when the weather is nice. Her caregiver decided to give it a try to see if she’d be happy there.

The best candidate for the job

Laid-back Girly Girl turned out to be the best candidate for the office bunny job. She was completely unfazed by hustle and bustle in the busy switchboard office, and already knew how to use a litter box to keep her area neat and clean. After securing all electrical wires behind a screen, Kay gave her the run of the place.

What most impresses Kay about Girly Girl is what an interactive pet she is: “I didn’t realize (rabbits) have such personalities.” Girly Girl loves treats, and her favorite is a banana. When she feels a banana craving coming on, she’ll hop up to Kay and paw at her leg like a dog. She’ll do the same to weekend switchboard operator Mary Smith, who gives her not only a chunk of banana in the mid-afternoon, but also some lettuce at the end of each day. If Girly Girl thinks that Mary’s forgotten to give her the lettuce, she’ll start making funny, little murmuring noises, and scurrying back and forth until she gets it.

Besides treats and attention, Girly Girl enjoys the company of Kay’s two tiny Chihuahuas. One of the Chihuahuas, Sweet Pea, is smaller than Girly Girl – and quite enamored by her. She’ll often try to play with the rabbit and end up falling or crawling on her. But that’s OK with Girly Girl, who is interested in Sweet Pea, and will sometimes follow her around. Kay explains that rabbits frequently coexist well with other species, and “she likes the interaction with other animals around her size.”

Indeed, Girly Girl is quite relaxed and comfortable with her officemates. The switchboard office might be quite far from the Bunny House, but Girly Girl is happy as can be as the star in her home away from home.