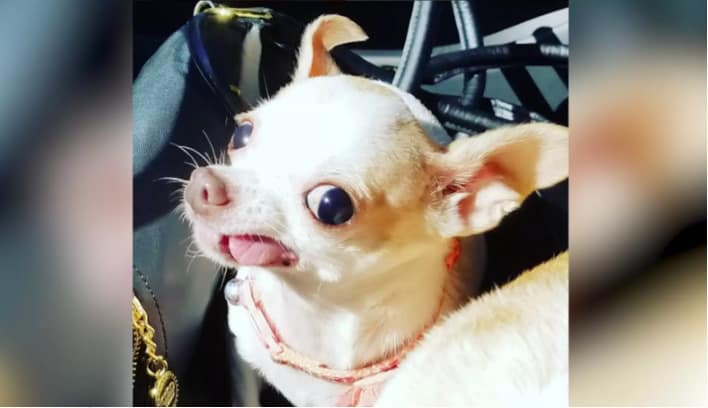 Shelter Said This Chihuahua Was Too Aggressive To Adopt

All it took was a video.

Shannon Crismier’s friend, who volunteers for Saving Carson Shelter Dogs in Los Angeles, had posted it on Facebook and tagged her. In the video, a tiny Chihuahua crouched in the corner of a kennel, growling and snapping.

While some people might get turned off by a dog like this, Crismier says she loves adopting dogs with issues. “They tend to be the best dogs after you rehabilitate them,” she says.

The next day, Crismier went to the city shelter to see the dog named Jojo. Jojo initially growled and snapped at Crismier, but Crismier was patient – she sat in Jojo’s kennel and spoke to her in a soft voice. After about an hour, Jojo had lost some of her fear, and Crismier could pet her.

The next day, Crismier went to the city shelter to see the dog named Jojo. Jojo initially growled and snapped at Crismier, but Crismier was patient – she sat in Jojo’s kennel and spoke to her in a soft voice. After about an hour, Jojo had lost some of her fear, and Crismier could pet her.

Crismier contacted her friend, who runs a local rescue group called Leashes of Love. Her friend came to help, but she gave Crismier a word of warning. “[My friend] said, ‘it looks like Jojo’s got some issues. You can see her limping in her cage. She’s probably going to be expensive. Are you ready for that?’ And I said, ‘yes, this dog is my dog. I want this dog.'”

Crismier’s persistence paid off – she got her dog, and Jojo got the best life she could ever imagine.

While Crismier doesn’t know everything about Jojo, she’s pretty sure she came from a backyard breeder. It’s also pretty clear that Jojo had been physically abused. “She has a cracked pelvis, a cracked knee, and two broken legs,” Crismier says. “Unfortunately, they’ve already healed, so she has a severe limp on her right side. Somebody had to kick her or do something for her to have that sort of damage.”

Jojo is also old – probably about 10. She’s missing most of her teeth, which makes her tongue hang out at funny angles.

But all it took was a little love for Jojo to emerge from her shell. “She’s very playful,” Crismier says. “Just like a puppy. She’ll even chase her leg – I’ve never seen a dog do that before.”

Crismier now takes Jojo everywhere she goes, carrying her around in a doggy tote bag. And when they’re home, Crismier showers her with love and attention. “She’s been a perfect angel,” Crismier says. “Jojo’s never bitten me. She’s never growled at me. She just likes being with me, and she loves just to do stuff.”

“She always makes me laugh with that tongue always sticking out all the time,” Crismier says. “When I leave work, she’s waiting for me at the door. Or if I go anywhere, she’s waiting there, tail wagging.”

“I think people think I’m crazy for adopting the kind of dogs I adopt,” Crismier says. “But I always like to get the ones most people don’t get.”

For anyone who wants to adopt a senior dog, Crismier couldn’t be more encouraging. “For people that might work a lot, they’re the perfect dog to adopt,” she says. “I have a foster who doesn’t like to go for walks, she just likes to snuggle, and she’s super easy as they sleep a lot. So you get the love of having a dog, but you don’t need to take them for an hour walk every day. They’re also not chewing on things because they don’t have teeth. It’s just a good way to save a life and not spend a lot of time with the dog if you don’t have much time.”

To see more cute photos of Jojo with her tongue sticking out, visit her Instagram page.