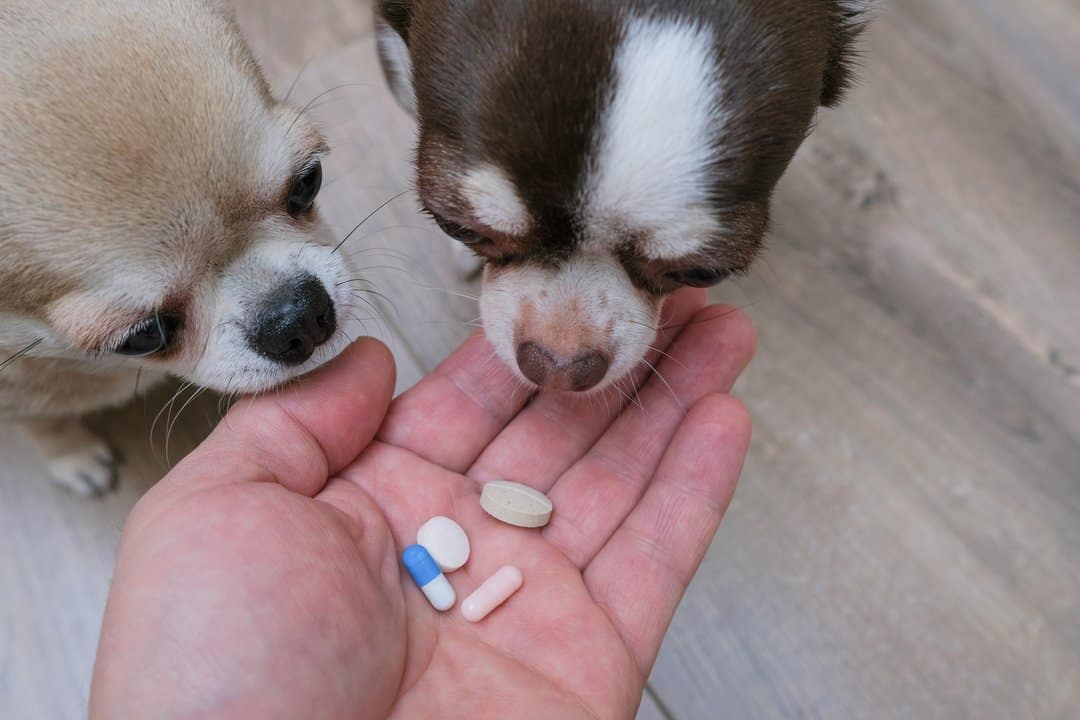 Pill Problems: Keep Your Chihuahua Away from Those Meds

Recently, I dog-sat two little dogs for a friend who went on vacation for just over a week. I like to think of myself as a competent dog owner and foster-care provider, but I experienced just about every sort of problem with medicating one of the dogs that a person can imagine. I have an excuse: I also have three of my own dogs, 12 foster dogs (mother Great Dane and her 11 puppies), and my son’s dog staying with me while he travels for his sport, so I was a TAD distracted, but even so.

Aforesaid Great Dane got the pills down off a shelf in the kitchen that I thought was high enough, and managed to open one bottle, which contained a chewable form of medication, and ate them ALL. I have been through this once before; a few years ago, I fostered a Labrador who swiped a bottle of chewable medication off my kitchen counter and ate them all, costing me a pretty penny at the emergency vet clinic in the middle of the night. Given that the Great Dane foster has already scored butter, bread, and a few other things off my counter, I HAD put the pills on a high shelf – just not high enough.

Given that the Dane weighs 96 pounds, and the Chihuahua that the medication was prescribed for weighs less than 10 pounds, and because the dose was low and the bottle wasn’t full, no harm was done. Except that I had to call my friend’s vet and confess to my incompetence (because I had to buy more medication), which sucks because she’s MY vet, too.

My friend had left written instructions: twice a day, the little dog was to receive one of those pills, one of these other yellow pills, and ½ of yet another pill which was white. One evening, in dim light, I couldn’t tell which ones were white and which were yellow, so I looked at the labels – which BOTH said, “Give ½ pill twice daily.” I should have looked at the labels when my friend had given them to me! It took me a day to reach my friend, who was easily able to clarify that the vet had increased the dose of that one medication recently, though my friend still had some of the bottles whose label indicated the old dose. Moral of that story: Make sure any medications you receive are clearly and accurately labeled, or re-labeled!

Not near another one

I was to give the pills to the Chihuahua in a small piece of thick bologna. Every once in a while, the Chihuahua chewed into a pill and spit it out. I watched carefully and was able to re-administer the pill in another piece of bologna. Except for the time that she spit out the chewable pill and my friend’s OTHER little dog dove for it and swallowed it. I saw the pill hit the floor and saw the other dog dive, but even though I let out a yell and grabbed for him quickly, he was quicker. Moral: Don’t allow any other dogs to stand around looking to mooch a piece of bologna, lest they grab a pill!

I’m not going to be hanging out my shingle for boarding other people’s dogs any time soon. That was nerve-wracking. But apparently, not enough to prevent one further error.

I’ve been keeping the mother, Great Dane, I’ve been fostering apart from her puppies for the past 10 days or so. She needs to be spayed so she can get adopted, and her milk needs to be all dried up before she can get spayed. The puppies don’t need it anymore, though they still try to grab ahold of her any chance they get. They also jump up at her face, and she – SUCH a good mom that she is – she always obliges by regurgitating any food she happens to have recently consumed. And the puppies dive into the pile of wet food. Yum! It’s a completely natural, instinctive thing – it’s how mama dogs bring food home from the hunt for their babies – and of course, gross by our standards.

It has developed that the mom and the puppies were infested with worms (roundworms and tapeworms), but even after deworming, they have had persistent but intermittent diarrhea, and have not been gaining weight as nicely as they ought. The vet tech at the shelter asked me to bring in some fecal samples, and it was discovered that they all had coccidia, too. (This is a protozoal parasite that can be transmitted via the fecal-oral route . . . say mom has it and the puppies step in her poop and lick their feet.) We treated the whole family for that, but diarrhea persisted . . . and so we tested for giardia (another protozoal parasite that can be transmitted via the fecal-oral route), and they all had that, too. So I am currently giving all of them meds twice a day for five days.

The other evening, I had mom in the living room, where I gave her the meds. Then I let the puppies into the kitchen from the backyard, stepped over the baby gate, and put mom out into the backyard via a side door. Then I gave the puppies their meds, one at a time, putting each one over the baby gate from the kitchen into the living room as I administered their medicine. Only, I had one dose of medicine left over. I counted puppies again, 1, 2, 3, 4, 5,6, 7, 8 9, 10 . . . Where is puppy 11? I look out the window, and there is the mom and puppy 11 . . . eating the food – and meds – that mommy just obligingly regurgitated for him onto the ground. When I let the puppies in, I hadn’t counted carefully enough, and one was still outside. I ran out there, and made the mom and the pup back away from the pile of vomitus, and poked through it myself – fun! ­ but it was too late to see or know. Had she vomited the pills? Eaten them again herself? Did the puppy get them instead? Without making them both vomit, there was no way to know. Shamefully, I had to call the vet tech at the shelter and confess to yet one MORE person that I had screwed up – and what should I do now?

She assured me that there is a LARGE margin of safety with that particular medicine, and that even though the mom’s dose was much higher than the puppy’s, even if the puppy ate all the mom’s meds, he would be fine; but we should add another dose to the end of the mom’s protocol.

So – whew – I somehow skated again, not killing anyone, and not having to go to the emergency vet, but I’m sure not proud. I hope, at least, you can learn from my mistakes. I hope to do so!

What sort of medicine administration errors can you help other dog owners avoid?