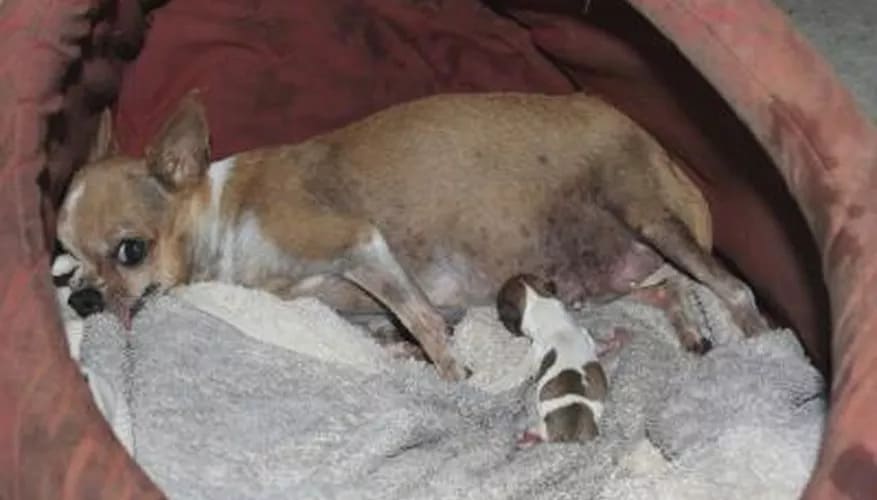 The gestation period for Chihuahuas is a little over two months, but a lot can happen during that time, and some of it can be dangerous for your mama Chi and her pups. Those with experience with pregnant Chihuahuas understand the risks and recommend adoption over breeding. If you’re determined to become a grandparent to Chihuahua puppies. It’s wise to familiarize yourself with the potential risks for pregnant Chihuahuas. Such as the size and number of puppies and health issues, including hypoglycemia and eclampsia. It’s also important to know the warning signs to watch for.

Size of the Puppies

Newborn Chis are tiny, but not proportionately so in comparison to their mother. In addition to being “big” puppies compared to their mothers. Chihuahua pups have large, round heads that are difficult for the mothers to push through the birth canal. Because these issues can cause problems for mother Chihuahuas, cesarean sections are frequently necessary; some Chihuahua parents even opt for planned C-sections.

Size of the Litter

The average size of a Chihuahua litter is three puppies, but they’ve been known to give birth to up to 10. The litter size can cause problems for mother Chihuahuas; fewer pups isn’t always a better scenario. With a large litter, the developing puppies might need more room than the mother has to give. Which can lead to premature delivery or even a burst uterus. If your Chihuahua is only carrying one or two puppies, they can grow uncommonly large, making it even more difficult for the mother to give birth naturally.

Hypoglycemia is a common problem for Chihuahuas in general. But it can become an issue for mothers and puppies alike when a female is pregnant. Your mother-to-be needs sufficient nutrition to ensure that her blood sugar doesn’t drop to dangerous levels that can cause seizures or even death. A mother Chi who has hypoglycemia can have hypoglycemic puppies, as well.

Sometimes mother Chihuahuas develop a condition called eclampsia, also known as milk fever. It’s caused by low blood calcium and can be brought on by poor nutrition during pregnancy. A large litter for a small dog can be an issue, too, as numerous puppies will demand more food from their mama. So this condition usually occurs within a month after puppies are born but also has been known to show up in the last few weeks of pregnancy.

You should consult an experienced veterinarian regarding the health and treatment of your pregnant pooch. Any odd behaviour or symptoms should be brought to your vet’s attention. Stumbling, glassy eyes, listlessness and sometimes seizures are signs of low blood sugar. Irritability, panting, muscle spasms, and fever indicate that your Chihuahua has developed eclampsia. Additionally, take your pregnant Chi in for regular checkups during gestation. Your vet can keep an eye on developing issues as well as monitor the growth of the puppies to help determine if a planned C-section will be necessary.