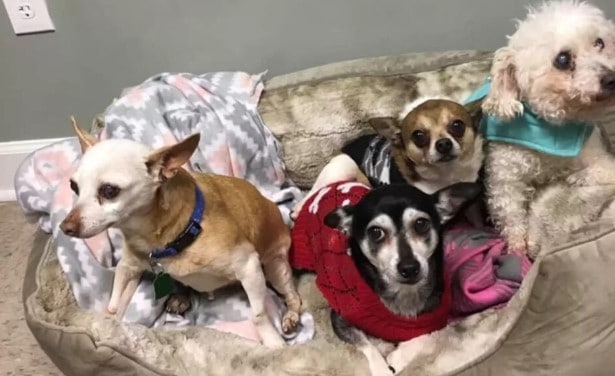 They’ve been inseparable for eight years and need a family that wants them both.

After their owner passed away, Zachary and Pee Wee were taken to a big public shelter in North Carolina. The top was already very crowded when they arrived and couldn’t accommodate them, and Adoption First Animal Rescue soon pulled them. When the old Chihuahua pair first arrived at the rescue, it became immediately apparent how much the couple loved each other and how important it was for them always to be together.

How many years have they been together?

Zachary and Pee Wee have been together for all eight years and couldn’t imagine life without each other. They have an extraordinary bond, and everyone at the rescue loves getting to know them and learning how close they are.

“They cuddle all of the time.” Nicole Johnson, an Adoption First Animal Rescue staff member, told The Dodo. “They want to be curled up and look to each other to feel safe. When separated, Pee Wee gets very depressed and has difficulty warming up to new people!”

Zachary is the more social of the two, and while Pee Wee can be very shy, with Zachary by her side, there isn’t anything she can’t conquer eventually.

“Zachary is the more friendly and loving one,” Johnson said. He loves to be held and cuddled. And Pee Wee takes her time to trust new people. And she likes her space and only wants to be cuddled after she trusts you!”

After watching and loving them for a few weeks. Everyone at the rescue was so touched by Zachary and Pee Wee’s sweet bond that they decided to do something extraordinary for them.

They decided to throw them their very own wedding.

“We thought as close as they are to each other, they deserved their fairy-tale wedding after all these years,” Johnson said.

The rescue got a wedding dress donated, and it fit Pee Wee perfectly. They dressed Zachary in a cute little tux, took the pair outside, laid out a blanket …

… and, surrounded by their favorite volunteers. Zachary and Pee Wee were finally married after all these years of loving each other.

“The weather cleared up just in time for the big event,” Johnson said. “They were both very proud and had the sweetest smiles!”

Now that they’re married and have declared their love for each other to the world. Zachary and Pee Wee only have one more wish to find the perfect home to cuddle in for the rest of their days.

Zachary and Pee Wee would do best in a quieter home with no young children. They love car rides and hanging out with other dogs. Especially other chill seniors, and above all else, they want to be loved.

Zachary and Pee Wee have found each other, and now they want to find the perfect family.