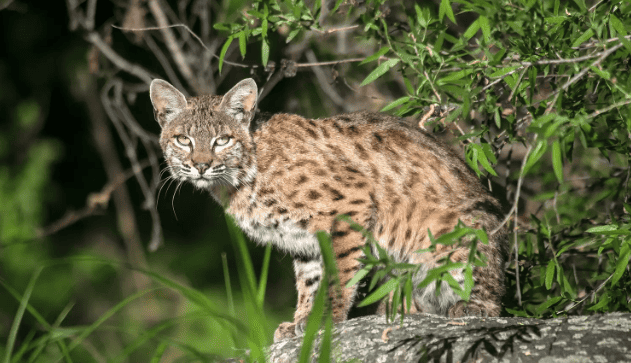 She Saved Chihuahua from Bobcat Attack: ‘Don’t Mess with My Little Baby’

“The cat came around the corner and just latched onto him,” the chihuahua’s owner Christina LaRock said. A dog owner reportedly confronted a bobcat and saved her beloved chihuahua in Barre, Vermont, on Thursday morning.

Christina LaRock told NECN that she was out for a walk with her dog Tiny when the bobcat attack occurred.

“The cat came around the corner and just latched onto him,” she told the outlet.

LaRock said she stepped in after the bobcat could not bite through Tiny’s harness and was able to pull the little dog away by the pet’s leash. The brave owner then fended off the bobcat herself.

“I just gave him a good old left hand upside the head, and I think it stunned him enough that he took off,” LaRock said.

She added, “Don’t mess with my little baby Tiny!”

LaRock told the outlet that she was grateful that her young son didn’t join her for Tiny’s walk on Thursday. And that she planned to take her dog to the vet to be checked after the attack.

Following the attack, LaRock posted in a community Facebook group about her experience.

“My dog was attacked by a bobcat,” she wrote in part. “I was able to scare it off, and me and my dog are ok.”

Paul Brown, a game warden for the Vermont Fish & Wildlife Department, told NECN that “all indications are that the cat viewed the dog as prey” in this incident.

He added that bobcats are rarely a danger to the public.

“Whether we are aware of their presence or not, they are still here. And they live in our neighborhoods and around our houses,” he said. “With very few exceptions, pose no threat to human health or safety.”

LaRock is still encouraging neighbors to be on the lookout for bobcats. She also filed a report with the Barre City Police Department and spoke to the Vermont Department of Fish & Wildlife about the incident. She saved a life.