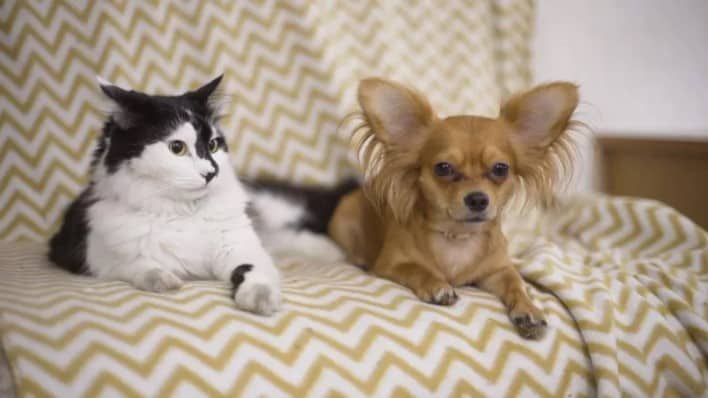 Hilarious footage of a chihuahua tentatively trying to position himself alongside an increasingly agitated cat who has had its afternoon nap rudely interrupted has captured the imagination of dog lovers across social media.

The tiny canine’s courageous efforts were chronicled in a clip uploaded to TikTok by leafy garnish.
Originally posted on January 8, three different versions of the video have now been shared. Drawing in an accumulated 51 million views.

The most recent of the three videos have amassed over 32 million views. So, with dog and cat fans flocking to comment on the high-stakes animal drama.

In the video, the unnamed chihuahua can be seen attempting to back his way into the cat’s bed. Where an increasingly frustrated feline is watching on.

The tiny dog is positively shaking from the tension as he edges back, eager to take up the vacant space alongside the cat in an especially comfy-looking bed.

Matters are made even more dramatic by the presence of a second cat, watching on in the background as the drama unfolds.

Throughout his maneuvering, the chihuahua can be seen nervously glancing over at the cat, who, at one point. Emits a meow that probably translates as something a little more substantial in cat-speak.

Thankfully, for this particular pet pooch, the mission goes off without a hitch, and he can settle next to the disgruntled feline. The clip can be watched here.

Throughout his maneuvering, the chihuahua can be seen nervously glancing over at the cat, who, at one point. Emits a meow that probably translates as something a little more substantial in cat-speak.

The suspense of it all proved fascinating, to say the least, for fans on TikTok.

IamLetitiaGarner was a big fan of “the cat watching in the back.” Giving off an unmistakable vibe of “let’s see how this goes.”

Others like Bonnie Spencer suspected there was more to the video than first meets the eye, writing. “Why do I feel like that’s the dog’s bed, but the cat owns it now?!”

LauraLove had a special appreciation for the dozing cat and how they looked at the invading pooch with an air that said: “the audacity of dogs!”

FTC also reserved a shout-out for how the chihuahua edged himself into position, commenting, “he parallel parked into that.”

This isn’t the first time a dog has gone viral after invading a cat’s personal space. One clip chronicling a similar encounter previously went viral thanks, in no small part, to the cat’s hilarious reaction to the ensuing chaos.

These kinds of encounters can go well, though. For example, this dog reacted heartily when a tiny kitten came over for a cuddle.

Though cats and dogs have been known to clash, it’s a different story regarding pet felines and chihuahuas.

“Many of them are smaller than most cats you might have to stop the cat from chasing the dog instead of the other way around.” It said. “These dogs are confident and energetic if your cat can accept that, the two may very well get along wonderfully.”