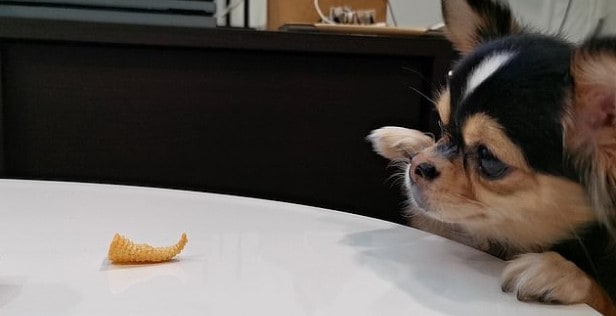 This is the heart-melting moment a Chihuahua struggles to reach a discarded crisp on the living room table that is just slightly out of reach.

Thunyatorn Chittitrakanpong was playing with her one-year-old puppy, Chanel, when the potato snack fell out of the packet.

She then briefly left the room and came back to see the adorable dog standing on its hind legs and pawing at the table inches from the crisp.

And Thunyatorn, from Chonburi, eastern Thailand, filmed her pooch’s desperate but futile stretches.

The 30-second clip shows Chanel, a black and brown-furred Chihuahua, standing next to the table where she is eyeing up a curvy crinkle-cut crisp about a foot away from the edge.

She sticks out her right arm, and the tips of her claws scrape the side of the crisp, rocking it slightly.

Chanel then takes time to consider her options, and her deep black eyes peer greedily at the crisp.

Realizing it is out of reach, she switches her tactic and tries to guilt Thunyatorn into getting it for her by staring helplessly at her owner.

But, when Thunyatorn doesn’t help, Chanel goes back to blind scrambling about on the table without getting near the crisp.

Thunyatorn said: ‘It was my fault for not noticing the crisp left on the table.

‘But Chanel knows I’ll always give her something to eat if she does a cute puppy face.

‘This time, I had to say no, though. I didn’t give it to her because it’s human food and unhealthy for her. She needs to learn not to climb on tables, too.’