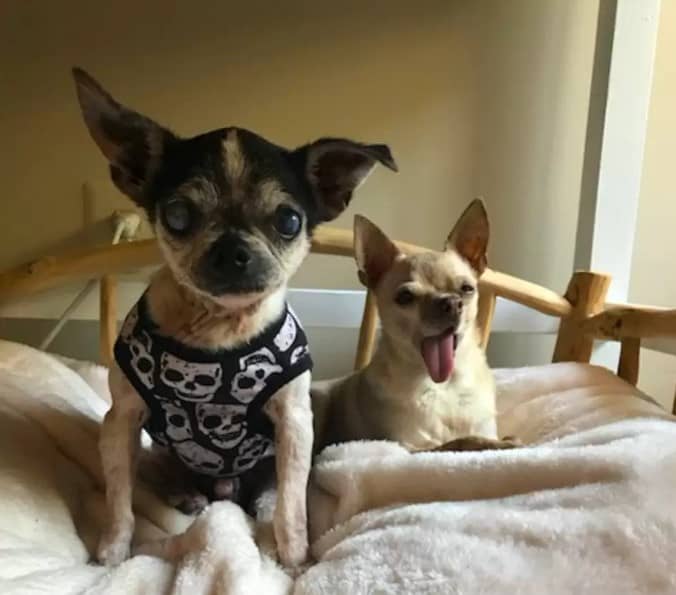 Some dogs stood hunched over a giant bowl of cornmeal, their backs red and hairless from skin infections. In the distance, a pack of large dogs chasing each other trampled something tiny straight to the ground.

The barren field was packed with dozens of sickly, mange-ridden dogs. The old mattresses and couches that littered the lot was their only sleeping spots.

This was the scene rescuer Odessa Gunn witnessed on April 28 while accompanying Slaughterhouse Survivors to a facility in Harbin, China. Run by a Buddhist group that saves dogs from meat trucks en route to slaughterhouses.

The Buddhist group is often the last line of defense before the dogs are killed for food. But due to a lack of funds and resources, the overrun rescue usually has to surrender the animals it saves to other organizations like Slaughterhouse Survivors.

Gunn rushed to the small Chihuahua’s side.

After seeing the large dogs topple right over Ethel, Gunn rushed to the tiny Chihuahua’s side.

“As soon as I saw her, I knew she needed to come with me,” Gunn, who already had ten other senior rescue Chihuahuas at home, told The Dodo. She was so shell-shocked, and I held her in my arms, and she leaned right into me.

She was weak and had several injuries to her body.

The tiny senior Chihuahua was covered in mange and barely had any hair. She was weak from only being fed cornmeal and looked to be completely blind. One of her rear legs was injured, as she refused to walk on it.

While it’s unclear where Ethel lived before ending up on the meat truck. Gunn said she was likely stolen from her owner’s yard or abandoned and picked up on the street.

In China, where over 10 million dogs are slaughtered for food each year.

It’s widespread for dog farm owners to pay drivers to round up pets or stray dogs. Then, they are either brought to the dog farm or sent directly to the slaughterhouse to be killed.

China hosts the grisly Yulin dog meat festival, which celebrates the torture and slaughter of dogs and cats to recognize the summer solstice. An average of 10,000 dogs, and thousands of cats, are killed each year for this “celebration.”

While many larger breeds, like Jindos, hounds, or golden retrievers. Are commonly killed for meat, small dogs are not exempt from the same cruelties.

“They use many toy breeds and puppies in soup,” Gunn said. “The dogs are boiled alive and that was probably going to be Ethel’s fate … There’s nothing anyone could ever tell me for me not to be disturbed about the torture these dogs are put through, and I’ll never understand it.”

Once Gunn took Ethel from the Buddhist rescue group…

She got her to a vet clinic right away. Although Ethel was in horrible shape, she started feeling so much better after eating some proper food and getting a bath to soothe her irritated skin. After a month of care, she was healthy enough to fly to her new home with Gunn in California.

“ When I met her in the airport, I think she finally realized her life was about to get much better,” Gunn said. “She was exhausted, but I could see a little sparkle in her eyes.”

Gunn’s other dogs welcomed Ethel into their home with open paws.

One pup, in particular, Jose, has especially liked her and it’s not hard to see why.

“She’s the sweetest little thing,” Gunn said. “I think at some point in her life, somebody must have loved her. She gives kisses, and she and Jose ‘Little Man’ follow each other everywhere. They’re inseparable.”

Luckily, Ethel’s mange is no longer contagious, but she is still recovering and receives daily medicated baths and antibiotics to ward off infection. With the help of Compassion Without Borders (CWB), which Gunn regularly volunteers with, Ethel will be getting all the veterinary care she needs to live a healthy life.

“I was overwhelmed with how adorable she was,” Christi Camblor, veterinarian and executive director of CWB, told The Dodo. “She was clearly in poor shape, but her tail never stops wagging … We’re trying to get her in a better place of physical health first and do what we can to preserve some vision. Then the next step will be full X-rays of the leg and dental.”

While Ethel appeared blind at the time of rescue, Camblor believes she still has limited vision in one of her eyes. They’ll bring her to the eye doctor in the coming weeks to learn how she can be helped.

Until then, Ethel is learning from her foster siblings just how pampered she deserves to be.

It’s not official yet, but Gunn is already considering making little Ethel a permanent family member. And after everything she has been through, it’s clear Ethel would love to stay there.

“She loves to sleep in bed with me, manage and all,” Gunn said with a laugh. “I’m like, ‘No problem, come right in!’ She’s truly a miracle dog, and I’m in love with her already.”