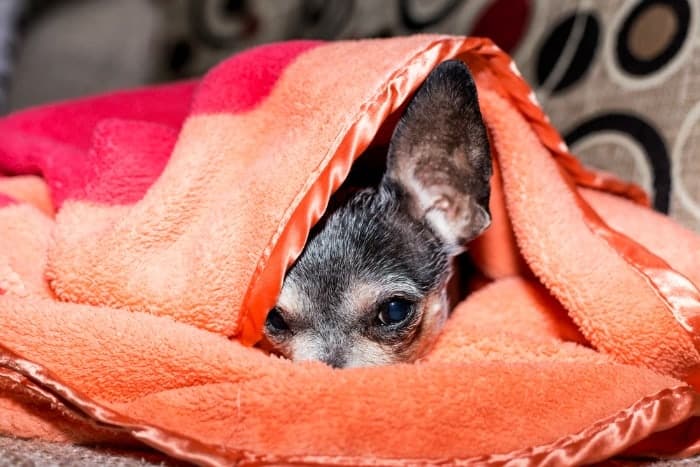 Here are a few things: I’d be a pleased lady if I had a chi for every time they were spoken. Rosie is a rather extreme example of the dangers of backyard breeding in Chihuahuas.

I was inspired by Don’t Make These Comments To Great Pyrenees Owners on It’s Chi Or Nothing to write this post. Kelsie’s Pyrs, Mauja, and Atka might as well be a different species than chihuahua-type dogs like Matilda! At the same time, we can all relate to dealing with hearing the same comments over and over again.

1. You should let her have babies!

I’m flattered that you think my dog is cute, but she will not have puppies for you to take home. Chihuahuas are the second most surrendered and euthanized breed in shelters besides pit bulls, and they’re incredibly abundant here in California.

Moreover, breeding dogs isn’t something to do willy-nilly, and Chihuahuas are prone to genetic problems like luxating patella partly because of generations of careless backyard breeding. The only way to breed dogs responsibly is to get health testing for both parents and take serious consideration to improve the breed.

2. My dog could eat your dog as a snack.

I know. And I’m scared to death of that.

In my chihuahua Facebook groups, I frequently see chihuahuas with fatal injuries from attacks by larger dogs. While most dogs we meet want a quick sniff, I always fear the worst.

I’m careful to read a dog’s body language before I allow it near my dog. I look for a relaxed face, forward-shifting, curious ears, and a friendly, wagging tail.

I raised Matilda to be confident by biting my lip, feigning calmness, and resisting the urge to pick her up whenever we saw a big dog. Picking up your little dog can make her an intriguing target for a giant dog and can make her associate all dogs with anxiety and panic.

But sometimes, big, playful dogs come at us so fast that I have milliseconds to decide. It’s scary, especially when the dog is loose and unattended.

So, please don’t remind me how tiny and edible my dog looks.

3. You could pretend she’s a service dog and take her anywhere!

When I first heard about sites that send you fake service dog accessories and convincing doctor’s notes signed by shady Belgian “physicians,” I didn’t see any harm in it – and I seriously considered it. After all, one of those phony service dog deals is cheaper than the cost of dog airfare (I paid $125 each way for our domestic flight). Being able to fly with Matilda for free would save us hundreds.

But then I started hanging out in science-based dog training groups, where many members are disabled and depend on their dogs to live everyday life. The rise of fake service dogs makes it harder for disabled people to do the simple things we take for granted, like grocery shopping or attending college classes.

Untrained, fake service dogs can distract their hard-working service animals. People sometimes mistake real service dog teams for imposters and may ask invasive questions or ask for proof, which can be stressful to the individual.

Even faking Emotional Support Animal (ESA) status to avoid renter’s pet fees and airline fees could contribute to stricter regulations that complicate life for a real ESA. I wouldn’t want to do anything to make a disabled person’s life more difficult.

Now, my stance on smuggling a chihuahua around in a purse without claiming it is a service animal fair game. If you can smuggle your dog around in public without getting noticed, disturbing other people, or making your dog unhappy, I feel that’s acceptable.

Picking up poop is part of being a good dog owner, no matter the size of your dog. Even Matilda’s little tootsie roll turds could ruin someone’s day – their kid could try to eat it, their dog could roll in it, or it could get on their shoe. I am a firm believer in poop karma. If your abandoned dog turd ruins someone’s day, then the Universe will manifest a day-ruining poop in your life. It could be weeks, months, or just hours later. I don’t mess with that.

When you give Matilda love, you’re putting yourself at risk.

She will jam her tongue up your nose and into your brain when you’re caught off-guard. So, will French kiss you and have Frenched at least three grandmas with no shame at all?

She will use the fullest extent of her tongue. And will make your nose burn. She will put her paws on your face and neck so you can’t get away, wagging as she does. Could you not say I didn’t warn you?

In retrospect, I probably should train my dog not to love people so hard, but where’s the fun in that? She will stop if you tell her “off” or gently move her away. But if she were to be indeed discouraged from giving people “The Matilda Treatment,” life wouldn’t be the same.

So, endure those sweet, sweet Chihuahua kisses and smile through the pain.