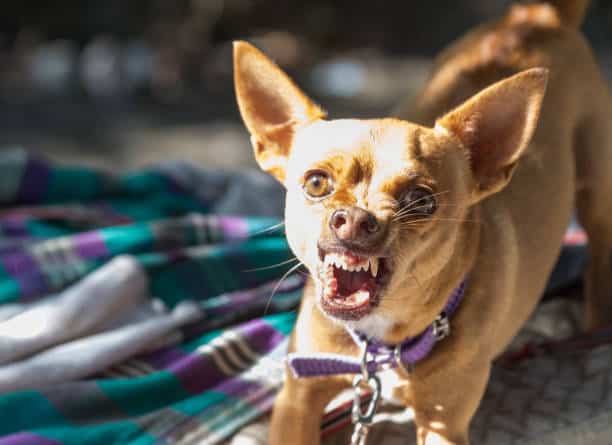 How many teeth do Chihuahuas Have?

Your Chihuahua’s got a toothy grin. But wait… It looks like your pup has some problems with its teeth.

What could it be?

In this article, you’ll find out:

How many teeth do Chihuahuas have?

Chihuahuas have 42 as an adult and 28 deciduous or milk teeth as a puppy. When they reach the age of 8 months to 1 year old, these milk teeth will start to fall out and will be replaced by their permanent teeth.

One day, you caught your Chihuahua grinning from ear to ear.

Look at all my chompers. Do I look pretty?”

They sure look adorable. But you can’t help but wonder,

“Why does my Chihuahua seem to have more teeth than other dogs?”

Your puppy has the same amount of teeth as other dogs.

The only difference is that they’re smaller than most. So their teeth look like they’re overcrowding their mouths.

To show you how your Chihuahua’s mouth looks from the inside, here’s a chart from VCA Hospitals.

How many teeth does a Chihuahua have?

Based on the chart above, can you count how many teeth your Chihuahua has?

They have 42 teeth in total. And this comes in two sets.

The top, which is known as the maxilla, has 20.

And the bottom, which is called the mandible, consists of 22.

Now, let me tell you about their different kinds.

First are the incisors. They have 12 of these.

These are in front of your Chihuahua’s mouth.

And these are used for tearing the meat from the bone, and they are also used for their grooming.

Like scratching or getting something out of their fur.

Next are the canines or the ‘pointy fangs.’

Your Chihuahua has 4 of them.

These teeth are used for tearing apart meat. And also for holding on to something.

Your dog’s canines are so powerful.

That’s why they can beat everyone in the game of tug-of-war.

And then they also have 16 premolars.

These are the ones used for shredding meat.

If you see your puppy chewing something on the side of their mouth, those are the premolars they’re using.

The last is the molars at the back of your Chi’s mouth.

Molars are used for grinding food, especially the hard ones like their kibbles and chewing bones.

As an adult dog, your Chihuahua has 42 teeth.

But before that, they only used to have 28.

These were called milk teeth, and their primary or deciduous.

Puppies lose their milk teeth once they reach the age of 8 months to 1 year old.

I haven’t seen my dog lose them ever.”

Your puppy may have lost them while they’re eating or playing. And they accidentally swallowed them.

That’s why you didn’t see it.

As for their blood, well, your dog has also swallowed it.

So after their milk teeth have gone, their permanent ones will start to show up.

Trivia: Smaller dog breeds like your Chihuahua are more likely to develop dental problems than bigger ones.

Their small mouth has to accommodate the same amount of teeth as a large dog.

There’s so little space in between.

So it’s hard to clean them up.

Because of this, your puppy could also have several dental issues.

Like the periodontal disease caused by bacteria in your dog’s teeth.

This gum disease is most common in Chihuahuas and other small breeds. (Like the Pomeranians, Malteses, Yorkshires, etc.)

Here’s how it occurs:

So plaque starts to build up in it after a while.

The hardened plaque will then turn into tartar.

And it’ll form below the gum line.

This will cause your dog’s gum to pull away from the tooth.

“Ooh, what happens next?”

Okay, so now that your dog’s teeth are exposed, their bones can be easily infected by bacteria.

Which can cause bone destruction and infection.

And if your dog’s bone is infected, their teeth could decay.

Eventually, they could all fall out.

The infection caused by bacteria will not just destroy your Chihuahua’s tooth.

It will also infect their bloodstream.

And can lead to more severe problems affecting their kidney, heart, and liver.

They can live for up to 20 years if they’re in good health.

But according to Prestige Animal Hospital, a dental problem like periodontal disease can cut their life short by 1-3 years.

So what are the causes of this disease?”

Head to this article for more information on this and other Chihuahua health issues.

The first cause of periodontal disease in Chihuahuas is eating soft food.

Dogs don’t need to brush their teeth as often as humans do.

This is because they have their au naturel way of cleaning their teeth.

Their meal’s rough texture acts as your dog’s natural toothbrush.

Even gnawing on bones can also give your pearly dog whites.

So if your puppy always eats soft food like mashed kibbles mixed with water, their teeth will not get cleaned enough.

And the plaques in between their teeth won’t loosen up.

I am not brushing their teeth.

Not brushing your dog’s teeth could also cause periodontal disease.

Your Chihuahua could still be at risk even if they’re eating and chewing on kibbles.

Take a look at your Chi’s chompers.

See how they’re so close to each other?

Mainly because their teeth are overcrowded.

Their mouths are so small.

But bacteria will seep between their teeth if you don’t do it. They are causing it to rot and have an infection.

How to recognize periodontal disease

So how can you tell if your dog has gum or periodontal disease?

WebMD says you should look out for the following signs: