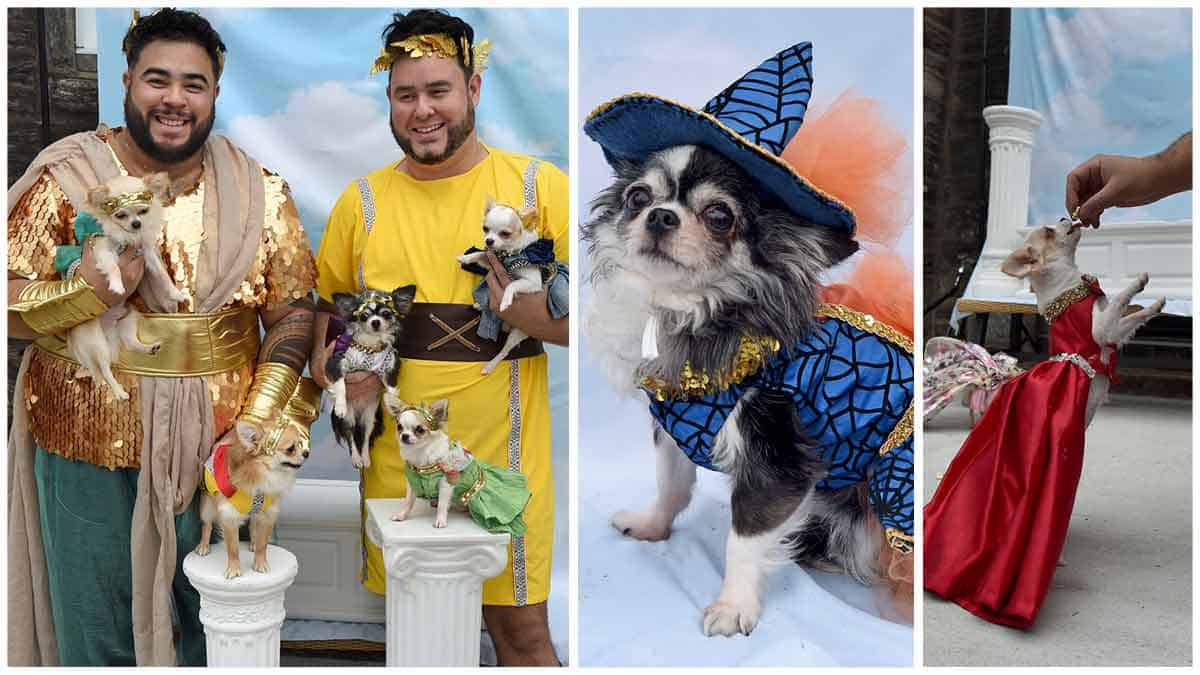 This Philly Pet Fashion Designer and his Five Chihuahuas

Meet Roberto Negrin, a Philly pet fashion designer. At Roberto Negrin’s Juniata Park home, the Christmas tree gets decorated in October. The door is guarded by five Chihuahuas known as “The Chi Gods.” And, the shelves are lined with golden paw-shaped trophies.

For 10 years, Negrin, 32, has designed opulent couture costumes for four-legged fashionistas (starting price: $200). From a Princess Diana dress for a Chihuahua to a Liberace-inspired suit for a pug, he creates each outfit by hand. The magic happens in the basement studio of his rowhouse, surrounded by silk, sequins, and Singer sewing machines.

“I want the dogs to look elegant. And I want people to feel happy when they see my work,” he said.

Negrin’s five Chihuahuas — Zeus, Athena, Poseidon, Gaia, and Selene — all of whom are named after Greek gods often serve as both his muses and his models.

“I’d rather design for pets than humans. They are more fun, they don’t complain, and they’re usually happier anyway,” he said.

Negrin, who once planned on becoming a nurse, said his career as a pet fashion designer was born of necessity.

Growing up between the Dominican Republic and New York City, his second home, Negrin never had any pets. In his early 20s, he adopted his first dog. That was a poodle he named Hec-lin, when she was abandoned at a veterinary clinic.

Negrin fell so hard in puppy love that he’d hide Hec-lin in his bag. He would bring her with him to his job as a shoe store manager in New York City. When she was old enough, he started taking her on doggy play dates. That’s where he first heard about pet beauty pageants. Negrin wanted to enter Hec-lin but couldn’t find her any suitable attire.

“When I would go to the stores I couldn’t find things that would fit my dog — or my personality,” he said.

So Negrin asked his mother, a talented seamstress, for help creating an outfit. The only problem? She was afraid of dogs. In fact, nobody in Negrin’s family had ever owned a dog. Coming from the Dominican Republic, they believed dogs should be relegated to guard duty in the backyard and not spoiled inside of a home.

“I’m the only one who’s crazy about dogs in my family. My family doesn’t care about me being gay. They are more stressed with me being a pet owner and designer and how I treat my dogs,” he said. “I take my dogs to France for their birthday, I throw them puppy showers.”

Despite her hesitation, Negrin’s mother taught him how to sew. And the first outfit they created together for Hec-lin won her “best dressed” in a pageant.

“We didn’t win the crown but we felt like we won the whole deal,” Negrin said. “After that, a new journey began for me.”

Other pet owners started asking Negrin to create outfits for their dogs and in 2011, he was named Pet Designer of the Year at the New York Pet Fashion Show. He began getting work designing pet costumes for celebrities like Howard Stern and Ice-T and started getting jobs for everything from an Xbox commercial in Australia to a fashion show in Amsterdam.

In between, Negrin would visit Philadelphia, where his dad owned an auto repair shop in Juniata Park, and in 2015 he decided to make this city his home.

“I fell in love with Philly, and New York had become such an expensive place to live,” he said. “As an artist, sometimes you need to lower your pace, sit down, and focus on making your pieces. Philly was the perfect city for that.”

Negrin continued his design career here, and in 2017 he starred in an online series for Bravo called Fierce, Furry and Fabulous in which he gave epic couture makeovers to Philly area dogs.

But despite his success, Negrin said being a pet fashion designer doesn’t always pay the bills. To supplement his income, he also works as a dog party planner and sometimes as a ride-share driver.

“I’m not shy to say I’m a working artist and when we need extra income we just go and do Lyft,” he said. “People say, ‘But you’re a celebrity! You’ve been on TV!’ but we still have to keep working.”

Today, Negrin lives with his partner, Eriberto Figuerora (“We call ourselves the Bertos”), who shares his love of pet fashion and cosplay.

When Hec-lin died last year and the couple was left with just one dog, Athena the Chihuahua, they decided to get another. And then another. In the span of a year, they adopted four Chihuahuas, each one of whom now has its own wardrobe.

“Dogs are my canvas, and I’m just the painter,” Negrin said. “I don’t know if they know they look good or not, but they know positive energy and reinforcement and when you dress them up and they get attention, that makes them extra happy.”