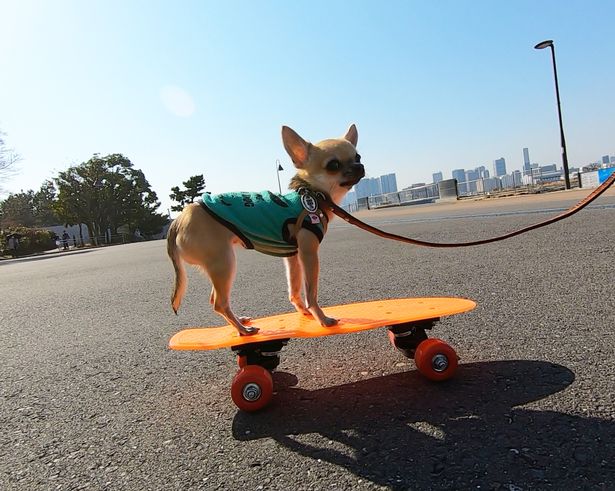 When Papico the Chihuahua had a go at skateboarding, her owner Mikaki Maki, 48, from Japan, didn’t think she’d be able to pick it up. But she surprised everyone and became the ‘world’s smallest skateboarder’

A tiny Chihuahua has been dubbed the ‘world’s smallest skateboarding dog’ . So after adorable videos of her unusual talent garnered attention online. Two-year-old Papico now prefers to live life on four wheels. And even gets walked on her lead with her orange board.

Owner Mikako Maki, 48, from Japan, introduced Papico to the sport at a young age and was “surprised” by her impressive skills. She says the little pooch makes strangers smile. When she balances on her pint-sized skateboard instead of walking on her four paws.

Mikako said: “Papico is curious about everything and full of energy, so I want her to have many new experiences.

“My boss’ dog had skateboard and I borrow it for Papico. She stepped on the board by herself and sat down, soon, she started to jump on to the moving board.

“My husband bought a small size skateboard and he tried to lead Papico to kick on the board and she picked up.

“Many people says they feel happy when they see Papico’s picture and video. Papico makes people smile and I’m very happy with that.

“I was surprised that Papico can skateboard, it is so amazing and cute, I’m so happy that my dog can make people happy so filming her on the skateboard is great.”

Another clever dog has left people online in stitches. And after it was spotted sitting on a surfboard on a beach in Cornwall.

The black Labrador rode the board all the way to the shore before standing up and getting off like it was nothing. Where he was then greeted by his very impressed owner.