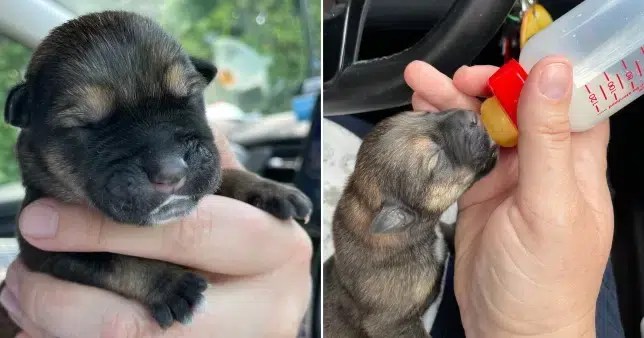 Tippy, the puppy, is the last surviving member of her abandoned litter of 11

This is Tippy, the last surviving member of her litter after she and the other pups were left in woodland with their umbilical cords still attached.

The puppies were just a few hours old when a callous owner dumped them.

They were rescued by the RSPCA, who rushed them to the vets to save their lives. But sadly, only Tippy pulled through.

The other ten pups all had congenital disabilities or severe infections and passed away over the following days.

Tippy survived three brushes with death caused by repeated infections. And it seems she’s thankfully now on the road to recovery.

Sara Jordan, who helped rescue the pups and has been giving Tippy round-the-clock care – said: ‘The puppies required very intense care as they were completely reliant on us, as they would be their mother.

‘The ray of light is Tippy seems to be doing so well, although it has been touch and go.

‘This Chihuahua almost died three times due to urinary infections. But she was given immediate veterinary treatment and fought to pull through.

‘She is gaining a personality now, and it was a relief when she opened her eyes at two weeks old.

‘Tippy sees me as her mum. And is always very close to me and tries to talk to me, especially if it is feeding time. Or if she is complaining because it is too warm.

‘Initially, she had to be fed every 90 minutes. So I was up in the night quite a lot, and I had to take her everywhere to keep a close eye on her. I juggled it with my work as an RSPCA inspector, which was very tiring but worth all the effort as she is so adorable.’

Tippy, who’s now five weeks old, is still in Sara’s care, living with her and her seven dogs and six cats.

Lovely Tippy has a problem with litter.

When she’s healthy enough, she’ll be able to find a forever home.

Meanwhile, the charity is still trying to find the culprit who dumped the fragile pups in the first place.

Sara said: ‘It is so insensitive to think these vulnerable puppies who were only a few hours old had been dumped like this.

‘I am concerned that their mother is out there and also may require veterinary attention.’

Anyone who sees anything suspicious in the area or knows a dog who recently gave birth but doesn’t have a litter to nurse can confidentially contact the RSPCA’s appeal line on 0300 123 8018.