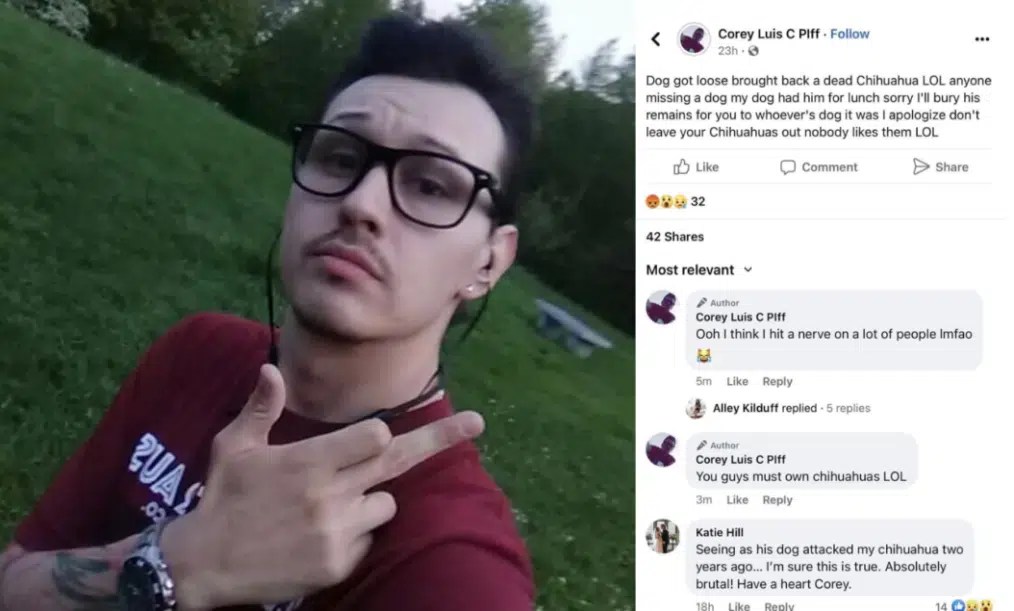 This is Corey Caraballo from Worcester. He wrote on social media that his Pit Bull ate a chihuahua for Lunch, and the comments didn’t stop.

He’s a career shitbag who’s spent so much time in Worcester District Courthouse that the judges let him pitch a tent there to save money on gas.

You name it – drug distribution, driving without a license, assault, and battery on a family member, resisting arrest, assault with a dangerous weapon, receiving stolen property, abuse prevention orders – if it’s a statute in Massachusetts, the Pubestached Pirate found a way to violate it.

Because, of course, he does.

Yesterday he announced on Facebook that his pit bull got loose, went out and killed a chihuahua, ate it for lunch, and apologized even though nobody likes chihuahuas.

The post didn’t go over well, as his pit bull had attacked small dogs before. Hundreds of comments were made calling him out, and he never denied it at no point.

Instead, he did the opposite.

But given his criminal history, plus the fact that he calls himself “c-piff” and got that put on a flat-brimmed hat, it seemed like there was a good chance it was true.

Dozens of people notified the police and eventually made the post private. He still hasn’t said anything like, “just kidding,” but he has repented how crazy it is how n words move for a b****.

He did defend his use of the n-word, though, claiming to be Hispanic.

His dislike of black people comes from the fact that his mother’s boyfriend was black, but she cheated on him with a white guy and conceived him, and for that reason, his Mom’s black boyfriend used to beat the crap out of him for not having any melanin.

His auntie Quercy from Florida was the only person on his page supporting him and urged him to remove the post.

But it’s still up.

Granted, he also said that his credit score is 760.

And I think we can all agree that’s a lie, so hopefully, he wasn’t being serious about the dead chihuahua. But if there’s ever a guy you would assume is telling the truth when he brags that his pit bull got loose and ate another dog for lunch, it would be this chode.