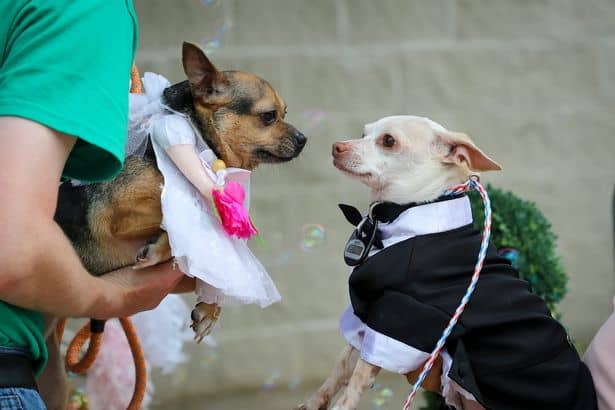 True love comes in all life forms – as two shelter dogs got married in a mini chapel with a bubble made specially to mark the occasion.

Their families surrendered the pups in April 2022 as they could no longer look after them.

The newlyweds first met in the SAHS after both were there to receive dental surgeries and had an instant connection.

In a bid to find homes forever for Peanut and Cashew and after noticing their developing relationship, staff organized the wedding ceremony on May 18.

We saw the dogs dressed up for the event at the event. And a chapel was made especially along with a red carpet flanked with dog-shaped hedges.

Lucia Almanza, a Public Relations Associate at SAHS, said: “The ceremony was to celebrate their love and recovery journey.

“Their small, intimate wedding day was shared with staff, volunteers, and our closest friends.

“The event included a beautiful walk down the aisle, bubbles, music, and cake, of course!”

She added: “A few days before, we had some volunteers who constructed Peanut and Cashew their chapel in their own time. And they complete with a bubble machine for added fun for the dogs.”

Although Peanut and Cashew are available to be adopted individually. Lucia also said staff hoped that the husband and wife are kept together to enjoy married life.

The San Antonio Humane Society is a non-profit, no-kill organization that was founded in 1952.

Every year SAHS shelters medically treat and rehabilitate thousands of dogs and cats who remain in their care until adopted.