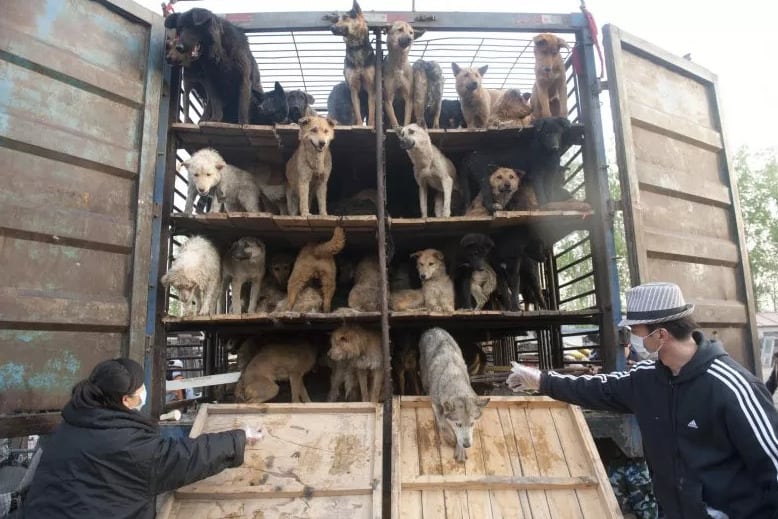 Ethel, the dog, was once destined to be a meal in the Dog Meat Festival. But now, she’s living large with ten other dogs in her Santa Rosa, California home. She’s one of many dogs rescued from the dog meat trade who live with loving families in the U.S.

Humane Society International estimates that people kill 30 million dogs and cats annually to eat. And a third of them are slaughtered in China. During the 10-day annual Lychee and Dog Meat Festival in Yulin, vendors kill an estimated 10,000 dogs to serve as food. The 2018 festival will run from June 21-30 and is controversial among Americans and Chinese people alike.

There is hope for some dogs, though. Documentarian and rescuer Odessa Gunn told Newsweek that dog-loving rescuers in China could legally intercept dog meat trucks on their way to slaughter. If the drivers don’t have paperwork proving that they or the company own the dogs—” which they never do,” Gunn said— the rescuers can confiscate the dogs. Gunn has volunteered in China and witnessed this process.

Then those rescuers will scan those dogs for identifying microchips. Then they try to return them to their owners, as some turn out to be stolen pets. Sometimes larger breeds come from dog farms wherein farmers breed and raise them for slaughter.

When Chinese rescuers confiscate dogs but can’t find the original owners, they’ll go to local rescues. In some cases, American animal rescue groups will step in and bring animals stateside.

A rescue from the state of New York took in 200 dogs from Henan province earlier this year, sparing them from the hot pot. A San Diego rescue transported 18 dogs to Southern California, and a golden retriever rescue in Massachusetts saved five dogs from the meat trade.

Some who criticize the consumption of dogs have taken to the internet in the hopes of getting the dog meat festival banned. For example, a Change.org petition to stop the festival is nearing 3 million signatures.

How can westerners eat dogs?

However, outrage about animal mistreatment brings up ethical quandaries. How can westerners, who eat cows, pigs, and chickens by the billions, condemn eating dogs? Most Chinese people don’t eat dogs. But even if they did, some argue that protesting dog meat while eating bacon clad in leather is racist and imperialist. It’s hard to imagine someone coming to the U.S. to rescue pigs or cattle.

Still, rescuers argue that dog meat is worse because at least the U.S. has humane slaughter laws for mammals. In contrast, China has no federal laws regulating animal welfare or humane slaughter. As dogs are cute and popular pets worldwide, rescuers will continue their work whether the meat festival tradition continues or not. “The need [for rescuers] is so immense over there you can’t even imagine,” Gunn said.

Ethel was one of the lucky ones. The 15-year-old chihuahua went to Compassion Without Borders. As a group that brings animals from other countries needing rescue into the United States. From there, Gunn adopted Ethel.

“Ethel, despite everything she’s been through, is lovely and loving and happy,” Christi Camblor, executive director of Compassion without Borders, told Newsweek. “We’re grateful to have her healthy and happy. So she can move onto a phase in life where she gets the love and care she deserves.” 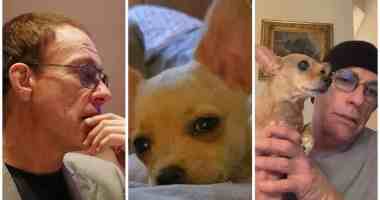