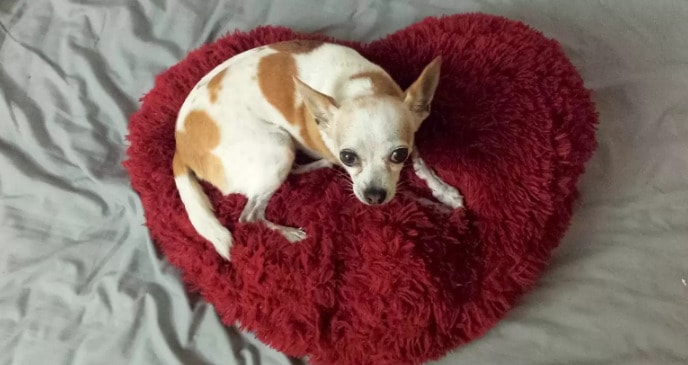 “She was not afraid of me. She wanted to be close to me, and we bonded instantly.”Someone at a puppy mill in Taiwan decided that this little dog barked too much. So her owner cut her vocal cords, and eventually when she could no longer produce puppies to sell, he dumped her at a high-kill shelter. #143

That’s where the voiceless dog, beaten down by years of breeding, would get the closest thing she may have ever gotten to a name: a stark steel tag that read #143.

But sometimes, it can hear even a dog with no voice. Johanna Quinn, who works with a local rescue called Heart of Taiwan Animal Care, found the dog. She arranged to have a contingent of death row dogs transported to Canada through Eleven Eleven Animal Rescue.

Number 143. Only this time, her rescuers gave her a real name – Akiko, which means “sparkle, bright.”

And soon, Akiko would shine a light on a Canadian woman’s heart.

Kimberley Ann Barley was already on a list to foster shelter dogs. She heard a Chihuahua from Taiwan needed a lift from the airport – and a temporary home.

Barley didn’t hesitate, bringing the exhausted dog home, where Akiko would sleep for days on end, only stirring to go to the bathroom.

“She had kind eyes that bulged from her little head,” Barley tells The Dodo. “She was skin and bones and was missing a lot of furs.”

Akiko was also heartworm positive, and several rotting teeth had to be removed.

“She was not afraid of me, and she wanted to be close to me, and we bonded instantly,” she says.

From the start, this dog knew she was home, and it just took Barley a little longer to get the memo.

While the woman wanted to give Akiko a forever home, she had just changed careers and wasn’t sure if her schedule would work for a dog.

“I took her to a meet-and-greet where potential adopters got to spend time with her,” Barley recalls. “I held back my tears every time someone filled out the adoption papers that day.”

By the end of that day, Barley had made her decision.

“I knew I couldn’t let my friend be adopted by anyone other than myself,” she says.

And so Akiko, who now goes simply by Kiko, began living up to her name earnestly and brightened every corner of Barley’s life.

Part of Barley’s decision stemmed from the grim steel tag Akiko wore when she was living at the shelter.

“Just like farmed animals are given,” Barley says. “I made the connection.”

And that’s how a death row dog without vocal cords found her voice. And became an advocate not only for “no-hope” shelter dogs but for animals everywhere.