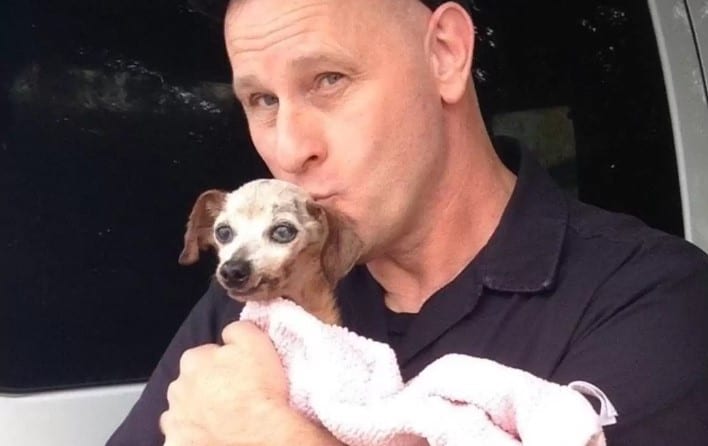 Tiny Chihuahua Was Living In The Middle Of A Freeway

A freeway is remarkable and dangerous for anyone to get stuck there. Much less a small, broken-hearted dog named Fae.

The 10-year-old Chihuahua mix jumped in the middle of rush hour traffic. In the worst situation on Interstate 605 in California, where it was heavily loaded.

No one knows how long this tired and sick old dog remained there in a state of order.

But Fae found the best roadside assistance when a man pulled his car over. And swept this 7-pound bundle of heartbreak into his arms.

At first, it seemed Fae’s life had taken the happiest turn. The man took Fae home to his wife. But she told him they couldn’t keep the ailing dog. And the man was forced to drop her off at Baldwin Park Animal Services.

And that’s when Elaine Seamans, a longtime volunteer at the shelter, got the call. She happened to be on her way there anyway.

What did the sergeant say?

The man who had dropped her off there had tears in his eyes.

“To me, it was an emergency,” Seamans says. “Her mouth was a total disaster, oh my god. But she was eating, and when I put her down, she walked just fine.

“I had to keep stopping her and picking her up and saying, ‘Don’t go away.'”

“I gave her soft food and water and a blanket,” Seamans adds. “When I smashed the soft food with a tongue depressor, she growled at me. The attitude. I thought, ‘You are going to be OK.'”

Fae’s strange surliness found just the right match in a man who calls himself Gåtor.

For his 50th birthday, Gåtor visited the shelter, where he met Fae. Love, naturally, ensued.

Also, they seemed to be cut from the same rough-and-tumble cloth. So instead of fostering Fae, Gåtor decided this dog’s road in life didn’t need any more detours.

“He decided to adopt her and keep her,” Seamans says.

And Fae was sprung from the shelter with help from Meade Canine Rescue. And she seemed to appreciate the lift to her forever home.

“She slept all night next to his chest,” Seamans says.

The At-Choo Foundation, a group that gives countless shelter dogs a second chance, is hoping to pitch in for Fae’s medical bills. But at just a year old, the group could use some help. Think you might like to contribute? Donate here.