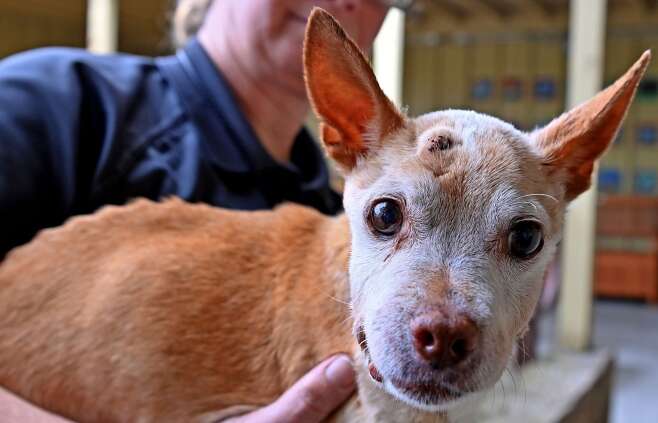 Chihuahua survives being shot in Head

A Chihuahua survived being starved and shot in the head. And shoved inside a bag to die, he is starting to regain his trust in humanity as he slowly and cautiously makes his way toward a happier fate than he almost had.

The 10-pound dog was named Lazarus by shelter staff for the biblical character who cheated death. Was discovered by chance during a traffic stop by the Jackson County Sheriff’s Department, said Kim Casey, manager of the Jackson County Animal Shelter.

Emaciated and struggling with extensive dental disease. The dog was one of two who were shot, presumed dead, and tossed into the vehicle to be disposed of.

Waiting inside the dark bag with the other dog, which was deceased, when the pair were discovered, Lazarus’ luck shifted only because a deputy decided to conduct a vehicle search.

“It was a Jackson County sheriff’s case. They pulled over a vehicle, and when they searched it, they discovered a bag containing what the occupants told the officers were two dead dogs,” Casey said.

“The people admitted to having shot the dogs and thought they were dead. One was, in fact, dead. But one was not.”

Casey said both dogs were Chihuahua or Chihuahua-mix seniors. It was heartbreaking to think of the little dog being traumatized as would-be caregivers shot him and then tossed him in a sack with “his dead friend.”

Where did they send him there?

“We took him immediately to (Southern Oregon Veterinary Specialty Center) for an evaluation and initial treatment. He had an obvious wound to the top of his head. … Whatever kind (of gun) it was, it didn’t do what they had hoped it would do,” Casey noted.

Casey said both dogs had medical needs “more than likely that somebody was opposed to paying for.” Casey declined to provide details of the criminal case related to the traffic stop or discovery of the dogs, citing policies associated with an ongoing investigation.

While Lazarus’ case is sad, Casey said it denotes an ongoing increase in neglect and abuse cases as pet owners grapple with a regional shortage of available veterinary care and a struggling economy where people acquire pets despite a lack of resources or ability to provide proper care.

How many animals did county officials save?

Last week, Jackson County officials rescued 32 animals from a property outside Rogue River after a neighbor reported a diseased and neglected dog tied up in the front yard of a property.

County animal control officers and sheriff’s deputies were granted a search warrant based on the condition of the reported dog. They later discovered two deceased dogs and a dead cat on the property. On the property, they rescued a menagerie of remaining dogs, cats, and exotic birds.

The suspects, Michael Lee Hamilton, 71, and Debbie Lee Hamilton, 61, are both of Rogue River. They were charged with three counts of first-degree and ten counts of second-degree animal abuse.

“More and more frequently, these things are happening. A lack of access to veterinary services is a huge part of it. People’s inability to care for their animals in general,” Casey said, noting that, left untreated, basic medical needs can escalate to expensive emergency scenarios.

“Most of it is neglect and not so much intentional cruelty. They can’t afford to provide proper medical care, or there’s not any access if they can afford it. Sometimes, these are likely people who cannot even care for themselves. I think these types of cases are reflective of people struggling the last few years.”

Casey said it’s always preferred to have an animal surrendered to county officials rather than deprived of proper care.

How was the 10-kilogram dog named?

Lazarus is scheduled for additional assessments in the coming week and, Casey hopes, a reasonably clean bill of health, given his age, deferred care, and a hole in his noggin.

Whether he’s in for veterinary treatment or even hospice care, Casey said he’ll feel cared for and not afraid during his final days, weeks, or years of life.

“I named him Lazarus because he came back from the dead. We’re just getting him follow-up medical care and hoping the vet doesn’t say he has some underlying issues. He has a horrible dental infection, and he was completely emaciated, but we hope that’s the extent of it,” said Casey.

“He’s been maintained on antibiotics right now and receiving appropriate nutrition. When we introduce a feeding program to dogs, who have been starved. We must reintroduce proper nutrition very slowly, so we don’t create other problems. As soon as we started the re-feeding program, he immediately ate. He was hungry and wanted to eat. It may not be comfortable for him to eat, but he’s eating, and he’s eating well.”

At 10 pounds, Lazarus may gain a few pounds, Casey said.

Barring bad news at the vet, he’ll be looking for some human to claim him as their own.

“He just kind of hangs out, waiting to see what’s gonna happen next,” she added.

“He’s been through a lot, but he’s doing better every day.”

For details on the different ways to support the shelter, including contributions to the shelter’s medical fund, see fotas.org.