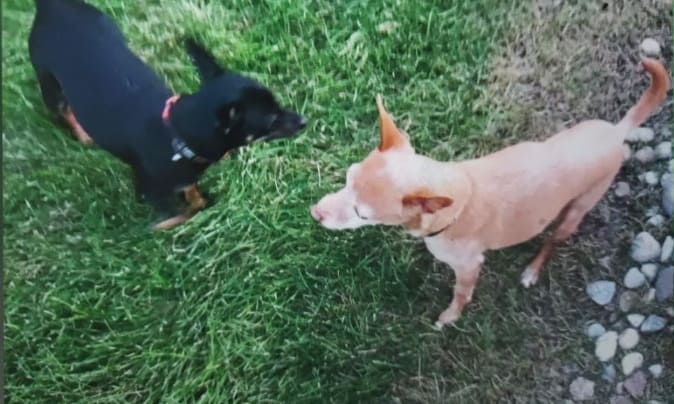 Coyotes kill three dogs in Southgate; women devastated by the loss of Chihuahuas.

Three dogs are believed to have been killed by coyotes in a Southgate neighborhood.

Two dogs are Chihuahuas owned by the same person. A disabled woman was devastated after losing her companion animals.

Wynema Timmons, 65, said that her next-door neighbor, Deborah Goulet, never did anything without her dogs, Nettie Jean and Pixie Dust. Nettie Jean was 13 years old, while Pixie was just a puppy, not quite one year old.

“She has MS and is in a wheelchair,” Timmons said. “Those dogs were her life, and they slept with her —they did everything with her. They knew those dogs at McDonald’s (restaurant).”

It’s believed that coyotes killed the dogs on Wednesday night.

According to Goulet, who lives in the Allen Road and Eureka Road area, the dogs went missing over a brief period: between 9:11 and 9:25 p.m. At first, she thought they might have been stolen, so they called the police.

“We walked the yard for 10 minutes and could not find them,” Goulet said.

Police told her that coyotes had killed both her dogs.

Goulet’s son, Linn Goulet, was at her house the following day to console his mother. He now lives in Livonia but said he grew up in Southgate, in that same house. As a hunter, he has seen coyotes many times and knows a person who killed as many as 100 coyotes in a year.

“They are in every city,” Linn Goulet said. “I used to see them on steel mills (property) running after geese, and it’s easier for coyotes in the city.”

For Deborah Goulet, her dogs were more than just pets. And they were like members of her family. Bound to a wheelchair and unable to do most things for herself, she said her dogs were her companions and didn’t know what to do without them as she held back tears.

Timmons said she believes it’s important to warn other people about the danger coyotes can pose, especially for those with small dogs and cats.

Brian Kocsis, an animal control officer with Downriver Central Animal Control, said their primary role is to serve as a domestic animal shelter. However, he said they do their best to assist the community with wildlife calls and raise awareness about wild animals such as coyotes.

“We’ve seen quite a significant increase in calls in Wyandotte, along railroad tracks, as well as Southgate,” he said.

In addition to Southgate and Wyandotte, Downriver Central Animal Control also serves the cities of Allen Park and Riverview.

According to Kocsis, people live near railroad tracks or properties that back up to wooded areas. Or fields should be extra cautious regarding coyotes. He said their agency does not have any means of trapping or relocating coyotes. And it’s his understanding that the same holds for the Michigan Department of Natural Resources.

Kocsis said that when coyotes are creating a significant problem under certain circumstances, the DNR may step in, but it’s not something they typically do.

Although coyotes can be active during daylight hours, especially near railroad tracks and in wooded areas, they are most active after sunset, which is when they do most of their stalking.

“Our first and foremost recommendation is to not leave pets and small children unattended in your backyard,” he said. “You should take small dogs on a leash and keep them within 10 feet of you.”

Those who choose not to leash their dogs when outside should, at the very least, have fencing to contain them in their yard.

“The more privacy, the better,” Kocsis said. “Dogs are known for jumping 4-foot fences, and coyotes can jump fences just as easily. A privacy fence over 6 feet is best.”

Another option for smaller breed dogs, he said, is reflective vests that have spikes around the neck and spine. However, he said the ones he has seen cost about $100.

“The easiest and most cost-effective (thing to do) is to spend those 5 minutes with your dog,” he said, referring to walking them outside on a leash, especially at night.

The agency’s other full-time animal control officer, Paige Wallace, responded to Goulet’s neighborhood on Thursday, shortly after neighbors found another dead dog on the block near a fence.

Downriver Central Animal Control concluded that both Goulet’s Chihuahuas and the third dog were killed by coyotes.