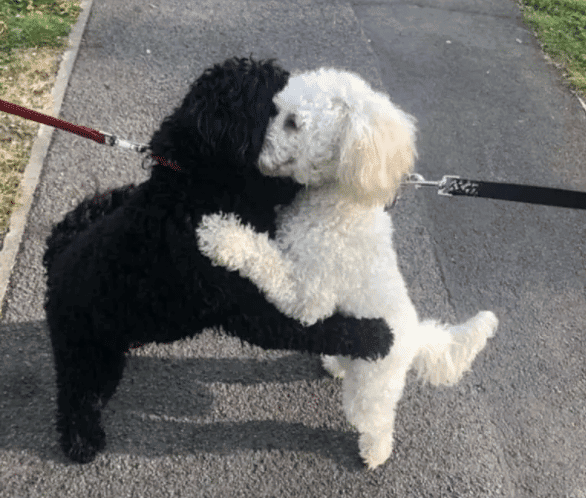 Dog Siblings Meet and Instantly Recognize Each Other

When was the last time you heard about dog siblings meeting randomly on the street and immediately recognizing each other?

It all started when two relative dogs that haven’t seen each other for a very long time, met when walking on the streets. They stopped and looked at each other knowing they are siblings even though time has passed.

These two cute cockapoos were little puppies when separated but never forgot each other. The dogs named Monty and Rosie were born last June.

“There were six of them,” Susan Killip, Rosie’s mom, told The Dodo. “But Monty and Rosie were always together.”

Killip’s friends who live in a nearby village adopted Monty and watched Rosie for a week but then the two puppies lost touch. That was until their reunion last month.

“It was so lovely, they both just jumped up and hugged each other,” Killip said. “It was amazing they remembered each other after 10 months of not seeing each other.”

This amazing story was shared on Twitter by Libby Pincher, who tweeted a conversation with her dad which now is all over the internet.

Her dad told us about this delightful turn-up by writing: “So, Dave was out walking his dog, and there was a couple walking towards him with a white version of his dog. Turns out they are brother and sister from the same litter. But instead of just playing as they do with other dogs, look at this.”

It’s probably possible that dog siblings have such warm reactions to each other like this because they feel something familiar in the other dog.

“Dogs of the same breed often gravitate toward each other,” Tufts University explains. “What we know is this: The scent of another dog stays with a dog for a long time.

Even if Monty and Rosie our adorable puppies don’t know exactly that they are brother and sister, it doesn’t really matter they still like each other.

“We will keep in touch,” Killip said. “[It’s] a bit difficult at the moment, but after this is all over, we’ll be having doggy walkies together.”