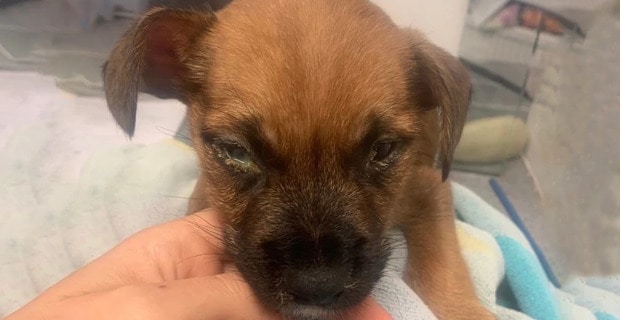 A helpless Chihuahua discovered it abandoned in a box and hidden under some bushes could not be saved by vets. There was a freezing puppy.

The black and tan-colored Chihuahua– thought to be just six weeks old – was sniffed out by another dog in a green space in Feltham, West London, on Saturday.

The dog’s owner went over to see what their pet had found. She was shocked to discover a tiny puppy wrapped in a blanket in a clear plastic box.

It rushed the puppy to the nearest vet, where it called the RSPCA to investigate.

When vets examined the Chihuahua, they found it very underweight and weak to walk or eat.

RSPCA inspector Nicole Broster said: ‘This is such a tragic incident, and it broke my heart that such a tiny puppy was left to suffer so much. And knowing he had been abandoned all alone when he desperately needed help.

‘The walker described him as “cold” when he found him. And when vets examined him, it was clear he was skinny, suffering from severe conjunctivitis, and couldn’t open his eyes.

‘He was also so weak and subdued he was unable to eat or take more than a few steps.’

The puppy was transferred to RSPCA Finsbury Park Hospital earlier this week. Some vets worked tirelessly to save him, but sadly he didn’t respond to treatment.

His condition did not improve, and despite all efforts to save him, vets made the difficult decision to put him to sleep to end his suffering.

Now, the RSPCA is keen to discover who abandoned the puppy and is appealing for anyone with any information to come forward.

Nicole said: ‘Abandoning any animal is cruel and completely unnecessary. We don’t know how long the Chihuahua had been inside the box. And in the cold in the bushes and vulnerable to all sorts of danger. Poor puppy was freezing.

‘It’s possible someone dumped him because he’s so poorly, and he could be a by-product of the cruel puppy trade.

‘It’s beyond belief that someone left him in those bushes and walked away.’

Thanking the walker who handed the Chihuahua to the vets, Nicole added: ‘Because of their actions, he was treated with love and dignity in his last few days and was given every chance of pulling through.

‘It’s always incredibly upsetting for us when an animal doesn’t make it.’

Anyone with any information about the puppy is asked to contact Nicole by leaving a message for her on the special inspector’s appeal line at 0300 123 8018.

All messages are left in confidence.