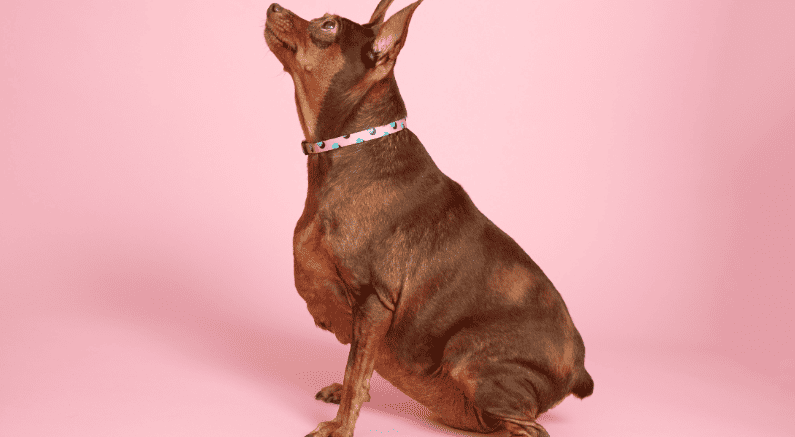 How Peggy the Rescue Miniature Pinscher Stole Our Hearts

As soon as we laid eyes on Peggy, we fell in love (how can you not, just take a look at her?!) After her original owner passed away when she was just one, she was in foster care for five years. Diagnosed with a thyroid condition, which caused her to put too much weight on her tiny frame, she was rescued by Friends with Four Paws and got a spot in Foster Dogs NYC’s “Operation Foster Bound” program. Soon after, she found a temporary home with her foster mom, Jess Gary, who works at BARK, where she gained fame with her “socially awkward” posts (#weareallpeggy) and her quest to lose weight. We talked to Jess about Peggy’s remarkable bonding ability and how Ollie helped her drop some of those lbs.

How did you first learn about Peggy?

There is a strong community of fosters and people who volunteer at various rescue groups in the Bark office. My co-worker showed me Peggy’s photo and said she needed a foster home, and I immediately knew I needed her. I have a weakness for tiny weirdos.

Why did you want to foster her?

I have a real soft spot for senior and special needs dogs who might otherwise be overlooked in rescues. These dogs are so amazing but may not be the most easily adaptable for one reason. I have two senior Chihuahuas of my own, and my youngest was rescue from a hoarder situation. When I saw Peggy, I knew she was a great dog who just needed someone to look a bit deeper than the surface and give her a second chance.

What was she like when you first brought her home? Socially awkward?!

I expected Peggy to be shy and lazy, but from the second she came off the van from Oklahoma, she was a ball of energy! She is socially awkward in the best possible way. She is a close talker, she doesn’t understand that some dogs might need personal space, she forces her love on everyone she meets, and it’s impossible not to love her. As an Oklahoma gal, she was intimidated by the big city noises and crowds but soon became a seasoned New Yorker.

How overweight was she when you first started fostering her?

She was 18 pounds when I first brought her home. Her weight was due to a thyroid condition. She is now on medication, and healthy food and gets regular exercise.

How did she react to Ollie, and how has it helped her slim down?

Peggy went nuts for her Ollie food! Mealtimes were her favorite part of the day. When I last weighed her, she was about 16 pounds.

Where did the #weareallpeggy hashtag come from?

That is 100% Katie Haller, the social media manager at BarkBox. When she met Peggy, she immediately saw a kindred spirit. She saw Peggy’s photo and thought, “this dog looks like how I feel all the time.” Peggy became a poster child for awkwardness and social anxiety. In Katie’s words, “Sometimes the perspective of a dog provides sort of a psychological distance that makes it easier to laugh at things that are stressful or uncomfortable.”

How do people react to her on the street?

People noticed Peg. Everyone who met her smiled. Someone once said, “She looks like a potato on legs!” but I think they meant it in the best possible way. Twice we got recognized in the park from her Instagram account!