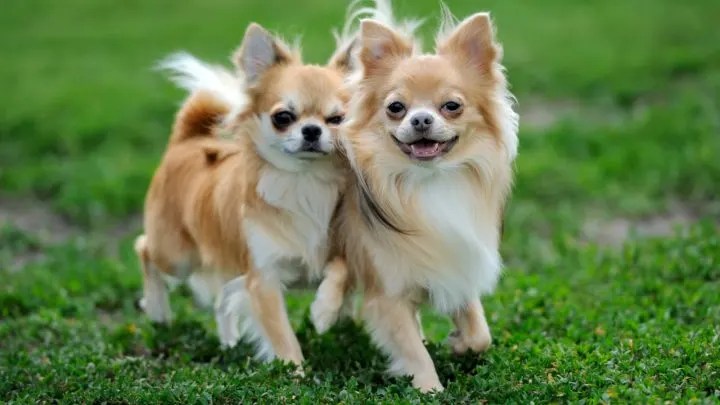 Chihuahuas are among the most popular dog breeds on the planet, and it’s not hard to see why: They become deeply attached to their owners, adorable, and for some strange reason, they’re convinced that they’re giant, menacing dogs. But, what is the difference between Male or Female Chihuahuas?

If you’re considering adopting a Chihuahua, you likely won’t regret it, but you have one last decision. Should you get a male or a female? As it turns out, there are a few key differences between the two sexes, so this guide should help ensure that you bring home the right dog for you.

Make no mistake, though — male and female Chihuahuas have more in common than differences. Many things listed here are slight variations, and you’ll be lucky to have any Chihuahua for a pet, regardless of sex.

Chihuahuas may be small, but those tiny bodies house oversized personalities. These dogs can be pretty aggressive and make surprisingly good guard dogs, given that they’re roughly the size of a loaf of bread. They may not be able to run an intruder off, but at the very least, they’ll let you know if someone’s there.

That feistiness can get them in trouble, as they often forget they’re not as big as a Great Dane. Their Napoleon complex can get them in arguments they can’t win, so you should always watch them around other dogs.

Named after the Mexican state of Chihuahua, they’re an old breed, dating back to at least 1520. That’s when we get the earliest known mention of the species, courtesy of a letter from the Spanish explorer Hernan Cortes, who said he witnessed the Aztecs selling the dogs as food.

It’s unknown what other purposes these dogs may have served in olden times, but today, they make excellent and affectionate companions. However, they tend to bond closely with a single person, so they may not be the best family pets, as they’ll choose one person at the expense of all the others.

That said, Chihuahuas aren’t for everyone. If you want the “traditional” dog experience — playing fetch in the yard, happily greeting every person they see, etc. — then a Chihuahua is the wrong choice. They’re more like accessories that demand attention than regular dogs, but that’s part of their charm.

You’ll either love them or hate them, but if you love them, you’ll love them.

Personality / Character between Male or Female

Compared to females, males tend to be much clingier and more insecure. They’ll hate to be away from their owners, and while they’re with you, they’ll want near-constant reassurances that you still love them. This can be incredibly endearing, but it also gets old.

Males tend to mature physically faster than females but compensate by taking longer to grow emotionally. They stay puppy-like for quite a while after a female would likely have calmed down.

That makes them harder to train. They’d rather play or soak up affection than learn new tricks, and males are likelier to misbehave.

Boys are more likely to accept your entire family than females are, though, and less likely to become attached to a single person. They’re more likely to protect everyone in their pack, so if you want some semblance of a guard dog from your Chihuahua, a male is a way to go. However, they’re not great with other dogs, so they’re best for one-dog families.

Males are harder to train than females are. Any time with you is time that they’ll expect to be spent petting or playing with them, and they’re not likely to want to get down to business.

That’s no reason to ignore their training, however. They can be aggressive and snappy if left unchecked, so you’ll need to train and socialize them as quickly and thoroughly as possible.

Keeping them focused will be difficult, though, and many people make the mistake of trying to bribe them with treats to keep their eyes on the prize. That’s a mistake because it doesn’t take much to fatten these pups, and obesity is terrible for them.

A better strategy is to use the affection they crave to entice them to behave. Don’t punish them or use other punitive measures. But instead, use attention as favorable reinforcement. Every time they act, lavish them with praise and pets, and they’ll be happy to cooperate soon enough.

For the most part, males and females have equal health risks. The most significant differences are sex-based — meaning males are much more likely to suffer from conditions like undescended testicles than females are.

Many health issues can be mitigated by having your dog fixed or teaching them proper manners. If they eat a healthy diet and stay out of fights they can’t win, they’re much more likely to reach their entire lifespan.

If you’re looking to breed a Chihuahua, you can start much earlier with a male. They reach sexual maturity at around 7 or 8 months old, but you should wait until they’re at least one year old before you start breeding them.

This enables them to fully mature sexually, and these dogs will stay in their sexual primes from 1 year old until they’re about 5. After that, the sperm begins to weaken, making it less likely that any specific round of breeding will result in a pregnancy.

That’s not to say that older males can’t be used as breeders, but they won’t have the same odds of creating a pregnancy as using a younger stud will.

Female Chihuahuas aren’t quite as warm and fuzzy as males are, and they can be pretty standoffish with everyone except their favorite human. They don’t demand as much attention and are likelier to be happy when left to their devices.

They also mature much faster than their male counterparts, so you won’t have as much “puppydom” to enjoy with females. They’ll be calmer and less likely to react aggressively toward strangers or other dogs.

That doesn’t make them warm and fuzzy, however. They’ll likely recoil from attempts at affection offered by strangers, and they’re still happier being the only dog in the household. Even within your own family, don’t be surprised if they turn their noses up at your spouse and kids to spend time with you.

If you want a dog capable of keeping to itself without needing a constant supply of attention, then a female is the way to go.

Female Chihuahuas are usually easier to train because they tend to be less distractible than their male counterparts. They also mature faster, emotionally speaking, enabling them to focus on the task rather than be distracted by every little thing that crosses their path.

It can be harder to make them care about training, though. They tend to be less food-motivated than males, and since they don’t crave affection, you can’t bribe them with love.

As a result, training sessions with females tend to be shorter yet more productive. There’s less struggle to get them to follow orders, but if you stretch the session too long, you’ll lose them entirely.

Like males, females need extensive socialization, and you should only train them using positive reinforcement methods.

If you have your female Chihuahua spayed in a timely fashion, they’re not likely to suffer from any specific health issues that males don’t also sustain. They’re less likely to suffer trauma, although females are also known to get themselves in trouble with bigger dogs.

If you don’t have your female pup spayed, however, you’ll leave her at higher risk of suffering from mammary cancer, ovarian cysts, and the pain and discomfort that comes with the menstruation cycle.

Remember that if you don’t have your dog fixed, they’re much more likely to have behavioral problems, suffer from all sorts of cancers, and run away from home.

Breeding a female Chihuahua can be surprisingly challenging. Due to their tiny bodies and gigantic heads, C-sections are often required so that breeding can be expensive and complicated.

You can start breeding females at around two years old, although many experts recommend waiting until they’re 3. You want them to reach full physical maturity — and remember, it takes the girls longer than it does the boys — because you like their hips and pelvic floor to be able to handle the strain of childbirth.

You’ll generally want the male Chihuahua to be smaller than the female when you breed them, reducing the likelihood that you’ll end up with puppies that are difficult for the mother to birth.

You should also retire them around six or so. If you stretch it out any longer, it can put a ton of strain on their back and hips, increasing the risk of all sorts of health issues later in life.

Which Sex Is Right for You?

Chihuahuas are fantastic dogs, and you can’t really go wrong with one, regardless of whether you bring home a boy or a girl. Don’t try to convince yourself that the dog’s sex doesn’t matter, though, as it can play a huge role in how they behave at home.

If you want a dog that demands as much attention as you can give it, get a male. However, understand that they’ll be clingy, a bit more prone to aggression, and harder to train due to their playful personalities.

On the other hand, females are calmer and more independent, but that may not be what you’re looking for from a dog. While easier than males, they can also be challenging to train, due mainly to how hard it is to find something that motivates them.

At the end of the day, you’ll almost certainly be happy with whichever sex you bring home. If you’re not, too bad — that Chihuahua is already attached to you at the hip.